Looking back at the blocker stats from ToRD’s 2007 season, the prevalence of members of the Chicks Ahoy! and the Gore-Gore Rollergirls speaks to the dominance of the two teams. The Gores’ Lock N Roll would prove to be the most dominant blocker in ToRD’s first full season, registering in the top ten in all four major categories including leading in total assists (19), and coming second in both total hits (109) and knockdowns (25). Her value to the Gores was evident also in the fact that she was on the track for 63% of her team’s total track time.

The number of assists reflects a blocker/pivot’s total of whips, pushes and bulldozers. A couple of Gores held the top of the list, but the bottom half was dominated by the Chicks and Death Track Dolls. A lot of these names would become well known to ToRD fans in the coming seasons, with the Chicks blockers forming a sold core that continues to exits (for the most part) in 2010.

The amazing positional blocking and hitting of the Gores showed in the total hits category as they managed to lock up the top three spots. Brimstone Cowgirl makes her only appearance in these stats, but it’s a name that will become synonymous with solid blocking and confident pack leadership in ToRD. Tara Part had a solid showing too, part of a very consistent year for the Chicks’ blocker. The Gores’ Foxy Sinatra really ran away with this category, laying out more than double the number of hits than tenth place Aimee Zing.

While the Gores may have had more overall hits, the Chicks laid the most bodies down on the track accounting for five of the top ten spots in total knockdowns. Dolly Destructo, who also had a sold year jamming, shows up here, proving herself to be on of the most versatile ToRD players of 2007.  Mia Culprit made sure that the DVAS had representation in these stats also, showing up in three of the four categories. 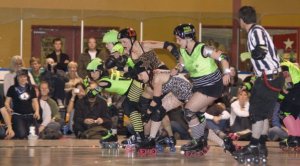 The 0-3 Bay Street Bruisers’ Chili Diablo takes her second category, while two Dolls round out the top three. But once again the Chicks flexed their collective muscle in this category; of the five girls in green represented, Nasher the Smasher and Mega Mouth put up the biggest knockdown percentages showing that despite all of the changes ToRD has gone through in the three years since its inaugural season, some things have stayed the same.

2008 stats are on their way; Beast of the East review/preview still to come too.