ToRD’S PRE-SEASON COMES TO A CLOSE IN  TRI-CITY

ToRD‘s 2010 preseason will end on Saturday May 8th in Kitchener, as The Tri-City Roller Girls host two ToRD teams in the “Psychedelic Melt Down” double header. The Chicks Ahoy! will get a quick chance at redemption after falling in the opening round of the Beast of the East for the second straight season, but they’ll be in tough against the Vicious Dishes who went 2-2 at the BOE and bowed out in a scrappy performance against La Racaille in the quarterfinals. The Dishes also looked good in their 157-53 season opening victory against The Venus Fly Tramps. The Tramps had a relatively successful BOE, which included a big victory of Rideau Valley’s Riot Squad and a tough loss to the Thames Fatales, but their one-sided season opening loss exposed some weaknesses.  The Death Track Dolls are also looking to bounce back after a surprising 0 and 2 exit in Montreal.

The Chicks have a talented and deep lineup and I don’t think we’ve seen the best of the this team yet. Missing key players, the Chicks looked as if they were just getting to know each other at the BOE, and I expect them to get better with each jam as the season goes on. A key for the Chicks will be to keep out of the penalty box to allow their pack to develop some chemistry and get comfortable on the track. There are some big hitters on this team, and they’ll need to be composed to keep physical threats like Bareleigh Legal, and po-

sitional threats like Anita Martini under control. The Chicks also have deep and varied choices at jammer with veteran skater Mach Wheels leading 2009 rookie of the year winner Kari Mia Beere and nominee Marvel S. Maven. Dependable veteran jammer Candy Crossbones can be counted on for consistency and triple threat Dyna Hurtcha will offer an intimidating physical presence at the jammer line.

After a shaky start, the Dolls started to come together in their second bout at this year’s BOE. This is another young team in the second year of a rebuilding process, and they’ll be relying on rookies to play big roles. Unfortunately for the Dolls, star jammer Land Shark will be out of the lineup with a knee injury. Look for Demolition Dawn to continue her return to jamming, and don’t be surprised to see Betty Bomber and maybe Audrey Hellborn wearing the star. Two rookies who who could get turns with the stars are the quick SlamWow and potential triple threat NutMeg.

Look for the recap next week.

The Oly Rollers continue to lead in the tough Western Region

WFTDA released its first quarter rankings for 2010, and DNN followed suit with its quarterly power rankings. Of course, the power rankings weren’t without controversy. While WFTDA stuck with regions, DNN ranked 2008 champions Gotham over current holders, The Oly Rollers in its top 25. This seemed to be based on a comparative margin of victory over a shared opponent (in this case being Charm City). Nonetheless, Oly still looks virtually unbeatable and will continue their unrelenting pursuit of the record for consecutive WFTDA sanctioned victories (the current record is Gotham’s 18, Oly is at 15). Next up on the march is the Boston Massacre, and then, on June 5th, Oly will face the Texas Rollergirls in a rematch of last year’s WFTDA nationals in what will undoubtedly be the most talked about bout of 2010 so far. More controversy arose in Montreal’s 25th place ranking, as many people seem to think that their recent dominant string of victories should have placed them in a better spot.

The only change in the top 5 on the Pacific, is Rose City’s retaking 4th spot from it’s Washington state counterpart, Rat City. Oly, Denver, and Rocky Mountain held on to the top three spots. These three teams all finished in the top four of the 2009 WFTDA Nationals, concluding a dominating performance by the Western Region teams that seems to continue today. Rose City, Rat City and Oly all beat Charm City on its recent west coast road trip to show that the west isn’t relenting any time soon.

There wasn’t much change at all in WFTDAs most overlooked division (top team Windy City ranked only 9th in DNN’s power ranking). The only change in the top five is Brew City’s taking of 5th place over North Star Roller Girls. Hammer City was unable to improve on its 17th spot after tough losses to Fort Wayne and Montreal.

The Texas Rollergirls continue their dominance of the South Central. The girls from Austin just keep putting together solid teams, and are currently ranked 3rd in DNN’s Power Rankings. Kansas City remains 2nd in the south, while the only change is Nashville’s entry into the top 5 at the expense of Houston. 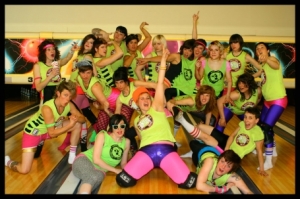 New Skids on the Block

The biggest change in the East comes not in the top 5 (although Steel City did leap two spaces to sneak into 5th), but in Montreal’s tremendous progress. Currently ranked 9th (up from 13th at the beginning of the year), only two weeks ago, Montreal’s New Skids on the Block scored a smothering 135-29 victory over 6th ranked Carolina. If Montreal manages another big victory this weekend over 8th ranked Dutchland, they would have to be considered, at the very least, a dark horse contender in the East. But if they continue to adapt and develop at the same pace that they did in the first quarter of 2010, the just may be an unstoppable force by September.

This past weekend GTA’s Derby Debutantes hosted Edmonton’s E-Ville Dead for another east-west roller  derby showdown. The bout started very close with GTA jammers Cleave Holt!, Getcha Kicks, and LeeWay Wreck’em going skate to skate with their E-Ville counterparts. But as the first half progressed, E-Ville’s Mary F’n Sunshine, Cheeky and Jenuine Draft started winning more and more of the jams, allowing Edmonton to open up a   66-48 halftime lead. In the second half, Edmonton started to dominate physically with Peaches throwing some big hits and BGF Hoochie controlling things up front. Despite a huge second-half effort by GTA’s Bruise Berry Pie and an almost desperate  determination by Daisy Dukes-it-out, Edmonton skated away with a 116-79 victory. You can watch highlights and skater interviews here. 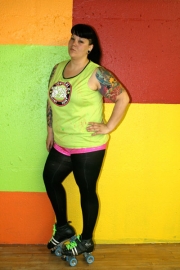 And finally, word on the track is that MTLRD’s battle to legalize Trash N Smash has reached a successful conclusion. This means that Trash will now be able to head south to help the New Skids On The Block continue their quick ascent through the WFTDA rankings. We  had the pleasure of seeing Trash play for the Skids in Toronto at last month’s Quad City Chaos and are all well aware of what she brings to that team on and off the track.

Congratulations Trash! US Border Services has no idea the punishment they’ve just unleashed on their unsuspecting American rollergirls…