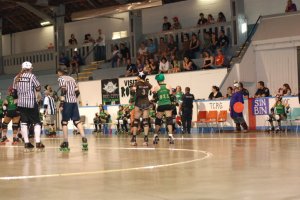 The residents of tiny New Hamburg, Ontario may not be quite aware of the gem of a roller derby team that they have tucked away in this rural location. But they seemed to be catching on. Coming off of a hard-fought loss to MTLRD‘s Contrabanditas to open the 2010 season, the Tri-City Thunder played host to the Roc City Roc Stars this Saturday night, and despite a tough opponent, showed moments of brilliance on their way to a strategic 87-66 victory.

Points were hard to come by in the early going. Lippy Wrongstockings, Kitty Krasher and Cellblock Bettie led TCRG to the early advantage in jammer leads, the scrappy Thea Pocalypse and the quick Toxic Dioxin wouldn’t allow them to convert the advantage into a lead (Roc led 22-19 twenty minutes into the half). Big hits were thrown on both sides with Greta Garbage (TCRG) and Stabitty Ann (Roc City) leading the way with some big jammer take outs early on. Anita Martini, Sin-E-Star and Barleigh Legal put in heroic performances in the first half, as one , two (or all of them!) constantly seemed to be on the track. Jill Standing continued her great play with the stripe, matching up well against Roc City’s Reisdent Eva and Paraliza Minelli. Neither team seemed capable of pulling ahead, but a final-jam grand slam allowed Roc City to take a 37-32 lead into the second half.

Despite being down, Thunder came out flying in the second half and a 6 point jam by Cellblock Bettie saw Tri-City take the lead. Fantastic positional blocking from Tater Tot and Lethal Lorelei, accurate sniping from Roxy D. Sniper and a great all-around effort by Asa Clubs helped Roc City stay close, but strong jams from Kitty Krasher, Bettie and Skate Pastor kept things under control for the hosts. Gunmoll Mindy also made the most of her limited opportunities putting in some effective jams in the pack. In the end, the differences were the discipline and the pack control from the veteran Thunder players. Bareleigh Legal was a brutal force all night forming a great one-two punch with Sin-E-Star while Martini and Jill Standing controlled things positionally. The Thunder were able to open things up late in the second half and eventually pulled away, holding on for an 87-66 victory.

Only two bouts into the 2010 season, and the Thunder look impressive already. Currently Canada’s only WFTDA apprentice league, Tri-City’s all star team is definitely one to watch; it has been getting better almost by the jam and is certainly an emerging power in Eastern Canadian Roller Derby.

And in other action…

Montreal opened its home team regular season this Saturday with a historic upset. After years of playing the third wheel to La Racaille and Les Filles Du Roi, MTLRD’s original team has finally clawed its way back to the top. In what by all accounts was an epic bout (maybe one of the great bouts in these early years of Canadian roller derby) Les Contrabanditas (led by the likes of Georgia W. Tush, Ewan Wotarmy and Trash N Smash) upset defending champions FDR (featuring Jess Bandit, Lady-J and Smack Daddy) in a one-point nail biter 104-103. This could be a sign of things to come in what promises to be an astonishing home season in Montreal. In Hamilton, Hammer City’s rebuilt Death Row Dames continues its great 2010 after a 153-114 victory over London’s Thames Fatales. And finally, make it two-for-two for GTAR‘s freshwomen team, Chrome Mollys, who put up another big offensive performance by defeating the Rollergettes 184-118: an impressive set of victories for this recently created squad.