Comparatively speaking, the Tri-City Roller Girls (TCRG) are the new kids on the block in Canadian competitive roller derby. As a burgeoning power in the east (and a WFTDA apprentice league), they are following the road paved by their big sisters in Hammer City, Canada’s original flat track roller derby league. The debt that the sport and its practitioners in Canada owe the Hammer City Roller Girls is great. On Saturday night TCRG’s two hometeams paid their respects by heading across the province to engage in on-track battle: The apprentice versus the mentor; the results: an excellent display of the evolution of the sport.

Despite the lack of a few key veterans on either side, this bout had all the promise of a great one. A reordered Dames lineup has found some success this season (particularly at the Beast of the East), and is certainly one of the strongest lineups this team has ever put on the track. The Dishes, on the other hand, have stuck with a core that has slowly evolved into a great hometeam. With a big part of their travel team (The Thunder) leading the pack for the Dishes, the Dames were never fully able to wrestle control away from them and were doubled up in the end.

Jill Standing with a big jammer take out on Mean Little Mama.

Cut Off got things off to a great start for the Dames, and got the best of Motorhead Molly on the jam line throughout the first half. But that early 2-0 lead was quickly eradicated when the Dishes pack were able to take control. With emerging power pivot Jill Standing leading the way, Skate Pastor scored a double grandslam to take a lead that the Dishes would not relent. Points were hard to come by in the early going, a sign that the Dishes were controlling as TCRG has shown a penchant for thriving in scrappy, defensive, low-scoring bouts. For the Dames, Lock N Roll seems to have returned to her traditional role as pivot and was an effective physical presence all night often trading jammer take outs with sin-e-star. Veteran Ivy Rupted also ran things well for the Dames, and Cut Off was their best weapon throughout the first half. Anita Martini was once again key for the Dishes, and by the time she scored a massive jammer take out on Bitchslap Barbie (who took her share of knocks in the opening half), the Dishes were looking like they were going to run away with it (the score was 48-11 with less than ten minutes to go). But on the final jam of the half, with fired-up vet Barbie at the jam line hungry for redemption after a rough half, the Dames got a power jam and played it brilliantly. They set a solid trap, slowed the pack and frustrated the Dishes (who also went down two in the pack in the midst of it) and manged to narrow the score to 58-31 at the half. 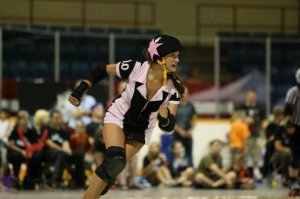 Skate Pastor was a key jammer for the Vicious Dishes.

Some of the Dames vets came out driven  in the second half, hoping to build on the momentum. Miss Carriage and Lock with the stripe, Mean Little Mama with the star and Barbie doing a little bit of everything, led the push back. But it was not to be. The Dishes look increasingly well organized, and were able to adjust to the Dames’ counter attack. Matching Skate Pastor up against Cut Off neutralized the jammer who’d done the most damage for the Dames in the first half, and Stobbelicious had somewhat of a breakout bout putting up some nice numbers from the jam line. And although the big three in the pack (Bareleigh Legal, Anita and sin-e-star) still carried the work load, better management at pivot (rotating Great Garbage and Jill Standing in particular) allowed both to be consistent forces throughout the bout. Although the Dishes ended up pulling away with a 100-50 victory, it was, on all sides, a great display of how far flat track roller derby has come. Fantastic pack control (whether it be isolation and trapping or defensive pacing), big, clean hits and cagey jammers (add a touch of attitude and posturing to the mix), this bout had it all.

While one could argue that the Steel City Tank Girls was Hammer City’s original team, it is the Harlots who gained much wider recognition in the early going, winning The Betties D-Day in Toronto and Montreal’s inaugural Beast of the East. While there are a few remaining veterans from those days, this is a shiny new Harlots team full of youth and emerging players who are in the process of returning this team to its former glory. The Tramps, on the other hand, is a team in the midst of its initial rise, and a team that seems to be improving each bout.

Early on it was the veteran jammer trio of Vicadoom, Dicey and Perky Set who got things off to a great start for the Harlots, taking the first five leads and building an early advantage for the team. But teams on the rise must have rising stars, and in this bout it was Cell Block Bettie who stepped up for the Tramps. 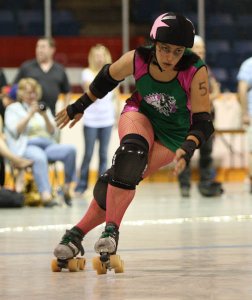 Bettie, who has also been a standout recently for the Thunder, was a key jammer all night for the tramps, leading Konky and Kitty Krasher (with Leighzzie Borden coming on strong in the second half). She also proved to be a capable matchup against the Harlot’s physical jammer, Vicadoom, a further sign of her growing abilities and confidence. Led by strong jams, The Tramps were able to stay within reach, and with just under 10 minutes left in the first, they found themselves on a power jam and down 36-19. In what may have been the turning point in the bout, the Harlots’ Scooby Doom pivoted an excellent defensive pack on the jam, not only denying the Tramps points but actually holding them off until Perky Set returned from the box and took the lead jam. Harlots led 56-26 at the half.

The Harlots went out with a vet heavy lineup in the second half in an attempt to preserve the lead. Chainsaw Mary continued her strong return to form in 2010 with an extremely physical bout, including forcing two jammer take outs against Leighzzie deep in the second half, that allowed the Harlots to put some distance between themselves and the Tramps. But the Tramps never backed down form the challenge. Lillith No Fair and Freudian Whip both had great bouts in the pack for the Tramps, and Gunmoll Mindy continues to develop into an excellent, dependable blocker. As a consolation for their great effort, Konky was able to take to the lead on the final jam, and a jammer take out from Dicey forced the call and ended the bout, a 114-66 victory for the Hamilton Harlots.

NOTE: Carla Coma was a noticeable absence from the Harlots’ lineup, and word on the track is that she has hung up her skates, which is a loss for all roller derby fans and skaters. Truly a legend in early Canadian flat track roller derby;  if there were a Hall of Fame, she’d be well on her way.

Montreal continued its extraordinary home season with another classic bout between two amazing teams. With a birth in the final on the line, the last two MTLRD champions faced off. Having lost their opening bout of the season, defending champs Les Filles du Roi needed a victory, and one by a fairly comfortable margin, to get through; 2008 champs La Racaille, who were coming off of a tight victory over Les Contrabanditas, needed any victory to secure their spot. FDR got off to a fast start securing an early lead that they would defend for the whole bout. A late tactical error by La Racaille and a fifteen point jam by Smack Daddy ended La Racaille’s hopes for a shop at the championship. FDR will battle the Ditas on August 7th for the MTLRD championship. Last time these two teams faced each other it was a one-point classic. No reason to expect anything different in the final.