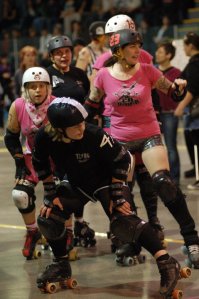 It was the end of Oktoberfest in the Tri-City area on Saturday night, and that festive atmosphere extended all the way to New Hamburg Arena where Toronto had come to town to play the hometown Thunder in a highly anticipated bout. The upstart Tri-City Roller Girls have had a break-through year at all levels in 2010, and their commitment and dedication to reaching the highest stages of the sport was evident in this one as they dominated ToRD’s CN Power on their way to a statement-making 72 point victory.

Things started off tight, with each team attempting to get a feel for the other. CN Power’s Nasher the Smasher and Thunder’s Jill Standing began what would be some great early pivot battles as each team attempted to wrestle control of the bout away from the other. It was tight hitting, fast moving in the early going, and leads were traded seemingly by the jam. A big jammer take out from Mega Bouche and an athletic jam from Lunchbox (who would have some stunning battles with a physically/stylistically similar Motorhead Molly) had Toronto up 5-4 five minutes in. Tri-City’s vaunted pack control was countered in the early going by a combination of strong pivoting (Brim Stone overmatched Lillith NoFair early on), and heads-up jamming (Land Shark avoiding “eating the baby” in a game attempt by Skate Pastor and Anita Martini to drag her back to the pack). Toronto’s power game was firing on all cylinders, highlighted by successive jammer take-outs on Cell Block Bettie by Nasher and Betty Bomber which aided a Luncbox grand slam and gave Toronto a 13-9 lead ten minutes into the first half. But just as CN Power seemed to be imposing its will on the hosts, the Thunder started rolling.

Adjusting to their opponents pace and heavy hitting, the Thunder blockers dropped back and took over the back of the pack, relying on their jammers’ athleticism and endurance to get themselves through, while they focused on shutting down Toronto’s jammers; Skate Pastor quickly took back the lead for Tri-City. CN Power was slow to adjust to the pack shift and the Thunder jammers took advantage. Despite strong individual efforts from the Chicks Ahoy! quartet of Rebel Rock-It, Nasher, Mega and Tara Part (whose rapid return to form after a long layoff has been amazing), by the time Dyna Hurtcha and Lady Gagya took back the pack with force, the host team had opened up a 42-15 lead. Despite continuously scrappy jams from Defecaitlin and Land Shark, CN Power couldn’t get anything going offensively. Dyna Hurtcha came out to jam late in the half, and it paid off as she was able to fight through the dense wall of black at the back and out-muscle Motorhead Molly to shift the momentum back Toronto’s way, pulling them within striking distance, 44-26, at the half. 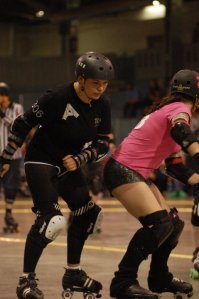 There was a particular tension in the crisp New Hamburg air during half time. With Toronto’s confidence seemingly restored, there was an expectation that the second half would see the same see-sawing action on the track. A key for these teams was to dictate the style and pace of the bout; the first half had seen control shift back and forth, and there was a sense that the team that could impose its will on the track in the early going would take the bout. From the very first jam of the second half, Thunder co-captain sin-e-star, who had an extraordinary bout, imposed her will in a big way. Teaming up with Cellblock Bettie, the two gave it to Dyna Hurtcha early on, compensating for the physicality the Toronto jammer had brought late in the first half. The captain’s performance would lead a huge second-half push back by the Tri-City pack. With Gunmoll Mindy holding the line brilliantly, Lillith NoFair settling into her role as pivot and Greta Garbage and Anita Martini working together to form some great walls, the Thunder took control of the pack and, very quickly, the bout.

But it wasn’t just the pack that shone for Tri-City on this night. Lippy Wrongstockings, Motorhead Molly and Skate Pastor all had strong performances jamming and were complemented nicely by Freudian Whip and Kitty Krasher. Skate Pastor and Motorhead Molly were solid in the pack, withstanding shoulders and sidestepping hips, while it was a Lippy 10 point power jam (well earned after a protracted one-on-one fight with a fiercely determined Brim Stone) that seemed to take the wind out of Toronto. Second-half penalty troubles for CN Power and well played power jams by Tri-City allowed the home to distance itself 90-29 half-way through the second. Thunder was absolutely relentless through the remainder of  the half, dominating the pack defensively, but also putting forth a sustained attack propelled by excellent pack-jammer communication, the combination of which seemed too much for Toronto at times. Defecaitlin had a strong last jam for CN Power, providing some consolation in a tough 122-50 loss.

This bout provided a glimpse into the future of Canadian roller derby, featuring two of Canada’s three WFTDA apprentice leagues. With this victory, Tri-City has clearly put itself at the forefront of Canada’s WFTDA second-wave (after last year’s Hamilton/Montreal debuts). This was just the beginning of what will undoubtedly be a long history between these two teams, and if this really is a glimpse into the future of the sport in this country, then things are definitely headed in the right direction.