The 2010 rookie class is arguably the top rookie class so far in ToRD’s brief history. But with the re-emergence of the DVAS as an organized bouting squad of undrafted players and the growing popularity of Toronto Junior Roller Derby, the drafts are only going to get stronger and stronger every season.

That being said, putting together only a single line of rookies was extraordinarily difficult. But here it is, the 2010 All-Nerd Rookie Line:

While no Smoke City Betties made my starting 14, the rookie line—for obvious reasons—is full of Betties. With an overwhelming amount of rookies, the Betties’ first year skaters had no choice but to take on big roles both off and on the track. No skater epitomized this more than Sail Her Poon.

A rookie captain, Sail Her Poon showed comfort and poise on the track well beyond her experience. Skating in 42% of the Betties’ jams this season, Poon  would  spread that playing time across all three positions on the track. Despite being a rookie on an outmatched team, she managed to pick up the first JQ points of her career (finishing top ten in Jam %, points and points per jam). In the end, she split her time in the pack and jamming almost perfectly 50-50. This complete-track awareness is why Poon is wearing the stripe on the Rookie Line.

The Gore-Gore Rollergirls’ Hurlin’ Wall was the only rookie to make the Starting 14, so it shouldn’t be any surprise to see her here. A strong positional jammer whose timing got better as the season went on, Hurlin has the athleticism and track sense to be a complete pack player. The sole rookie on the Chicks Ahoy! this year, Marmighty, also makes the cut. Marmighty got a crash course in derby on a Chicks squad loaded with veterans and it showed in her play. Starting off strong positionally, she finished a +/- of+91, and it didn’t take the New Zealand import long to get confident with her physical game either, and finished third

on the Chicks in blocks and fourth in knockdowns; able to muscle her way into prominence on a stacked lineup. Lastly, another member of the Betties’ rookie class, Grim Avenger. From the opening bout (in which she skated 15 of her teams’ 37 jams) Grim was expected to play a big role in the Betties pack: she played up to those expectations. By the final bout of the regular season she was wearing the stripe and leading packs (she would be an integral part of the Betties’ strong playoff performance against the Gores as well). 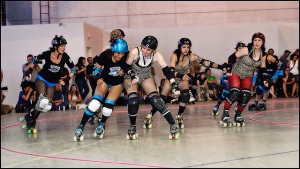 ToRD has developed into a tough league to be a rookie jammer in. The most that you can ask for is for her to endure and, hopefully, keep getting up. Tropic Thunder accomplished that and more for the Betties this year. From her breakout performance at the Fresh Meat Scrimmage during last year’s off season to the triple-threat role she played in the opening bout, Tropic Thunder became an integral part of the Betties’ attack by the end of the season and ended up jamming 25% of her teams’ jams on the season. She also led her team in scoring in the Betties’ final two regular season bouts of 2010. She is the third Bettie on this team and one of many who form the solid foundation for the Betties’ future.

Recap the The All-Nerd Starting 14 here.