In 2010, the Death Track Dolls picked up their first regular season win since 2008.

Things got off to a shaky start for the Death Track Dolls when they surprisingly went two and done at the 2010 Beast of the East, but an encouraging exhibition win over Tri-City’s Venus Fly Tramps set the Dolls up for a solid 2010 in which they improved as the season progressed. Glimpses of brilliance (in another regular season nail-biter with the Chicks; in the first half of the bout against the Gores) seemed to indicate that the “rebuilding process” that had been going on since a devastating 2008 playoff loss was finally coming to an end. With a solid core, strong leadership, and a team identity beginning to form, the Dolls seem set for 2011.

Speedee Ramone (seen here in 2009) returns after a single-season retirement.

The key for the 2011 Dolls is consistency. With 16 skaters returning from last year’s squad there is a familiarity among the team members that should be a huge advantage on the track. Plus, after last year’s successful reintegration of Jubilee, another former Doll is coming out of retirement for another shot at the Boot. Speedee Ramone returns after watching 2010 from the sidelines and her experience makes her an easy fit with this increasingly veteran team. When asked about draft decisions, co-captain Betty Bomber said that the Dolls have shifted focus: “Our goal last year was to fill in positional gaps. But this year the team understands that you need to know each position before you’re dominant in one. So our strategy going into draft selections were attitude, progress, and sportsmanship.” That strategy brought the Dolls three skaters whose development will be aided by not having the pressure to perform immediately. Despite not drafting for positions, Bomber also acknowledged that the skaters are quickly settling into potential roles on the track. She referred to Santilly In Yo Face as a “naturally aggressive athlete,” suggesting a skill set potentially suited to jamming, and pointed out that Nyght Ryder already looks comfortable in a pack. A “determined” Kat Atak rounds out the rookie threesome for the Dolls this season.

The major loss the Dolls are facing is to injury. Injured since the end of the last year’s regular season, triple threat Audrey Hellborn remains sidelined after surgery. Audrey was on the track for 52% of the Dolls’ regular season jams last year and averaged 3.2 points per jam as a jammer. This game changer’s absence was noticeable in the Dolls’ semifinal loss to the Chicks Ahoy!, and it will undoubtedly be felt this season as well.

Betty Bomber will be key for the Dolls at every position.

With only three rookies, look for returning bench bosses the Big Chees and Sonic Doom to try to fill holes from within. With the loss of Audrey, Betty Bomber will begin the season as the team’s sole triple threat, a role she thrived in last season.

Pivots: Last year’s leading pivots Panty Hoser and Monichrome return. Dolly Parts’em looks to bounce back after an injury plagued 2010 that saw her miss the first two bouts of the season. She came back as a blocker for the final bout of the regular season but has the chops to lead the pack. Betty Bomber notes that second-year skater Sinead O’Clobber’s confidence has really grown and that in the preseason is “taking initiative in becoming a strong pivot.”

Blockers: Even with the loss of heavy hitter Audrey Hellborn,  the Dolls still pack a punch. Once she got her skate legs back, Jubilee had a monster season in the pack taking on an increasingly big role as 2010 progressed. ToRD vet Seka Destroy and original Doll Bonky Kong are also solid blockers with sharp striking ability. Veterans Lucid Lou and Sue Saint Marie, along with third-year blocker Downright Dirty Dawson, lead an increasingly solid core of positional blockers that will be bolstered by quickly improving sophomore skater Speedin Hawking. “Speedin’s pretty ambitious,” Bomber said, “and has been working hard coming up to these last days before our game. I foresee a dazzling future for Hawking this season.”

Jammers: Once again the offense will be lead by Land Shark, who has grown into one of the most reliable jammers in the league. When she’s on her game there aren’t many who can keep up and will be key to the Dolls realizing their high ambitions for the season. As with last season, look for her offensive backup to be provided by committee. Demolition Dawn took on a lot of the load in key bouts against the Chicks and Gores last season; and of all three positions, Betty Bomber improved the most as a reliable jammer (joining Land Shark in the 100 point/50% lead percentage club and picking up a lot of JQ points along the way). In her rookie year, SlamWow donned the star at least once in all the bouts, and could potentially continue her apprenticeship. And although she’s become important to the pack, Jubilee has a history with the star as well, including finishing with a Top 10 JQ rating in 2007 and could make for an aggressive jammer.

From the Archives: Bambi and Land Shark will continue a jammer battle that began in 2008.

Expectations are high for 2011. “The Dolls are filled with smart, hardworking skaters and I’d like to see us make an imprint this year as the team to beat,” Bomber says with confidence, as she should. This season could represent a narrow opening in a small window. With such a veteran lineup, much of which has been together for two full season now, the time is now for the Death Track Dolls. With the goal to be a strategic team that relies on smarts rather than brawn and speed, much relies on the ability of the team to stay focused on the track and how much they are able to impose their play on an opponent. But at the same time, they have to be able to adjust when things aren’t going well. Last year after two strong bouts to open the season, the Dolls seemed on the verge of a major upset when they had the Gore-Gore Rollergirls on the ropes in the first half only to see the Gores go the dressing room, make some serious half-time adjustments, and then dominate the second half. It was a lesson learned for the Dolls and one that could actually help them this season. When asked about that challenging bout with the Dolls, Gores captain Brim Stone acknowledged that if the Dolls remain focused, the league could be in trouble. “There is so much potential on that team, and they have some of the best jammers in the league,” she pointed out, naming Land Shark and Betty Bomber in particular. “Their drive to win seemed to build over the year, and if they can maintain that drive they will be serious contenders for the Boot!” 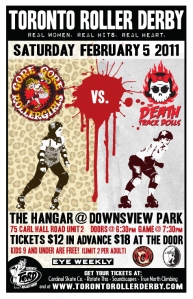 – Audrey picked up the most minor penalties (28) and served a team-high 10 minutes, while Hoser had 6 majors, more than any other Doll.