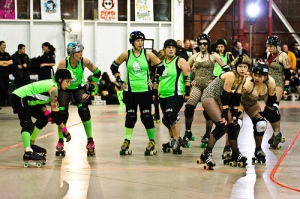 In 2010 the Chicks played in their third championship in 4 years (all against the Gore-Gore Rollergirls). (Photo by Kevin Konnyu)

After a championship run in ’08 was followed by a disappointing ’09 that saw them eke out a 3rd place finish with a last-gasp victory over the Death Track Dolls, it seemed like that talented squad of Chicks Ahoy! who’d gone to back-to-back finals had run its course. But electing instead to shore up holes in the lineup with veteran free agents as opposed to dipping into the draft, the Chicks seemed committed to making one more run to the boot in 2010. And it paid off.

Despite a shaky start to the season, the experienced group of Chicks gelled as the season went on and looked primed for the playoffs after ending their regular season with a record-setting 224 point romp over the Smoke City Betties. They answered their remaining skeptics with a confident 36 point victory over the Dolls in the semifinals (the previous two bouts between these opponents had gone down to the wire). But The Boot would be out of reach for the Chicks as they were dominated defensively in the final, only able to put up 31 points in a one-sided loss. With such a veteran lineup incapable of making taking that final step, change was in the air. 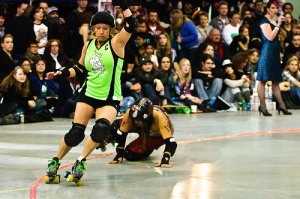 2011 marks the greatest change for the Chicks Ahoy! in its history. League stalwart Fubar Bundy, veterans Fireweed and Blammo, talented jammers Kari Mia Beere and Marvellous Maven, and fresh export Crimson Shivers are all gone from the lineup. But the biggest loss, is that of Mach Wheels. The most talented skater in ToRD’s early history, Mach Wheels became ToRD’s quintessential all star and defined the triple threat role that has become so prominent on ToRD teams. Her knowledge and experience helped shape Toronto Roller Derby and her leaving will be felt throughout the league; co-captain Candy Crossbones, a veteran of many battles with Mach Wheels, has admitted that the team is still recovering from that change.

But with change comes the necessary injection of fresh faces, something that the Chicks haven’t had in a while, and this has brought a new positive dynamic to the team. “Having so many new, hyper-enthusiastic skaters has really reminded everyone else why we love derby and how much we like to skate together,” Candy said, expressing an upbeat mood for the team.  “It’s really brought team morale up a lot.” With six new faces added to the roster via draft, this is clearly a new Chicks Ahoy! 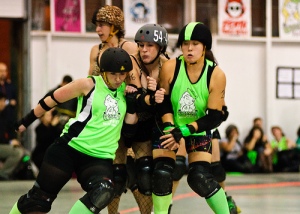 Marmighty and Nasher the Smasher both had big years in the pack last season.(Photo by Kevin Konnyu)

The Chicks also added new blood on the bench, and after a year-long apprenticeship spent closely analysing the sport, Flyin’ Bryan Killman will be making his ToRD debut this season as the Chicks’ new bench manager. He’ll have a talented pool from which to build lines.

Pivots: Even with the off-season changes, this is a team that looks strong up front. Rebel Rock-It and Nasher the Smasher, two of the league’s top pivots, return in 2011 to lead the pack, while co- captain Tara Part will also be involved up front. Over 2010, however, Mega Bouche took on an increasingly versatile role in the pack, and ended the year second in pivot percentage on the team. While it remains to be seen whether or not a rookie can step up to pivot so early in her career, Snappin Cooter could be a preseason consideration. “She has a great sense for what’s going on around her,” Candy Crossbones says of the newcomer, pointing out that she is a noticeably improving each practice. 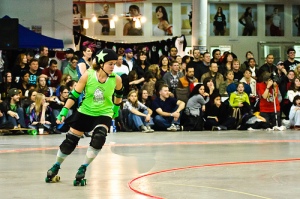 Candy Crossbones has been one of ToRD's most consistent jammers. (Photo by Kevin Konnyu)

Blockers: A good mix of experience (Cheri Nova, Furious Georgia) and youth (Marmighty), hard hitting strikers (Dolly Destructo, Dyna Hurtcha) and positional blockers (Hum Dinger, Hoff), this is a Chicks lineup that has a lot of depth in the pack. But this is also a position where a lot of players have the opportunity to step up. Candy Crossbones points to third-year blocker Robber Blind as a skater primed to have a breakout 2011.  Tess D’urb-Evil and Red Light Roxy are both showing signs of being natural pack players, and according to the Chicks captains, newcomer Bam Bam Hiterlow is living up to her name and is developing a “bad ass hit” that once perfected could be unstoppable.

Jammers: The position most affected by the losses in the lineup (Mach Wheels and Kari Mia Beere led the team in jam % last season), the Chicks’ attack will be a work in progress. Led by the dependable Candy Crossbones who is one of the top three four rated jammers in ToRD’s history, look for Dyna Hurtcha to take on more of a role with the star this season as the rookie crop develops. Although Rebel Rock-It has proved to be good for a record-setting jam here and there, and Dolly Dstructo has some history at the position, look for the Chicks to begin developing jammers out of the draft pool. Early on it looks as if Kookie Doe (who got some valuable experience in a recent exhibition bout in Ottawa) and Bala Reina are potential candidates. Candy Crossbones has compared Kookie Doe’s strong skating style to that of Mach Wheels, while Bala Reina is “fast and nimble” and is soaking up the strategies. 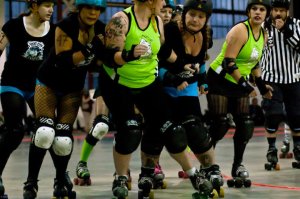 Last season's Betties vs. Chicks bout was a one-sided affair; this season's should be much closer. (Photo by Joe Mac)

With such change comes diminished expectations, which could actually play nicely into the hand of an exuberant, youthful team still bolstered by a strong veteran core. A fresh injection of youth may have been exactly what this Chicks team needed and if preseason fervor is any indication, the change has been positive. While they won’t dominate the upcoming season opener the way they dominated last year’s bout against the Betties, they could still enter the bout as favourites. Either way this bout will go a long way in describing how things could play out for ToRD in 2011. Free of the burden of high expectations, the Chicks Ahoy! could play loose and relaxed all year. Depending on how quickly and how well the fresh faces integrate, this Chicks team could be an intriguing story by the end of the season. 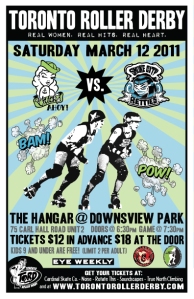 * Chicks play the Betties in the season opener for both teams on Saturday, March 12. Tickets for the bout are available online, or at various outlets down town. Doors of The Hangar open at 6:30, opening whistle at 7:30

*To get warmed up, you might want to got to layer9 to check out the defensive gem that these two teams put together in 2009 (68-61 for the Betties; this was also the first official bout played at the Hangar).