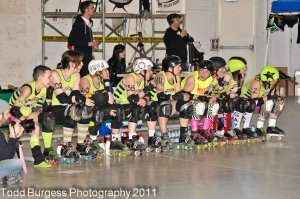 It must be hard to head into a tournament knowing that at some point on the weekend you will have to play in a bout that will amount to a one-sided shellacking, but that is the current state of Canadian roller derby where Montreal’s New Skids on the Block are playing on a competitive level that is unmatched in this country. But all credit goes to CN Power, Tri-City Thunder and Rideau Valley’s Vixens who entered their bouts against the defending Quad City Chaos title holders looking like nothing less than teams hungry for a victory. Despite how determined and confident the opposition may have been, for the second year in a row the Skids raised the bar on the competitive level of Canadian roller derby and cruised through their three games with an average margin of victory of 250 points (scoring a remarkable 860 total points) to win their second straight Quad City Chaos.

Thunder’s Motorhead Molly and Vixens’ Semi Precious continued to lead their teams at the QCC. (photo by Chrissie Wu)

The Skids have such a strong team that it is becoming increasingly more difficult to distinguish individual players; nonetheless, it is hard to argue that Jess Bandit and the Iron Wench are not the top players in their positions at this tournament, or in the country for that matter. In the same vein as the Oly Rollers’ pivot Sassy, Jess Bandit is the kind of player that you need to really study (and watch live) to see how dominant she can be, so simply effective that she almost slips under the radar. The Iron Wench’s brilliance may be easier to see, but it is no less impressive. For CN Power, team captain and on-track leader Brim Stone has emerged as a more-than-capable pivot in her own right and is a key in the resurgence of ToRD’s all stars. Somehow, just when you think that Defecaitlin (AKA: Dust Bunny) has achieved the pinnacle of her abilities, she steps it up another notch, this weekend having the best jammer battles with the Wench and dominating in her other bouts. Sin-e-star continues to be a solid, reliable presence in the Thunder pack, and even added “big-moment jammer” to her already impressive resume this weekend, providing an emotional spark to her team and an offensive boost when needed.

But the offense is getting a real boost from the ever-improving Motorhead Molly, a reliable, unshakeable presence on offense. Finally, the Vixens’ Semi Precious wouldn’t look out of place on any of the rosters at the QCC. A phenomenal talent in the pack (whether pivoting or acting as a rogue striker), the fortunes of this team will revolve around her play on the track. And while Rideau Valley’s offense continues to add depth, it is still anchored by the impressive Soul Rekker who was key for her team all weekend, especially leading the push back late in the bout against the Thunder.

Jubilee has really stepped it up for CN Power in 2011. (photo by Todd Burgess)

For the well-rounded Skids, the importance of both Cheese Grater and Lil’ Mama to the continued development of this team was obvious this weekend. Cheese Grater is the prototypical triple threat, and her increasing role with the stripe speaks to her importance on a team that defines itself by pack control. And while Lil’ Mama’s toughness has never been a question, with Ewan Wotarmy sidelined with an injury, her importance as jammer was highlighted, and she brought that same sort of toughness to jamming, often skating through opposing blockers. CN Power has improved so much that it’s difficult not to cite every member of the team for steppin’ it up. Dyna Hurthca continues to show an increased poise and discipline in the pack, while a suddenly squeaky clean Nasher the Smasher needs to be commended for her willingness and ability to go one-on-one with the Iron Wench. Finally, Jubilee, who once briefly retired from the sport, has not only come full circle in her return, but has surpassed herself. Her pack work has

gotten increasingly tighter and her ability to take opposing players out of jams—whether it be with sniper-like jammer take outs or strong positional blocking—has noticeably improved. Finally, for the Vixens, the offense as whole stepped it up. Soul Rekker is no longer the sole weapon on this team, as Dee Dee Tee looks fearless and Ripper A. Part is so much more effective now than she was a year ago that she actually looks physically bigger on the track. In the pack, the role of Surgical Strike (who stepped it up at the recent Blood and Thunder All Star bout at the Hangar) cannot be denied; she was one of the most capable Vixens’ blockers all weekend.

You have to look at the younger Skids to find a breakout player here, and with Mange Moi-El Cul and Hustle Rose playing up to high expectations, Hymen Danger was the surprising Skid this weekend, looking very strong in the bout against CN Power on Saturday night, and not looking at all out of place on the roster. For CN Power, the story of travel-team rookie Hurlin’ Wall is becoming an increasingly interesting narrative in Toronto Roller Derby. An absolutely unintimidated blocker, Hurlin’ does not know the word quit; already an impressive striker and one-on-one blocker, as her pack awareness increases, she will just become more and more of an important cog in the CN Power machine. For the Thunder, with the already important Freudian Whip taking on an increasingly foundational role for the team, it was Leigh-zzie Borden who was the real breakout story of the weekend. A force in the pack, Leigh-zzie also showed a proficiency with the star as well and provides yet another well-rounded skater to Tri-City’s already impressive roster. If you caught any of the Vixens’ bouts this weekend, it was impossible not to notice Assassinista. Whether leading her pack with the star, or blocking within it, AK-47 left it all on the track every time she was out there. An energetic, seemingly tireless player for Rideau Valley, she will be a big part of this team’s future.

Assassinista had a breakout tournament for the Vixens. (photo by Chrissie Wu)

While these tournaments don’t generate the same kind of fan-energy at the Hangar as regular bouts (they are long and often feature one-sided results) they are a necessary part of the growth of the sport in Canada, allowing eastern Canada’s three up-and-coming hometeams the ability to collect valuable track time against excellent competition. And the value of getting to play a team of the calibre of Montreal’s New Skids on the Block cannot be denied. It was their play at last year’s QCC that kicked off the strategic development of teams all across Canada (last year’s participant Vancouver has since begun to play in WFTDA’s Western Region), and it will certainly have the same effect this year, easing ToRD and Tri-City into WFTDA competition. For Rideau Valley, this marked the highest level of competition that they have faced and was certainly an excellent experience to kick off their WFTDA Apprenticeship. And of course for anyone who follows Canadian roller derby (whether you were at the Hangar or watching on the boutcast), it was an extraordinary display of the some of the finest roller derby this country has to offer.

** Canuck Derby TV came to town to boutcast the QCC in its entirety. You can watch the archived bouts here.  Stay tuned to ToRD.TV for interviews and layer9’s trackside boutcast.