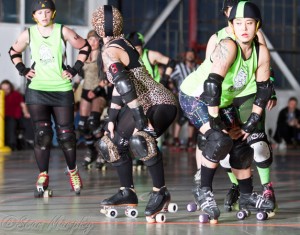 Gores and Chicks met in one of the most exciting bouts of the season. (photo by Sean Murphy)

After a few lacklustre affairs kicked off ToRD’s 2011 regular season, there was a lot of anticipation built up for this rematch between the opponents of last year’s Battle for the Boot 4. Although the Gore-Gore Rollergirls eventually grabbed this bout by the reins, it took no small effort. Despite the loss, the Chicks Ahoy! proved that they have come through a shake-up of the core of the club unscathed, and that their one-sided showing against the Smoke City Betties was no fluke. The difference may have been nearly 50 points by the bout’s end, but it certainly didn’t feel like it at the Hangar as the crowd was appreciative of the most exciting and competitive bout of the season.

After being overwhelmed the last time these two teams met, it was key that the Chicks come out strong in this one. And strong they did. A good set-play at the opening seemed to work nicely and if it weren’t for an inadvertent trip on Candy Crossbones, it would have worked. Nonetheless Candy was able to steal away points from lead-jammer Bambi on the opening jam to make it 3-2 out of the gates. That jam would set the tone for what would turn out to be a very competitive opening period. The Chicks didn’t change much from their big victory over the Betties, sticking with a similar lineup and continuing to apprentice rookie jammer Kookie Doe in what is turning out to be a breakout rookie season. Dyna Hurtcha once again led the way with the star providing physical difficulties for the Gores packs and putting up important points for her team early. But the Gores were with them every step of the way in the early going. Dust Bunny continues to look dominant in 2011, carrying her form from CN Power over into the ToRD regular season. Early on, the Gores stuck with the Dusty- Bambi-Brim Stone jamming trio that had been so successful against the Dolls, and at the beginning, at least, it held up with the Gores inching ahead 27-9 midway through the period. 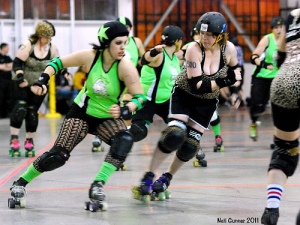 Dyna Hurtcha (pursued by Aston Martini) had another strong bout for the Chicks. (photo by Neil Gunner)

The Gores’ jammers were doing a good job of reeling in Chicks’ lead jammers to stay ahead in what became an increasing deadlock in the pack. Marmighty and Nasher the Smasher continued their strong play for the Chicks and Mega Bouche—spurred by a Toronto Argonauts led cheering section—had a solid bout as well. A well-executed power jam by Candy Crossbones brought the Chicks back into it (within 4, 35-31), which inspired a late first half push back that proved to be some of the best roller derby seen in ToRD yet this season. The much more disciplined Chicks seemed to take control of things at this point, their hits just slightly better-timed (and more smartly taken), and it was a punishing jammer take-out from Nasher the Smasher on Gores’ rookie Lulu Cthulu that allowed Kookie Doe to take lead, score points and put the Chicks in front for the first time in the bout, 39-35. The play continued to be back and forth for the rest of the half with the Gores eking out a 48-44 lead at the break. 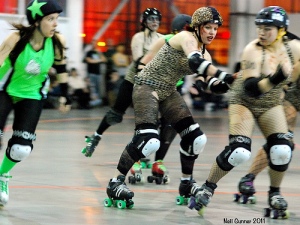 The Gore-Gore Rollergirls are the two-time defending champions for many reasons, but certainly one of them is their ability to adjust and adapt. And with things not going exactly as planned in the first half of this one, that is what they were able to do here. Veteran blocker Foxy Sinatra took on the stripe, and perhaps to an even greater effect, Brim Stone’s jamming experiment was at least put on hold as she took charge of the pack once again. But the Chicks were not going down lightly, and a Dyna Hurthca power jam kept it tight at 67-61.

Switching to a 1-2 jammer line could be a dangerous thing for some teams, but it’s a risk that the Gores can take when Dust Bunny and Bambi are those two jammers: over a series of jams midway through the half, the two jammers were central in allowing the Gores to put some distance between themselves and their opposition, 90-63–their most significant lead of the bout. Although there was some amazing offensive blocking from Mega Bouche and back-to-back Candy Crossbones and Dyna Hurtcha jams were able to pull the Chicks within 14, the Gores, though shaken, would not be broken. Aston Martini, Molly Boom and Lady Gagya were solid and consistent through to the end, and as a whole the Gores managed to maintain their level of play throughout, while the Chicks seemed to lose steam as the bout wound down, having thrown, seemingly, everything at the Gores that they could in what was a spirited, and hard-fought effort against the champs. 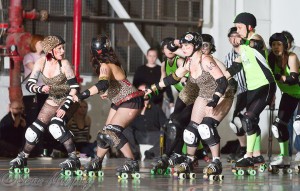 Gores, here holding a solid front wall, look like a pre-tournament front runner for Beast of the East. (photo by Sean Murphy)

With the win, the Gores move into first place overall and are one-victory-against-the-Betties away from securing top spot in the regular season and the bye to the championship final. The defending champs have now won 11 ToRD bouts in a row since 2008; their only losses in that span came against two Montreal teams at last year’s Beast of the East. Coincidentally, next up for the Gores is Montreal’s Beast of the East 2011, where they will enter the tournament as one of a few pre-tournament favourites. The Chicks Ahoy!, on the other hand, will have all eyes on next weekend’s critical showdown between the Death Track Dolls and the Smoke City Betties. With this loss, it looks all the more likely that they will be facing one of those teams in the semi-final.

Keep an eye on ToRD.TV for video recaps, layer9’s track side archive, and a special boutcast presentation as well. Stats page will be updated soon!