The top three teams at the 2011 Beast of the East (Slaughter Daughters, Gore-Gore Rollergirls and the Death Track Dolls). (Photography by Derek Lang)

Last year, at the 2010 Beast of the East, amidst all of that Montreal dominance, there were some major surprises. The Toronto Roller Derby League had a terrible tournament by their own standards, with the Smoke City Betties, Death Track Dolls (both 0-2), and Chicks Ahoy! (1-2) all eliminated unceremoniously in the first round. Similarly, Rideau Valley’s Slaughter Daughters—who had an amazing 2009 and came into the tournament with high hopes—were two and done on Saturday. At the 2011 Beast of the East it was a different story, as the Ontario teams were the talk of the tournament and the Slaughter Daughters would be the only squad to go through both days undefeated to deservedly hoist the award, that to trophy-designer Tommy Toxic’s credit, was the by far the most beastly yet created.

La Racaille (MTLRD) and The Derby Debutantes (GTAR) face off in the double elimination round.

The cliché is that records are made to be broken, and although coming into the tournament there was a lot of talk about parity among the top teams, records were set and then broken continuously on day one. It began right with the opening game of the tournament when the GTAR’s Derby Debutantes became the third team to lay down 100 points in a BOE bout with a 124-4 victory against BOE newcomers Les Duchesses de Quebec (who were playing their first-ever bout). It was just the beginning of record setting scores as four teams would be capable of putting down 100 points (the Debutantes would become the first team to have 100 points scored for and against in the same tournament). When all was said and done, it was Montreal’s new-look Contrabanditas setting all of the records in a 148-0 shutout against the GTAR’s Chrome Mollys (who were the second of three teams playing in their first BOE).

For the most part, the opening bouts of the double elimination round went as expected; if there was an upset, it would be the Death Track Dolls victory over the defending champion Filles du Roi (who were tracking an almost unrecognizably young lineup after MTLRD’s off season shake-up)—a bit of foreshadowing of the Dolls-as-Montreal-killers on the weekend. The top game of the opening round easily went to the much anticipated matchup between the Vicious Dishes and the Gore-Gore Rollergirls. Two of the pre-tournament favourites—the top teams from Tri-City and ToRD—did not disappoint. Although the two teams had never played before, there was considerable history built up in recent, tense bouts between the all star teams of the two leagues. This one came down to the final jam, with the Dishes pulling out a thrilling two-point victory.

The Dishes would also be involved in another close first round bout, on the losing end this time to the Ditas (27-21) although both teams would make it through to the round of eight. Joining them in the quarterfinals were the Ditas’ MTLRD league mates La Racaille (who went 2-0), and defending champs FDR who had to win a qualification showdown against the Derby Debutantes. The quarters were rounded out by the Slaughter Daughters and three Toronto teams, the perennial powerhouses Gore-Gore Rollergirls along with Chicks Ahoy! (first quarterfinal experience since 2008), and the Death Track Dolls who returned to the second round for the first time since 2009.

ToRD's Gore-Gore Rollergirls saved their best for day two, scoring one-sided victories in both the quarter and semifinals.

From the opening bout of the quarterfinals, it was clear that the top teams were able to step it up to another level when it mattered most. MTLRD’s La Racaille, who had a solid opening day, were dominated by the considerably more experienced Gores, 88-11, marking the first time that La Racaille, the most successful team in the tournament’s early history, would not qualify for the final. Two of the other bouts were somewhat one-sided as well, with the Slaughter Daughters throwing down their “A” game in a 71-3 victory, knocking out the defending champion Filles du Roi; similarly, pre-tournament favourites the Vicious Dishes just couldn’t ever wrestle momentum away from a very physical, very tight Chicks Ahoy! team, going down 48-8, in what was an extremely close bout until the Chicks were able to pull away on the strength of a well-executed power jam with Dyna Hurtcha sporting the star. 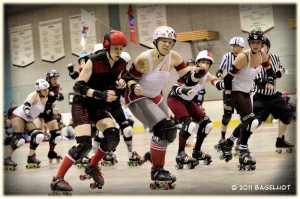 ToRD's Death Track Dolls recorded the biggest upset of the tournament in their quarterfinal win over MTLRD's Les Contrabanditas.

But it was the Death Track Dolls and Les Contrabanditas who would provide the greatest excitement in the second round. Montreal’s hopes were clearly on the backs of the experienced Ditas, who looked to be the strongest, most consistent team in day one of the tournament. The Dolls, on the other hand, were already pleased with a return to the second round of competition, which, regardless of what happened, qualified as a success. Not surprisingly, the experienced team from Toronto came into the bout loose and relaxed; taking advantage of early penalty troubles from the Ditas, the Death Track Dolls rode some consistent pack work and fine jamming from Land Shark and breakout player Santilly In Yo Face to an early lead that they would hold onto in the face of a considerable push back at the end of the bout, holding on for the 58-49 upset to push three of the four Toronto teams into the semifinals. 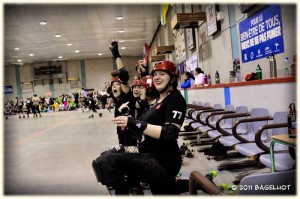 The Slaughter Daughters' bench watches the scoreboard during the final jam of the 2011 Beast of the East.

In the first all-ToRD semifinal, the Death Track Dolls just couldn’t summon the kind of performance that had led them to their win over the Ditas, what may have been the biggest victory in the team’s history. After a so-so Saturday that saw them hold on for a victory over Thames Fatales in a qualifying bout, the Gore-Gore Rollergirls continued to step it up on Sunday. They’d had some slow starts in the first round and certainly remedied that, pulling away from the Dolls early to qualify for their first ever BOE final. It was vindication of sorts for the team that has been the tops outside of Montreal for the past two years.

In the second semifinal, the Chicks Ahoy! continued their strong play on Sunday, creeping out to a slim 8-4 lead in what was another scrappy and defensive performance from the ToRD team. But the Slaughter Daughters showed the same kind of focus and determination that they had all tournament and stayed close, taking their first lead, 11-9, at the midway point of the bout. It would remain close through to the very end, with both teams displaying fantastic pace control defensively to keep things tight and low scoring. It was 19-19 with just under two minutes left when Soul Rekker took a lead on a hard-fought, slow moving jam that allowed her to pick up a double grand slam to break the stalemate and give the Daughters a 10-point lead that they defended, riding a 33-19 victory to advance to the finals.

The Death Track Dolls capped off a hugely successful tournament with a historic 42-31 victory over their ToRD rivals, Chicks Ahoy!, in the third place bout. The Chicks didn’t have much left in the tank, their previous two bouts being defensive grinders against very physical opponents. For the Dolls, it represented their first victory over the Chicks after some very close bouts over the past two seasons, and their best showing in this tournament.

When all was said and done, and 14 teams fell away, it was clear that the two best teams of the tournament remained. Rideau Valley’s Slaughter Daughters and ToRD’s Gore-Gore Rollergirls were set to make history as the combatants in the first ever all-Ontario final. The final lived up to and eventually surpassed all possible expectations, coming down to a remarkable final jam. Five-on-five these two teams were well matched, keeping the crowd guessing through numerous lead changes (including three on a Ripper A. Part vs. Bambi jam that had no lead called). What it came down to was special teams and who could take advantage on power jams. Despite leading by 16 at the start of the final jam, the Gore’s jammer Bambi took her fourth minor on her initial scoring pass to send the inexhaustible Soul Rekker on a power jam. Semi Precious and Assassinista led an indestructible trap that kept the pack crawling, and with only 9 seconds left, Soul Rekker was finally able to complete the comeback and take the 20110 Beast of the east 87-85. (*There seemed to be some confusion about scoring at the end, although it looked like Rekker made four, five-point scoring passes).

The Daughters were more than worthy champs, facing any style of play they encountered with confidence and adaptability. They had extraordinary depth at jammer (easily the top 1-2-3 jammer rotation in the tourney), and played special teams simply, but masterfully, owning pace lines and setting hard traps. 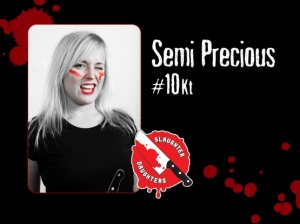 The Nerd's 2011 MVP: Semi Precious of the Slaughter Daughters

After last year’s pack-play-evolution, it was obvious that the team with the top pack would do very well this weekend: that was certainly the case with the champion Slaughter Daughters who could dole out timely punishing hits, positionally block one-on-one with the best of them, and set devastating traps. At the centre of it all was Semi Precious. Big-time recognition has been a long-time coming for this extraordinary blocker.

There were at least a few players in the running for this one, but once again, the packs were the difference all weekend and Assassinista was undeniably a force in the Daughters’ championship pack. This is almost a cumulative recognition for Assassinista whose play for both her hometeam and the travel team Vixens has been turning a lot of heads for some time. This weekend, she proved that she deserves recognition among the elite. 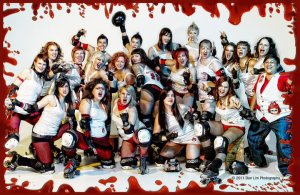 In 2009, Dolls’ star jammer Land Shark took home this recognition as a player; two years later, and she’s leading her team to the award. The Dolls recorded an early minor upset over a young FDR squad, and then looked lacklustre in a loss against leaguemates, the Chicks Ahoy!, but things got rolling in a must-win, 84-8 surprisingly dominant victory against the Riot Squad. A major upset over Les Contrabanditas in the quarterfinals, and a third place rematch win over the Chicks cemented this teams’ status as breakout team of the tourney.

* The Beast of the East in its entirety was boutcast live by Canuck Derby TV and has been archived for your viewing pleasure.  Keep an eye out for layer9’s trackside archive as well.

***A special thanks to Montreal Roller Derby who hosted another amazing tournament and Canuck Derby TV for making sure that everyone could see it.