The Chicks Ahoy! won their second ToRD championship and first since 2008.(Photo by Greg Russell)

After twelve consecutive victories spanning two years and back-to-back championships, the Gore-Gore Rollergirls fell in dramatic fashion at the 2011 Battle for the Boot against a determined Chicks Ahoy! team that put together one of the marquee performances in the team’s history on the way to a convincing 65 point victory and their first ToRD championship since 2008 (and second overall). For the remaining Chicks from that team, this win was an emotional return to the top, for the majority, however, this was their first taste of ultimate victory; but for all, it was a fitting bit of revenge, and a surprising turnaround from last year’s final when the Gores won the boot in a similar fashion.

The Chicks didn't change much from their dominant semifinal win, including the jammer rotation (Dyna Hurtcha with the star). (Photo by Kevin Konnyu)

Expectations for a fast-paced, tight bout were met early on as each team jockeyed for position from the opening whistle. Aside from a few small roster changes (veteran Dolly Destructo and rookie Red Light Roxy replaced Snapp’n Cooter and Bala Reina), the Chicks didn’t change anything from the semifinal bout against the Death Track Dolls. They kept together similar lines and blocker pairs in the pack, while sticking with the Candy Crossbones-Dyna Hurtcha-Kookie Doe jammer rotation that had served them so well all season long. The Gores, on the other hand, were coming into this one off of a long competitive layoff (after wrapping up first place and earning a bye directly to the final) and it showed in the first half. Narrowing down their jammer rotation to Bambi and Dust Bunny, the two star jammers were taking a beating from the Chicks blockers (Marmighty and Mega Bouche once again were a force at the back of the pack) and pivot Brim Stone was eventually thrown into the mix to see if she could have any success against the Chicks’ packs. 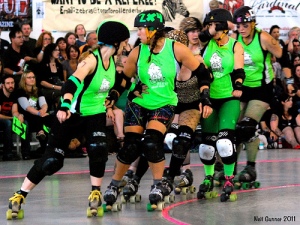 The Chicks asserted their pack dominance early on. (Photo by Neil Gunner)

The relentless pack control of the Chicks very quickly began to take its toll on the Gores whose packs looked stretched and overwhelmed early on, often forced into one-on-one battles that were routinely being won by the Chicks. About midway through the half, with the score tight and remarkably low, the momentum began to noticeably swing toward the Chicks. The frustration was evident on the Gores’ bench, as they found themselves in the unusual position of having a game slipping away from them. For a long stretch near the end of the first half the Gores simply could not get anything going and barely registered a point in the final fifteen minutes of the period as the Chicks threatened to run away with it, taking a 65-14 lead into the dressing room at half.

The Gores have faced some adversity on their recent run of dominance: a blown first half against the Death Track Dolls in 2010, and during the 2011 regular season this same Chicks team had the Gores on the ropes after the first half as well (albeit not in quite the same way). On both of those occasions the Gores were able to adjust quickly, make minor changes to strategy or lineups, and eventually run away with the victories. But as smart and adaptable a team as this Gores group is, the Chicks were simply rolling in this one, and were playing with a focused determination and a unified sense of purpose that was impossible to shake.

After being neutralized in the first half, Bambi faught back in the second. (Photo by Kevin Konnyu)

But to their credit, the Gores did not lay back and allow the Chicks an easy path to victory. After being smothered defensively in the first half, Bambi, ToRD’s regular season leading scorer, finally got her game going in the second, and rookie Lulu Cthulhu was also brought in to add a more physical component to the jamming corps. But the Chicks held the course, refusing to be thrown off the game that they had refined so well throughout the 2011 season. One major aspect of that refinement was their much-discussed discipline (in a surprising turnaround, the Chicks were the least penalized team in the league in 2011), and that showed in the championship game. A remarkably controlled second half saw the Chicks stay (for the most part) out of the box while it was the Gores’ blockers who were paraded to the box giving pack advantages to a Chicks team that was already having its way five on five (there were no power jams awarded in the bout–a testament to the talented jammers). 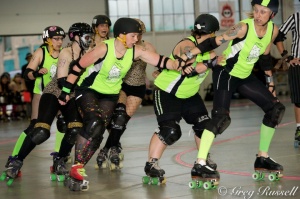 While as a whole the pack work was nearly seamless, there were some strong individual performances: Rebel Rock-It and Tara Part continue to impress with their on-track intelligence and leadership, while Nasher the Smasher continued to be a one-woman wall. But from the rookies (Red Light Roxy, Kookie Doe) to the vets (Robber Blind, Hoff, Furious Georgia and Humdinger) the Chicks lineup played remarkably well buying into, and steadfastly remaining in their roles throughout the bout, and although the Gores were able to make a game of it by slightly more than doubling their score in the second half, injuries to key blockers Foxy Sinatra and Aston Martini depleted a pack that was sorely overmatched to begin with and the Chicks were able to run out of the clock in the end, sailing away with the 111-46 victory to be named the Battle of the Boot winners and, deservingly, the 2011 Toronto Roller Derby Champions. 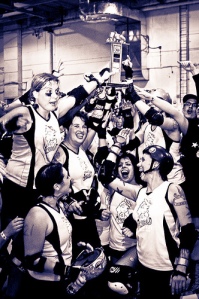 That draws to a conclusion another successful ToRD season. While there are changes to come in the off season, roller derby will continue to be played (keep an eye out for an increasingly full CN Power schedule as the team begins competition in WFTDA’s North Central Region, and watch out for a new crop of farm-team D-VAS who will begin their process of development as they lead up to the end-of-year draft). The Gores will undoubtedly return next year more focused and reinvigorated (it was a loss to the Chicks that sparked this latest winning streak), but the Chicks built this increasingly successful team around a solid core of well-selected rookies and a cagey group of veterans who certainly look prepared and capable of tracking a team that can defend the championship in 2012. But for now, and the months ahead, there is ample time for quiet reflection on what they have just accomplished.

***NOTE: Immediately after the game, five-year vet. G-Force announced her retirement from competitive level roller derby. G has certainly been a force of good for not only the Chicks, but ToRD as a whole, and so it is with great joy that we learn that she will remain with the league in a mentoring role. Congratulations on a career well played!

***If you missed this extraordinary bout, no need to fear! It will be broadcast on Rogers TV on Saturday, July 2nd, 2010 at 6:00 PM. ToRD will be organizing a

viewing party at Ciros at 1316 Bloor St. West (on the corner of Bloor and Lansdowne).

***Already missing flat track roller derby?! ToRD will be teaming with Toronto Pride once again to present the 3rd annual Clam Slam, an all-queer all-star game featuring skaters from some of the top leagues in North America. Last year’s bout was a fast-paced, high scoring bout and this year’s looks like it will be no different. Clam Slam 2011 is coming up on Thursday, June 30th. Doors at 6:30. Tickets available online or at a number of vendors in Toronto.