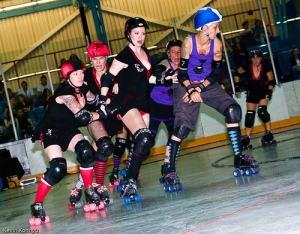 The D-VAS in 2008 featured current skaters Betty Bomber, Land Shark and Mia Culprit. (pictured in a bout against Rebel Rock-It and the Bay Street Bruisers). (Photo by Kevin Konnyu)

On June 16, 2007, The Deadly Viper Assassination Squad (D-VAS) defeated the Smoke City Betties 96-78 to win what was each team’s first ever bout in Toronto Roller Derby (ToRD). While the Smoke City Betties would quickly emerge as a contender in ToRD (reaching the semifinals in 2008 before Battling for the Boot in 2009), the D-VAS would struggle, posting a 2-6 record in ToRD’s frst two seasons before falling under the knife in ToRD’s 2009 contraction (when they and the Bay Street Bruisers folded). ToRD veteran Mia Culprit (and current Betty) was the first captain of the D-VAS and sports a tattoo of the logo on her right leg. “It was difficult to say goodbye,” she admits. “I have the best memories of the D-VAS. Specifically getting to meet people like Betty Bomber….Dolly Parts’Em, Seka Destory…” The astute ToRD fan will recognize those names as current skaters with the Death Track Dolls. Other skaters from those two D-VAS teams have made their way in the derby world as well. ToRD fan favourite Land Shark (another Doll) was a rookie on the team in 2008, Rollergettes founder and skater Goldie Lock ‘N Load was on the original roster, and so was JJ Bladez, who now skates for Hammer City’s Eh! Team.

In 2010, as ToRD went through a period of intense, but stable, growth, the league resurrected the D-VAS as a farm team for ToRD’s draftable skaters, a development role that, in retrospect, has always seemed to be its calling. The program has already successfully graduated skaters into the league, and this weekend, the next generation of ToRD rookies will face off against other fresh meat teams and new leagues in the 2 Fresh 2 Furious tournament hosted by the GTA Rollergirls. 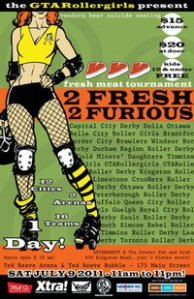 The concept for 2 Fresh 2 Furious actually has roots as far back as 2008 when GTAR’s Derby Debutantes hosted the Virgin Suicides Brawl, a similar tournament for young, inexperienced teams. “I think 2 Fresh 2 Furious is a great opportunity for new players and teams to get their derby feet wet, so to speak,” says My-call Buble long-time bench manager/coach of the Derby Debutantes. “It’s a less intimidating forum for newer players…as their opponents will be of a similar level to them.” D-VAS co-captain Skinned Knee Crosby echoed these sentiments, “The whole tournament is a great, fun idea, and it shows…that roller derby is growing fast and local.”

And right now, flat track roller derby in Ontario may be growing faster than in any other region in North America with leagues forming (seemingly) by the month in locations as varied as Windsor and Minden. Considering the extraordinary growth of the sport in this province, this tournament is now more important than ever. 16 teams will be featured on two tracks in a 20-minute, double-elimination format that will be familiar to anyone who has been to the Beast of the East in Montreal (it should be noted that Buffalo’s Queen City-which has been competing in Canada since 2007-will be sending its fresh meat team as well). This format guarantees that each team will get to play at least two bouts, providing invaluable experience to the participants.

The Chrome Mollys and Royal City have already met this year (May 14). (Photo by Joe Mac)

Things kick off on Saturday morning at 11:00 AM when two very new leagues, the Border City Brawlers (Windsor) and South Simcoe Rebel Rollers face off, while Durham Region Roller Derby will take on one of two teams from Kingston. “We expect strong showings from the WFTDA leagues of Queen City and ToRD,” predicts My-Call Buble, and while this could be case, it’s hard to handicap this event as even some of the more established teams will be sending fresh-faced lineups. The D-VAS, for example, will be using this opportunity to dress ToRD’s latest crop of fresh meat graduates, many of whom have yet to even put on the uniform. The same goes for GTAR’s Chrome Molly’s who will sit some of their more experienced skaters to give the fresh meat a chance to gather the all-important experience.

ToRD's D-VAS have warmed up with a home and home series against Nickel City's Sister Slag. (Photo by Joe Mac)

Despite this mystery, there will, though, be teams to watch. “I looking forward to watching Royal City play; they have some great girls on their team,” says Crosby. My-call Buble also takes note of the quickly emerging Royal City Rollergirls (who will be sending all three of their home teams), “Royal City, Belle City and South Simcoe, although new this year, are playing every chance they get.” Word on the track is that this hard-training South Simcoe Rebel Rollers team may very well be a team on the rise, while Belle City’s Belles of the Brawl (Brantford) just got some valuable experience at CWRDA’s Eastern Championship.  Durham Region has also been busy in 2011. After some struggle to get off the ground, DRRD  seems to have found its footing and has had some impressive showings lately. Any track time is valuable in a young skater’s career, so this activity will be a big advantage for these teams.

But the beauty and excitement of a tournament like this is in the inability to predict things. Any one of the teams participating has a viable shot at winning. For these young teams, it may come down to which roster gels the quickest, which team has the strongest leadership and organization, and, as with any tournament, which teams simply wants it more.

* 2 Fresh 2 Furious kicks off at 11:00 am at Ted Reeve Arena. For a complete schedule visit the gtarollergirls.com. Tickets are available at Way Cool Tattoos and Red Tent Sisters, or online.