Kicking off its sixth season in front of a sold out crowd at The Bunker (the first Toronto Roller Derby league game held in the venue), ToRD’s 2012 regular season rematch between last year’s championship finalists did not disappoint. The Chicks Ahoy! and Gore-Gore Rollergirls looked in mid-season form in an exceptional display of high level flat track roller derby that saw the champs build an early lead and hold on against a resurgent Gores who, of course, refused to give up. Although penalty troubles would end up being the difference, tight, fast packs, slick jamming and excellent on-track communication would highlight this 13 point victory by the defending champion Chicks Ahoy!.

Exposive jamming by Bambi had the Gores jump out to an early lead. (Photo by Kevin Konnyu)

Although it’s been nearly six months since last season ended, both of these teams are stacked with travel team skaters (fourteen members of CN Power alone would play in this bout) who have been skating (and bouting) steadily since the end of last season, so some of the rust you might expect to see in regular season opener was not evident. The opening jam featured an all star lineup with Brim Stone (Gores) and Nasher the Smasher pivoting their team’s top lines. CN Power teammates Dyna Hurtcha (Chicks) and Dust Bunny lined up with the stars. Some nice blocking early (including a big Mega Bouche hit on Brim), had the Chicks jump out to a 5-0 lead. The Gores responded quickly; with 2011 JQ ratings leader Bambi facing off against 2011 rookie of the year Kookie Doe. A fast, tight Gores pack recycled Kookie while Lady Gagya provided some excellent offensive help in springing Bambi for a massive pick up and a 16-5 Gores’ lead. The score would hold up five minutes in with Dust Bunny and Dyna Hurtcha battling to a stalemate despite physical jamming from Dyna (who absorbed blows to fight through packs) and quick juking from Dust Bunny.

Only 24 hours before, Chicks Ahoy! learned that jammer Candy Crossbones was out due to injury, which meant that second-year skater Bala Reina was slotted into the jammer rotation. This worked out well for the Gores who were also looking to develop their own jammer rotation and had third year skater Santa Muerte in place. This provided an intriguing matchup in the early going, and both skaters impressed in the busiest games (jamming) of their careers. In the first part of the half, the Gores had control of the bout, and big hitting from veteran Foxy Sinatra (who tangled with Tara Part early on), great blocking from Chronic (who was calm and controlled on second passes all night), and Aston Martini stepping up to neutralize Mega Bouche had the Gores clearly in the driver’s seat, up 23-7 ten minutes in. But with a lineup peppered with rookies (due to the Candy injury, the Chicks had all three of their rookies dressed—Roadside BombShel, Doris Doomsday and Biggley Smallz), it took some time for the Chicks to settle into this bout. But if any jam could be said to be a turning point, it happened about half way through the first half. 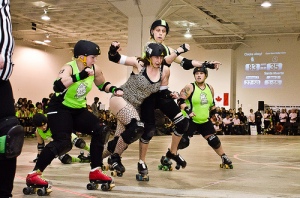 The deep Chicks' packs were the difference early on as the defending champs built a lead. (Photo by Kevin Konnyu)

Down 16 and unable to muster much offense, Tara Part orchestrated a nice first pass that completely caught the Gores off guard, and with both she and Marmighty hammering away on Dust Bunny, Bala Reina was able to score 4 quick points. Two jams later, relentless pressure from Nasher the Smasher earned the Chicks a power jam, ably skated by Kookie who managed 20 points and gave the Chicks their first lead of the bout, 33-28, a lead they increased steadily in the final ten minutes of the half as the Gores slipped into some penalty troubles. With about two minutes remaining, Dyna Hurtcha blew the bout wide open on another power jam. Chicks led 79-32 at the half. 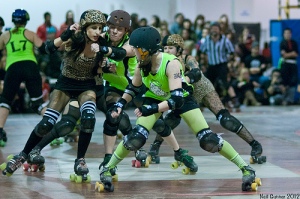 Chicks' rookies Doris Doomsday and Roadside BombShel showed no fear in taking on one of ToRD's greatest jammers. (Photo by Neil Gunner)

The penalty problems continued into the second half, eventually affecting both teams. Santa and Kookie traded jammer penalties early on as both teams struggled to keep control of the bout. While tight walls and well-executed traps had the Chicks seemingly dominating the packs (they looked to be targeting Brim Stone to isolate), they failed to increase their lead, and ten minutes in held the 40 point gap, 95-54. Continuing to trade penalties, the increasingly undisciplined nature of the bout was playing to the Chicks advantage and they did well to limit damage on a Bambi power jam mid way through before she ran into some penalty troubles herself, penalties that allowed the Chicks to continue to maintain the gap. But despite their strong play (including an increasingly improved rookie performance from Roadside BombShel), they couldn’t shake the Gores, and tightened packs (including great pairs work by Molly Boom and Chronic, and then Foxy Sinatra and Brim Stone), and an unrelenting focus kept the Gores within reach. Although down 128-89 with ten minutes left, the crowd in the Bunker buzzed with the awareness of a subtle shift in momentum.

Dust Bunny picked up a quick five points to bring the Gores within reach of the century mark. Then, in a key moment, a controversial call on a direction of game play hit by Mega Bouche led to a gross misconduct and expulsion of the popular blocker and the Gores jumped at the opportunity. Following great blocking from Hurlin Wall (who delivered a key late jammer take out on Dyna Hurtcha), Bambi slipped through to bring the Gores over the century mark. Dust Bunny and Bambi both continued to ring up points, slowly chipping away at the lead until they found themselves within 20 for the first time since the first half with only one jam to go. Dust Bunny and  Kookie Doe lined up for the final jam behind two packs featuring some of the best skaters in ToRD; it started off perfectly for the Gores, with Dust Bunny gaining lead and pulling in a natural grand slam to make it 137-120, but before she could get through on her second pass, Kookie Doe fought through the pack. Continuously recycled, she was unable to score and Dust Bunny managed another 4; but with Kookie set to eventually pick up points of her own, the Gores simply ran out of time, allowing the defending champs to hold on to the lead and win the opening bout of the 2012 season, 137-124.

The 137-124 win was the Chicks' first ever regular season victory over the Gores. (Photo by Kevin Konnyu)

While it was a great victory for Chicks Ahoy!, the Gore-Gore Rollergirls should come away pleased with their performance (they did not look like the overwhelmed team they appeared to be in the Battle for the Boot). Nonetheless, counting an off-season exhibition loss in Tri-City, The Gores have now lost three games in a row for the first time ever. With an excellent core of skaters, the Gores do have the time and opportunity to build from within, which is what they began to do tonight with the likes of Emma Dilemma and Santa Meurte getting key minutes. The Chicks had to be happy to have had the opportunity to play all of their rookies and feature a new jammer in Bala Reina. Despite trailing off a bit at the end of the game, it was a nearly perfect start to the season for the defending champions.

***Next up for ToRD is another double header on March 3rd when the Death Track Dolls and the Smoke City Betties kick off their 2012 season. Make sure to be their early though, as the opening bout will feature CN Power hosting the Roc City Roc Stars from Rochester, New York, in a WFTDA sanctioned match up. Tickets are on sale now!***