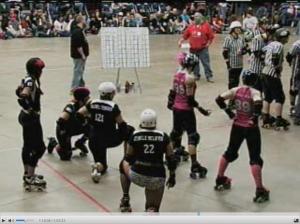 In the ever-tightening North Central Region, Toronto Roller Derby upstarts CN Power (17th) scored an important upset win over 14th ranked Fort Wayne Derby Girls. While the two teams have never met before, Fort Wayne has a long history with Hammer City beginning back in 2007 when the southern Ontario team was invited to the Fall Brawl. While Fort Wayne never lost to Hammer City in their meetings, they faced a far greater challenge on Saturday when they hosted a very hungry CN Power. What resulted was a tense, penalty-filled affair that featured six lead changes and two ejections, but in the end saw CN Power inch one step closer to the WFTDA playoffs.

The bout began slowly, with each team getting a sense of the other as they jockeyed for control. The ToRD skaters seemed to be trying to keep things slow and controlled in the early going, while Fort Wayne looked to up the physical ante and draw CN Power into a physical showdown. What resulted was a defensive stalemate that saw CN Power hold on to a small 7-5 lead, six jams into the bout.  Fort Wayne used their physical advantage to win some of the early scrum starts to get back in the game, and the scrappy, physical packs began to take their toll on the teams and the penalties began to add up.  First Fort Wayne’s Pushycat and CN Power’s Dust Bunny exchanged power jams (and leads), before a 15 point Bambi power jam finally pulled CN Power ahead 38-20.

But as they would all bout, CN Power would build a solid lead only to see the Fort Wayne skaters claw their way back. Momentum began to shift as penalty problems forced Toronto away from its usual rotation and the hosts pounced on the confusion to retake the lead. Despite a strong final-jam push back from a determined CN Power pack (featuring a slick 9 points from an uncharacteristically jukey Dyna Hurtcha), the visitors were down 66-58 at the half.

The second half featured much of the same dueling for momentum and control of the bout that had the teams neck-and-neck through the first ten minutes. In a fascinating sequence around the midway point of the second half, the fate of the game would be decided. First, on another multi-jammer-penalty jam CN Power took a 90-79 lead, then in a turnaround indicative of the game as a whole, the very next jam would see yet another wild swing in momentum as Fort Wayne picked up 15 points on a power jam to inch ahead; with Dust Bunny still in the box, they seemed to have control of the volatile game. But on the back of some strong pack defense, Dust Bunny was able to spring from the pack to steal 9 points; it was a blow that seemed to finally wrestle control of the game away from the hosts. What followed was CN Power’s strongest series of jams of the bout: clean, tight controlled packs led by great individual efforts from Lady Gagya and Nasher the Smasher, and patient conservative jamming from CN Power’s strong three-skater rotation, saw Toronto finally take control of things and pull ahead 134-96 with only eleven minutes left.

But in a game that was full of momentum changes and full penalty boxes, Fort Wayne was down but not out, and they continued to chip away at an increasingly undisciplined CN Power, but while they would outscore CN Power 42-17 in the final ten minutes of the game, they couldn’t climb all the way back, and the ToRD skaters held on for a very important 151-138 upset that could see them climb as high was 14th in the North Central rankings.

**Watch the archived bout here. Next up for CN Power is a home date on March 3rdagainst the Eastern Regions Roc City Roc Stars.

It was a busy weekend in the WFTDA, with eleven sanctioned bouts.

In other North Central matchups this weekend, Cincinnati (8th) and Grand Raggidy (11th) met in a hugely entertaining showdown  that saw Cincinnati fight their way back from a first half deficit to prevent the upset and win 140-116. For Grand Raggidy, a team that has been on the cusp of the North Central playoffs for the past two years, it was an important step in the right direction. And after a big loss to CN Power to close out 2011, 21st ranked Derby City continued their slide, getting crushed by 13th ranked Bleeding Heartland  220-76.

Despite being an apprentice league, Columbia has already knocked off two WFTDA teams this year.

Montreal’s New Skids on the Block (6th) kicked off their 2012 season on Friday in a non-sanctioned bout against Boston (7th); the mixed Boston squad was no match for the Montreal skaters who are hungry after two years of amazing regular seasons have led to disappointing playoff runs and skated away with a 172-83 victory. It was another unsanctioned bout that actually saw the biggest upset of the weekend. WFTDA Apprentice league Columbia Quadsquad All Stars (who began their season with an upset over 16th ranked Dominion) recorded a monstrous upset  in Carolina, stunning the 8th ranked Carolina Rollergirls 99-88. Carolina is also ranked 21st in the DNN Power Rankings, so the East, which seems to produce a stunning playoff-bound upstart every year (Montreal in ’10, London last year), could have their “next-big-thing” in Columbia.

The South Central was busy on Saturday night as well.  In a minor upset, Jacksonville (11th) blew past Gold Coast (9) 186-97 in a game with playoff implications; Unranked Des Moines handled themselves well in a 165-89 loss to 10th ranked Omaha (leaving Omaha clinging to that final playoff spot), while 16th ranked Memphis was able to hold off the Oklahoma Victory Dolls 87-77. Springfield (25th) took down Oklahoma City (27th) 204-76.

There were a few intriguing inter-region matchups this weekend as well. In a stiff test, the South Central’s 4th ranked Atlanta Roller Girls held off the challenge from the Eastern Region’s 10th ranked Maine Roller Derby 181-114. Tri-City Thunder, ranked 16th in the North Central visited Roc City Roc Stars (17th in the East) and proved to be a handful. Only late in the game were the Thunder able to pull away from the Roc Stars, winning. 124-92

Finally, a big congratulations to the Yukon Roller Girls who beat Juneau in a cross-border, northern showdown, 164-161 in what by all accounts was an extraordinary game.  Yukon has a busy schedule lined up for 2012 featuring bouts against Fairbanks, Red Deer and Reign Valley.