In 2012, the Smoke City Betties lost skaters left and right as the season went on as the final core of original skaters slowly moved on. During the season, long-serving Betties Hot Roller and Memphis Kitty called it quits with Sail Her Poon, Rug Burn and General Patten also moving on. The mid-season changes actually seemed to bring the team together and led to the most successful Betties season in years.

In the off season, however, a few more key pieces left the track. Grim Avenger and Lady Scorcher (who had developed into a key member of the pack) both retired, while triple threat BruiseBerry Pie and pivot Mia Culprit were called up to CN Power for 2013. 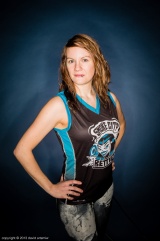 Co captain and jammer Hailey Copter (formerly titmouse) had the best season of her career in 2012. (Photo by David Artemiw

After last year’s early season shifts, what emerged was a tight core that led the team to a second place finish in the regular season and a birth in the semifinals. After an injury-free year finally showed us just what she’s capable of, co captain Hailey Copter (formerly titmouse) will lead the offense (Hailey was second in the league in scoring with 130 points and was the second highest rated jammer on the season), being joined by veteran Wolverina and 2012 breakout jammer Slaptrick Swayze (an impressive 3.47 points per jam in her rookie year).

Co captain and pivot Misery Mae leads a pack that became increasingly tight last season and whose turn around was a key to the team’s success. Triple threat (and CN Power skater) Renny Rumble remains with the team this season (she had the second highest track percentage on the team last year at 52%), anchoring a pack that is built around veterans Tushy Galore (formerly Sin D Drop-Her), Tropic Thunder, Platinum Bomb, Mouth of the South, Genuine Risk and Laya Beaton,

The Betties were also savvy drafters and picked up a whole lot of experience in the offseason. Transfers Tomy Knockers (who already skates for the Bay Street Bruisers) and Udre (who skated for Team Finland at the World Cup) are experienced, multi-faceted skaters who bring a few tools to the team. SewWhat? also followed a winding road to ToRD (including passing through Australia) and Uncivil Servant is a cross-city transfer with significant experience under her belt.

Potential triple threat LowBlowPalooza joins the Betties after a successful stint with the D-VAS. (Photo by David Artemiw)

Joining them are key D-VAS-developed skaters LowBlowPalooza (already emerging as a prototypical ToRD triple threat), and the positionally solid blockers Mazel Tough and  Zom-Boney. Their most inexperienced pick up, Kil’Her at Large, has the pleasure—and relatively stress-free privilege—of developing around a solid core of skaters.

The Betties turned the page last season on a long and at times arduous rebuild that  began after the 2009 run to the championship game and seemed like it would never end. The team has completely remade itself now, rebuilt around a core of skaters who have changed the culture of the team as much as they’ve changed the way they skate on the track. Adding to this newfound stability is transfer coach Wade Wheelson who joins ToRD after coaching in St. John’s with the 709 Derby Girls.

After last year’s brief taste of success, you get the feeling that these Betties are going to be hungry for more in 2013. If all goes well, a chance to Battle for the Boot is definitely not out of the question. 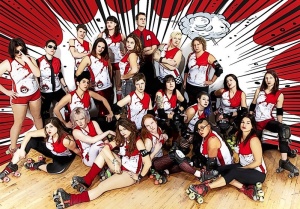 The Dolls look to improve off a disappointing last place finish in 2012. (Photo by Dan Lim)

The Death Track Dolls did not lose a lot in terms of volume in the off season, but they lost some key players. Role players Kat Atomic and long-serving Dolls Lucid Lou and Spee Dee Ramone retired in the off-season, while veteran stars Betty Bomber, Jubilee and Panty Hoser joined CN Power full time.

While the losses for the Dolls are not as significant in terms of the numbers as the other teams in the league, they are certainly significant in terms of veteran on-track leadership as Bomber, Hoser and Jubilee were on the track for more than 50% of the Dolls’ jams last season. But this is a team that has built itself up well with a lot of depth over the pas few seasons, and could be more prepared than any to make the necessary adjustments.

A range of internally developed skaters from a number of generations remain, including long-term veterans like Audrey Hellbornm, Dolly Parts’em, Demolition Dawn and  Monichrome, who have all been with the league from nearly the start. Downright Dirty Dawson, Slam Wow, co captain Speedin Hawking and Sinead O’Clobber represent the second wave of ToRD skaters, while co captain Scarcasm, Ames to Kill, Bellefast, Rhage in a Cage, Santilly In Yo Face, and UpHer Cut are all more recent additions who have quickly become pillars on this team.

The team had moments of brilliance last year, but also underachieved at times as well. With a deep, experienced pack at the core of the Dolls, consistency should follow in 2013.

There are less new skaters on this team than any other, and, interestingly, they are on both ends of the experience spectrum. Transfers Canadian Psycho (co captain of the Bruisers), Getcha Kicks (another rookies Bruisers) and Rainbow Fight (a member of Team Canada at the World Cup) represent three of the most experienced newcomers to ToRD in 2013, while Android W.K., Chicken Sluggets, and Robotomy are as fresh as they come with virtually no track experience and represent the long-term development of the team.

Transfer Rainbow Fight will make her much anticipated ToRD debut this weekend. (Photo by Dan Lim)

Although the team always seems to proclaim “the Year of the Doll,” this year that expression rings more true than any other. With a solid team of returning skaters built around a well-selected core who are all rounding into peak form at the same time, the window for a championship is now wide open. And they seem to have all the pieces in place with an incredibly deep pack and a jammer rotation of Bellefast, Santilly In Yo Face, Rainbow Fight, and Getcha Kicks that will rival any in the league.

After last year’s disappointing inconsistency, the Dolls have all the tools to finally make it to the Battle for the Boot (they are the sole remaining home team not to appear in the championship game), and more importantly, may be hungrier than ever. Adding to the continuity is that Wencer returns to the bench for his second season, joined now by CN Power skater and long-serving Doll Panty Hoser. All in all, it’s an exciting time in the Doll House as for the first time ever, the Dolls are legitimate contenders for The Boot.

** Doors open at the season opening double header at 5:00 PM with the Dolls and Chicks squaring off at 6:00 PM followed by the Gores and Betties. Tickets are available online or at a number of downtown vendors.