On Monday, April 1st, the first ever truly national Canadian Power Ranking will be released on the Derby Nerd. 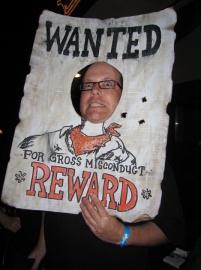 Captain Lou brings years of coaching and announcing experience to the Power Rankings.

For the past two years, Rollergirl.ca, most recently in conjunction with flattrackstats.com, has been doing a fantastic job in providing a consistent numbers-based ranking system for Canadian teams, which has provided an excellent source of comparative information about the burgeoning Canadian roller derby community and has led to some great cross-country discussion. In much the same way that the Derby News Network’s Power Rankings complement flattrackstats.com, the Canadian Power Ranking will be working to complement this great endeavor by adding a slightly more subjective look at things—although through objective lenses, of course.

Power rankings simply add value to the comparative discussion of teams; unlike purely statistical ranking systems, power rankings are a human (some would say opinion)-based system able to take a much wider range of variables into play. Power rankings can account for circumstances beyond the control of numbers, like changes in rosters (through injury, transfer etc.) and winning streaks—things that stats-based systems need time to account for. The best, most reliable power rankings, therefore, require more than one brain to be truly representational.

So, the Nerd is not going about this alone: to ensure broad, regional, unbiased decision making, some of our country’s finest derby nerds will be working together equally on the power rankings.

Captain Lou El Bammo comes to the team armed with an overwhelming amount of knowledge gleaned from days as a coach and bench manager with the Tri-City Roller Girls, where he worked with house league team the Venus Fly Tramps and the WFTDA travel team, the Thunder. Currently he’s on the coaching staff of the Royal City Roller Girls’ travel team, the Brute-Leggers. Along with watching the game from that side of the bench, he’s also been active on the mic, acting as a play-by-play and colour commentator for Rogers TV, Canuck Derby TV, and WFTDA.TV.

Andi Struction brings both a skater and an announcer’s perspective. (Photo by Stephen Giang for SeattleWeekly.com)

The Nerd and Capt. Lou will be joined by a few representatives from western Canada. Dick Pounder was recently appointed Head Announcer for the Roller Derby Association of Canada (RDAC) and has been announcing games in Alberta and for the emerging Calgary Roller Derby Association for years. On top of that, he’s been known to lace up the skates and get out there on the track as well (skating previously for the Glenmore Reservoir Dogs and currently with the Red Deer Dreadnauts), so knows the game from inside and out.

And finally, Vancouver’s Andi Struction also brings that inside/out perspective to the proceedings. A skater with Terminal City Roller Girls since 2006 and currently an assistant captain with the house league team, Faster Pussycats, Andi is also a noted commentator and announcer. A former co-host of the Derby Deeds podcast, she’s been honing her chops on the mic at such major events as the Big O, Flat Track Fever and the RDAC regionals over the past few years

Announcer Dick Pounder has also played the game, so knows the game from the inside as well. (Photo by Steve Recsky)

Captain Lou also sees the Canadian Power Rankings as being an important part of the Canadian roller derby discussion: “Canada is really big and teams are really far apart…which makes it harder for the math to be properly predictive. There just isn’t enough correlative games to make a truly accurate list (based purely on stats),” he says, discussing the importance of this endeavor, and “since we don’t have a proper cross-pollination of games, creating a Power Rankings crew filled with people who have a lot of derby knowledge and are able to sift through disparate datasets to filter out the best of the best is the optimal solution.”

Andi Struction thinks the timing is right and is excited about the future of the sport in this country. ” ‘Canadian’ roller derby didn’t really exist because the east and west teams didn’t really have a chance to play each other,” she said. Dick Pounder agrees that this will be a big year for Canadian derby: “The WFTDA factor should prove to be interesting in Canada this year.”

Andi is also optimistic about the top leagues joining the WFTDA, which would encourage more top-level play. “With Calgary and Kootenay joining the ranks (soon), the eastern teams could potentially do western Canadian tours and hit three WFTDA birds with one stone.”

As alluded to, the Power Rankings Team will be limited by some of the challenges of living in a massive country like Canada with very little cross-region play. Some things to keep in mind about the Canadian Power Rankings:

We’re only a few weeks away from the inaugural ranking on April 1st, but there is a lot going down in those few weeks that will affect that premier ranking: The RDAC Championship is this weekend in Edmonton featuring A-level travel teams from the West, Saskatchewan and the Maritimes, while ToRD’s fourth annual Quad City Chaos (March 23rd, 24th) will feature two of Canada’s top teams, ToRD’s CN Power and the Rideau Valley Vixens, facing off against top level WFTDA competition. Both tournaments will be boutcast on Canuck Derby TV.

It’s going to be an exciting year for Canadian roller derby, all involved in putting together this Canadian Power Ranking are proud to be bringing another angle to the exciting discussion that will take place. Captain Lou also hopes that these rankings will inspire more than just healthy debate: “I’m hoping that new leagues just starting out will be able to look at the Power Rankings list and use it as inspiration to keep going through the hard times (and) I really hope that a Canadian Roller Derby Power Rankings list will inspire more cross-Canada roller derby bouts, so that east will meet west more often than they have in the past.”

Check back in on April 1st for the first Canadian Power Ranking.