The last time the Smoke City Betties defeated the Chicks Ahoy! was in 2009. In roller derby, local and otherwise, change was in the air. Externally, the sport was undergoing a massive shift: from the no-nonsense athleticism of the Oly Rollers to the trapping and isolation game introduced to the larger community by Denver, the game was evolving in exciting and controversial ways that are still playing out. Closer to home, ToRD had just shifted to its new, all-season venue, The Hangar, and an old guard of one of the first flat track teams in the country was making one final all-in push for the ToRD Championship. 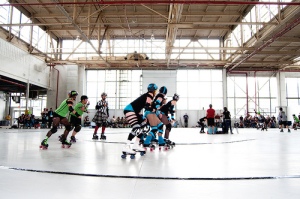 The Betties and Chicks initiate the Bunker in 2009. For the first time since then, the Betties have a shot at defeating the Chicks. (Photo by Kevin Konnyu)

Led by jammers Memphis Kitty and Jewel Kicker, double threat Slaughter Laughter, and pack skaters Hot Roller and Pretty Peeved (not to mention current Death Track Doll Demolition Dawn and an emerging triple-threat in Dyna Hurtcha), the 2009 Betties represented the final throes of a Betties team that had risen out of the ether to form one of the pillars of the Toronto, and Canadian, roller derby communities. That inaugural game at the Hangar would represent the end of an era in terms of the sport; it would be a showcase for how the game had been. Fast, hard hitting, with barely a break in the relentless speed, it was a defensive showdown the likes of which simply can’t exist anymore: skaters are too smart, the strategies too intricate. The game ended up being a 7-point Betties’ victory, the result of a ridiculously low-scoring, 68-61 game. The Betties would make it all the way to The Battle for the Boot that year–their only trip–only to fall to the Gore-Gore Rollergirls, a team that had spawned directly from the Betties when ToRD was formed. 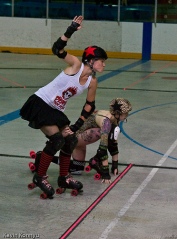 Dolls’ sub (and future Doll) Land Shark lines up against Desmond Deck-Her late in the 2008 Dolls’ victory over the Gores. (Photo by Kevin Konnyu)

To find the last time that that the Death Track Dolls beat the Gore-Gore Rollergirls, you have to look back even further, to 2008, and a controversial bout that will forever be known as the Sub-Game, when an underhanded Dolls team borrowed a few skaters from then home teams the Bay Street Bruisers and the D-VAS (all of the subs would end up becoming Dolls within the next few months when those two homes teams were contracted). Led by one of those subs, Land Shark (who would score 44 points), the Dolls would take down the Gores 112-93 to lock up a share of top spot in the regular season.  Despite that season-closing victory, the Dolls would fall in the semi-final, ending their top season in ToRD to date.

This weekend at The Bunker, the Betties and the Dolls are looking to turn back the clocks to earn victories that feel like a long time coming. And in a season of change in ToRD, the time is now for these two perennial underdogs to overthrow the two teams that have combined to win every ToRD championship. 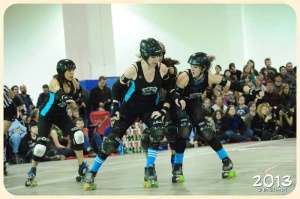 The Betties look to bounce back from disappointing loss, but will do so without injured blocker Tomy Knockers (centre) [with rookie LowBlowPalooza (right) and fourth-year skater Tropic Thunder  bridging]. (Photo by Derek Lang)

Last year when these teams faced off, the Betties looked like they were going to run away with it. Up 22-0 five minutes in, the Betties overwhelmed the Chicks out of the gates, only to have the Chicks completely turn the game around and dominate the rest of the way, winning 182-69. But much has changed between now and then, and with both teams coming off of season-opening losses, each will be gunning for a win. The Betties, who entered the season with high hopes, looked out of sorts in an inconsistent loss to the Gores last month. Led offensively by co-captain Hailey Copter (46 points in the loss) and in the pack by co-captain Misery Mae and rookie-transfer Tomy Knockers, the team showed flashes of great play, out scoring and out playing the Gores for stretches of time in the game. For the Betties, sticking together will be the key as a new core of pack skaters comes together. The Betties packs were loose at times, and controlled by the Gores, and they will need to keep things simple and tight to compete against the Chicks. 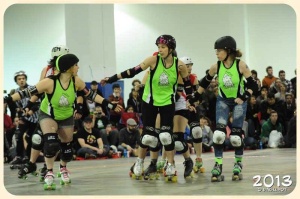 The Chicks have been leaning heavily on veterans like Dyna Hurtcha (lefy), Kookie Doe and Robber Blind while rookies develop. (Photo by Derek Lang)

The Chicks are not familiar with losing (they have won the past two ToRD championships) and will be looking to avenge their season-opening loss to the Dolls. More than any other team, the Chicks roster is full of new and inexperienced skaters, evidenced by the amount of track time swallowed up by veterans Dyna Hurtcha, Biggley Smallz, Robber Blind and Furious Georgia (all on the track for more than 50% of their team’s jams). With the loss of Roadside BombShel for the season, the offense will fall to co-captain Kookie Doe and rookie transfers Rosemary’s Rabies (who struggled at times against the Dolls) and Chevy Chase Her who improved with the increased track time and ended up scoring 64 points and recording a 67% lead percentage in the loss. 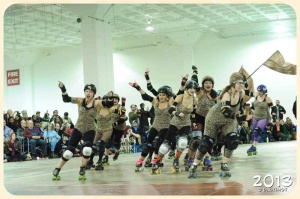 The Gores surprised in their season opener and will be looking to continue a four-year winning streak against the Dolls. (Photo by Derek Lang)

The showdown for top spot against the two teams that have weathered the shifting ToRD rosters this season better than the others. The Gores actually shocked in the opener, pulling a surprising offensive weapon out of their back pocket in veteran blocker Foxy Sinatra  (31 points, 57% lead percentage), which took some of the pressure off of an inexperienced jammer rotation led, in terms of experience, by R.I. Pink. Taranasaurus Rex was solid in limited action, and D-VAS grad Lexi Con made a strong debut, nabbing 47 points and holding down a 79% lead percentage. In the pack, Santa Muerte, Junkie Jenny and Kandy Barr led the way and will need to put in big minutes again against a tough Dolls pack. Word on the track is that veteran skater Chronic may be making her return from a stint on injury reserve, which would boost the experience of the pack. 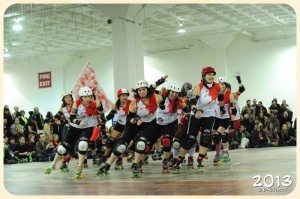 The Dolls look to string together their first winning streak in four years. (Photo by Derek Lang)

The Death Track Dolls also entered the season with high hopes and have thus far lived up to them. The key for the Dolls so far is in its stifling pack work. Given the volume of experience on the team, more than any of the ToRD teams, the Dolls’ track time was incredibly balanced, a testament to their depth and consistency, but also to the experience on the team (they only have three pure rookies on their twenty-skater roster this season). But a key for the less-experienced Gores may be in containing a deep offense. Led by Bellefast and Santilly In Yo’ Face (69 and 66 points), the Dolls round out their rotation with strong and steady Getcha Kicks and emerging triple-threat Rainbow Fight (who managed a remarkable 86% lead percentage in limited action against the Chicks)—a formidable foursome that is currently unmatched in the league.

**This second 2013 ToRD double header goes on Saturday at The Bunker. Doors open at 5:00 PM, with the opening whistle for the Chicks vs. Betties scheduled for 6:00 PM. Tickets are available online or at a number of Toronto retailers.

**Catch up on the standings and stats here.