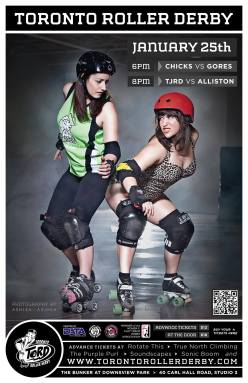 This will be the seventh regular season meeting between these two teams.

Toronto Roller Derby’s greatest feud will be reignited on Saturday night as the Chicks Ahoy! and the Gore-Gore Rollergirls face each other to kick off ToRD’s eighth season. This will be the seventh regular season meeting between the two historic teams, with the Gores dominating those meetings (winning five of six), including a thoroughly dominant 323-75 win in 2013 that amounted to the greatest loss in the Chicks’ history and ended a string of three-straight victories for the Chicks over the Gores dating back to 2011.

The one area where the Chicks have the edge over the Gores is in playoff showdowns. Over five playoff meetings (all in the championship game) the Chicks actually hold a 3-2 edge, including back-to-back wins in 2011/12, the first of which ended the Gores’ twelve-game winning streak (which remains a ToRD record). However, last year marked somewhat of a letdown for the perennial favourites.

When CN Power began to run with a distinct roster after the 2012 season, the Gores and the Chicks were the teams that suffered from roster losses the most, resulting in last year’s “rebuilding” season. The Gores responded much better to the roster shuffle in 2013, finishing second in the regular season standings before being upset by the Smoke City Betties in the semifinal. The Chicks, on the other hand, suffered mightily, finishing last in the regular season standings and being outscored by a remarkable (461 points) 743-282.

Both teams look to return to the form that saw them dominate for much of the early history of the league. 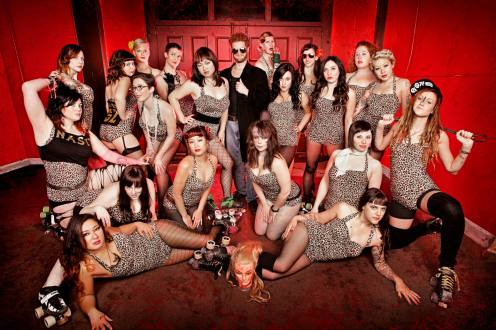 Such has been the incredible success of the Gore-Gore Rollergirls, that last season’s second place finish in the regular season and semifinal loss amounts to a bad year: the worst in the team’s history, actually. After having its offense essentially gutted heading into the season (losing two of the league’s greatest jammers in Bambi and Dust Bunny), not much was expected from the three-time ToRD champs. But the skaters in leopard print had other ideas.

Last year, the team was led by a core of veterans in the pack including Kandy Barr (who skated 53% of the Gores’ regular season jams in 2013), Gamma Rei (53%), and Emma Dilemma (42%) along with Chronic and Santa Muerte who were excellent when on the track, but also struggled with injuries. A strong rookie class was led by rookie track-time leader Purple Pain (47%). All of these skaters return to the track this season. Another vet, Miss Kitty La Peur also suffered through serious injury issues last year and will look to bounce back.

A number of second and third year skaters will also be looked upon to build on strong seasons, including Full Deck, Viktory Lapp and Wheely Nasty, while highly touted 2013 transfer Amefyst, who never made it to the track last season due to injury, will finally debut for the Gores in 2014.

The biggest surprise last season was how successful the Gores were from the jam line. Led by rookie of the year (and the first rookie to register the league’s highest JQ rating) Lexi Con (228 points, 6.0 points per jam, 76% lead percentage), the Gores also got strong jamming from rookie transfer Taranasaurus Rex (157, 4.6, 59%), and veteran R.I. Pink (85, 3.5, 62%). All three will form the core of the offense this season. Beaver Mansbridge emerged as a viable double threat as well, and put up solid numbers despite limited action (57, 5.2, 45%).

The Gores lost a few key pieces in the off season, non bigger than triple threat Foxy Sinatra and long-time blocker/pivot Junkie Jenny (who transferred to the Death Track Dolls). Foxy’s loss affects every aspect of the Gores game, from her punishing pack work to her explosive jamming.

But the Gores did well in an incredibly deep entry draft loaded with experienced transfer skaters. From nearby Royal City, Francesca Fiure is an intelligent skater with a wealth of derby knowledge who could be ready to log serious minutes in the pack. Machu Beatchu was one of the east coast’s biggest prospects when she transferred from Halifax, while Guardian Paingel makes sure the Gores have coast-to-coast representation after transferring from Vancouver’s Terminal City. Blocker, and potential pivot, Moose Knuckles and jammer Lumberjack Flash are both more familiar faces for ToRD fans as they were developed through the D-VAS system and both had strong 2013s.

The future looks bright for the Gores! Expect them to be right back where they normally are: In contention. This roster easily has the potential to get right back to the top. Look for the Gores to return to the Battle for the Boot in 2014. 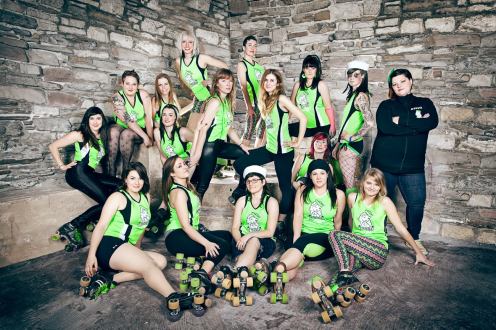 The Chicks Ahoy! are coming off of their roughest season to date, but look to build upon what amounted to a solid rebuilding year. With the smallest amount of roster change in the off season, and the return of a few key players from injury, the Chicks hope to get back in to winning form this season.

The good news for the Chicks is that a majority of the roster returns to pick up where they left off. The three track-time leaders Robber Blind (57% of the Chicks’ jams), Emraged (42%) and Biggley Smallz (42%) are all back and will form a solid core in the pack (Furious Georgia was also in this group and while on the roster, will be on leave this season). Add to that the expected and anticipated return of star blocker Marmighty and veteran leader Hoff, the experience of fourth-year blocker Tess D’Urb-Evil, and the expected improved play of a large number of second and third year skaters who were thrust into unexpectedly prominent roles last season (I’m looking at you Doris Doomsday, Joss Wheelin, R2-Smack-U, Machete Maiden, Heavy Knitter, Mean Streak, and Rosemary’s Rabies) and this looks like a team ready to break out.

Offensively things should be looking up as well. Last year’s jammer core was wracked with injuries but the return of a healthy Chevy Chase-Her and Roadside BombShel will go a long way in securing a consistent offense.

Arguably the most important fresh face is not that fresh a face at all; instead, it’s the recognizable face of Rebel Rock-It. A long time ToRD veteran (she began her career as a Bay Street Bruiser when the Bruisers were still a houseleague team), Rebel returns to the team with which she has had the most success and will be a big impact in the pack (and can jam as well). Sneaky Dee was a breakout star for the D-VAS in 2013 and the incredibly speedy skater could have an immediate impact on a jammer rotation that does lack depth. Speaking of that, Hyena Koffinkat is a transfer from Terminal City where she just completed her rookie season as a jammer. And finally, Wheels of Misfortune is another transfer, from nearby Durham Region, who brings considerable track experience to the Chicks’ pack.

Look for the Chicks to turn things around in 2014 and bounce back from a tough season. In a year where parity could be the dominant storyline, the Chicks provide a dark horse for the narrative and could easily surprise everyone.

***The season opener is this Saturday at The Bunker in Downsview Park. Doors at 5:00 PM, the opening whistle is at 6:00 PM. Stick around afterwards for a very special bout as Toronto Junior Roller Derby hosts Alliston Junior Roller Derby in a junior derby showdown. Tickets are available online or at a number of downtown locations.