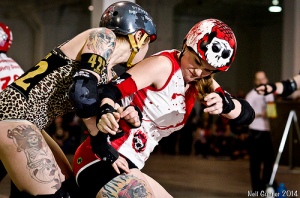 The Dolls’ Audrey Hellborn slows up the Gores’ Beaver Mansbridge. The Dolls looked unaffected by a big off-season shake up. (Photo by Neil Gunner)

You wouldn’t have been blamed if you’d thought this was going to be a rebuilding year for Toronto Roller Derby’s defending champion Death Track Dolls. After winning the Boot in 2013, a number of long-time veterans like Dolly Parts’em and Monichrome retired; in addition, arguably the Dolls’ top three players, Rainbow Fight, Ames to Kill and Scarcasm all got called up to CN Power. On Saturday, armed with a handful of first-year ToRD skaters who have a lot of pre-ToRD experience, the Dolls (1-0) showed that they are fully committed to defending their championship after a surprisingly one-sided 172-79 win over the Gore-Gore Rollergirls (1-1). To further add confusion to ToRD’s standings, Chicks Ahoy! (1-1) picked up its first win in two seasons, ending the team’s longest ever losing streak with a minor upset over last year’s Battle of the Boot runner-up, the Smoke City Betties (0-1), although the 159-179 victory was in doubt until the final moments of the game. 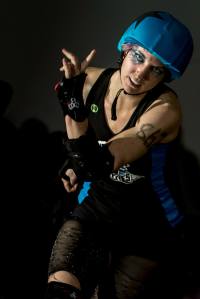 The Betties’ WackedHer was impressive in her long-awaited house league debut. (Photo by Joe Mac)

The Chicks Ahoy! had nearly total control over the game in the first half as the Smoke City Betties tried to shake off some pre-season rust. Rookie dynamo Sneeky Dee kicked things off with a textbook 4 and done, and led by some excellent pack defence, the Chicks pulled ahead 23-0 five minutes in. Overall it took  almost nine minutes for the Betties to score, but when they did, they took off on a 28-4 run over ten minutes to get back in the game. Another debutante, long-time D-VAS WackedHer was huge for the Betties, taking on a big role in a four-jammer rotation that also featured titimouse, SewWhat?, and co-captain WolveRina. Not to be outdone, the Chicks also sport a newly constructed jammer rotation that has looked fantastic in the opening games. Joining Sneeky Dee (whose 25-point power jam midway through the half helped keep the Chicks ahead) were Hyena Koffinkat, Heavy Knitter and the smooth-skating Chevy Chase-Her. A late 19-point power jam for WolveRina (despite some phenomenal defense from Rosemary’s Rabies), in the midst of a big Betties pushback, suddenly had the Betties right back in it, trailing 94-77 at the break.

The heavy-hitting Betties (led in the pack by vets Misery Mae and Tushy Galore among others, but also by strong performances from first and second-year skaters like LowBlowPalooza, Kil’Her At Large, Honey Boom Boom and Babushkill), took over the game for large swathes of the second half. Five minutes in, they were within 10, two minutes later they had cut the gap to five. But the Chicks, sensing that victory was slipping away, were similarly relentless. A Chevy Chase-Her 14 point pick-up had the Chicks back in control, only to see the Betties turn around and orchestrate a 15-pointer for Sew What? (with some punishing defence on Heavy Knitter), and eventually the Betties would take the lead.

The game would see-saw like this for much of the second. The bout marked the return of veteran blocker Marmighty to the Chicks lineup, and some ferocious packwork from her, Rosemary’s Rabies and Rebel Rock-It on titmouse had the score knotted with only a few minutes left on the clock. In the final moments, a forearm call on the Betties’ jammer Sew What? and the subsequent power jam sealed the deal for the Chicks, giving them a 20-point victory, their first of the season. 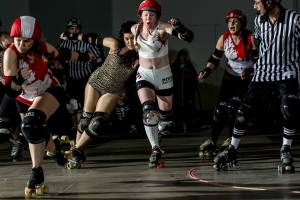 The Dolls’ offense was led by Bellefast (evading a hit from Kandy Barr). (Photo by Joe Mac)

It was a very new-look Death Track Dolls team that took to the track to kick off 2014 against a Gore-Gore Rollergirls team that had looked good in its opener. Riding a tighter jammer rotation of Lexi Con, Lumberjack Flash and Taranasurus Rex got the Gores off to a quick start, but the Dolls, whose pack defence looked strong from the outset, eventually got a new-look offense going. Led by Bellefast—who, while still sporting her trademark speed and agility, seems physically stronger this year—the Dolls relied heavily on first-year Dolls Sleeper Hold and Devochka (whose experience in Durham prepared her well for the night) to jam, while Getcha Kicks, who’d started to block more last season, was also used as jammer to allow her steadying, experienced presence to balance things out.

Looking calm, focused and disciplined against a sometimes frazzled Gores team, the Dolls took the lead about 7 minutes in and never relented. As the Gores struggled with pack penalty troubles, the Dolls cruised to a 36-14 lead seventeen minutes into the first. Both teams’ jammers did well to stay on the track until a botched helmet-cover pass between relief jammer Beaver Mansbridge (who was hobbled by skate trouble) and Gores pivot Santa Muerte gave the Dolls a power jam that they took advantage of.  A second power jam (25 points scored by Getcha Kicks) had the Dolls firmly in control, 111-39 at the half. 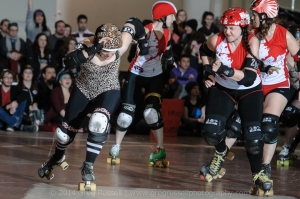 The Gores roared out of the gates in the second half and drew the Dolls into a more scrappy, undisciplined game that allowed them to mount a small comeback. But after both teams cycled through some penalty trouble, not much had changed (the Dolls were up 123-51) when a sniper-like kidney-hit from the Dolls Just Jes sent the Gores’ top jammer Lexi Con to the track and momentarily paused the game. Just Jes was just one of the many Dolls blockers who stepped up to take control of such a new roster of skaters.

Last year, blockers like Canadian Psycho and Dawson had secondary roles, but in 2014, they have been thrust into much more prominent roles on the team and responded well last night, particularly as a trio with the devastating hitter Audrey Hellborn. The return to the track of Just Jes, who worked extremely well on a line also anchored by second-year captain Android W.K., provided the balance that the Dolls needed in light of such changes to the roster.

While the Gores packs are still led by the veterans like Santa Muerte, Chronic and Kandy Barr, it’s not hard to see the future of the team in the play of a new generation of Gores skaters like Full Deck and Matchu Beatchu, who are just two of many newcomers to the team who are building a solid base. Still a work in progress, the Gores have lots of time this year to find the consistency they’ll need to get back to Battling for the Boot.

In the end, the Dolls played a tight, defensive and disciplined game (they gave up no power jams) and were never truly threatened in the second half on the way to the season-opening 93-point victory.