Saturday night’s Montreal vs. Toronto game lived up to the considerable hype surrounding it. (Photography by Neil Gunner)

It may not have been the biggest crowd to ever line the track at the Bunker, but the crowd that took in the final game of the first day of the 2014 Quad City Chaos was arguably the loudest. At least since the venue was home to the first ever women’s World Cup in 2011. And while that says something about the level of derby knowledge the crowd had, it also spoke to the growing importance of the rivalry of the combatants: Toronto and Montreal.

Despite considerable expectations to the contrary, when the weekend’s final game came to its conclusion, things had stayed nearly the same. There were no upsets based on rankings all weekend, and while both Montreal and Toronto gained, Ohio probably will have slipped just a bit and Bleeding Heartland’s tumble down the standings was probably not slowed, all four teams hopefully came out of the fifth annual QCC feeling pretty good about their games.

Returning for the first time since 2011, Montreal’s New Skids on the Block continued where they’d left off, extending their QCC winning streak to nine games after dominant wins over Ohio and Bleeding Heartland and a thrilling 17-point victory against the hosts in the aforementioned Saturday night prime time game. The team’s strongest performance of the weekend was definitely its first, a surprisingly one-sided win (385-158) against the Ohio team that had eliminated the Skids from last year’s playoffs. They also put up the largest single-game scoring total of the weekend (469 points against Bleeding Heartland), but they were susceptible to penalty trouble, allowing the Flatliners to put up a surprising 168 points in the same game.

A lot of questions followed Ohio into this weekend, and they showed they are still a team to be reckoned with, improving with every jam.

After reaching the pinnacle of the sport in 2013, Ohio was reeling from the retirement of two of its most essential players (about which much has been made), but after a slow start against Montreal (they never looked in that game early Saturday morning), they got better all weekend. A tidy performance against Bleeding Heartland was the precursor to the Sunday win over Toronto, a game I’m sure the hosts would love to have back. After being controlled for much of the first half (Ohio was playing great, but seemed a step or two behind a smooth-skating Toronto team and were down 30 at the half), the Ohio All Stars roared back in the second, opening with a 97-14 run that caught a suddenly loose-looking Toronto off guard. It was an excellent half of roller derby for Ohio, their best of the weekend, and a positive sign for the team.

The hosts came in with high expectations and despite going 1-2 for the second year in row, mostly over-performed. A sloppy opening against Bleeding Heartland (the hard-hitting Midwesterners managed to befuddle all the teams at some point in their games) was followed by a half of absolute derby dominance, where they outscored their over-matched opponents 252-6. Emotionally, the greatest success for Toronto came in the highly anticipated matchup against Montreal, a game they briefly led early in the second half (117-113), before a ferocious comeback was slowed by impeccable Montreal defense. And finally, they looked clear in control of their final game against Ohio, before a weak second half allowed the Columbus-based team a chance at redemption. Nonetheless, the 14-point loss to a team ranked 7 spots ahead of them in the WFTDA rankings has to be considered a success. 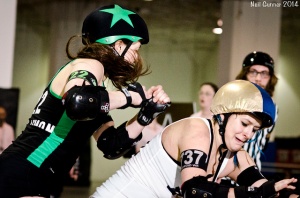 While their big sisters fell to 1-2 on the weekend, for the second consecutive season, the Bay Street Bruisers went 2-0 at the tournament (increasing their 2014 record to 4-1), including a surprisingly dominant 304-94 win against Ohio’s Gang Green in the third meeting between the two teams (they’d split the first two). Sunday’s game between the Sexpos and the Bruisers showed that the increasingly vital rivalry between Toronto and Montreal is not just limited to A-travel teams. The teams had last met in August with the Bruisers coming away with a 61-point victory. However, a handful of skaters from both of those squads have since graduated to A-level play, so it was two very different B-team rosters that took to the track at the QCC.

While the Sexpos had actually gained in experienced players since that August meeting, it was a much younger Bruisers squad that took to the track this weekend. The teams were virtually even, trading leads consistently throughout, it was easy to conclude that the team that made the final error would be the team that would ultimately lose, and it played out that way with the Sexpos getting unfortunate jammer penalties in the closing jams of the game to allow the hosts to hold on for the 27-point win.

Blitz Lemon picked up tournament MVP for the Gang Green; OhiO for the Sexpos; while Android W.K. nabbed the prize for the host Bruisers.

The Usual Suspects (and A-Team MVPs)

Toronto’s Dyna Hurtcha was a triple threat all weekend (here going one on one with Montreal’s Honey Badger).

In a tournament featuring four WFTDA D-1 teams, it’s no surprise that the list of tournament MVPs reads like a veritable all-star lineup. Toronto’s Dyna Hurtcha was a beast all weekend, arguably her team’s best blocker and jammer, she played with a level of intensity that did not wane from opening whistle to closing. Ohio’s Smacktivist would probably have been the tournament MVP, as their value to their team was unmatched. A tireless, phenomenal jammer, Smacktivist was basically off-on against Toronto. Nuck L. Sammie is one of the lone Bleeding Heartland vets remaining from last year’s team, and the speedy, agile jammer led the way all weekend. Finally, Montreal’s Jes Bandit, one of our nation’s finest players, rounds out the A-team MVPs. Her leadership (not to mention her top-notch defense) led the way for the Skids’ consistent performance.

The Steppin’ It Uppers

This is always the hardest to gauge because there are many skaters who could fall into this category. And while Toronto’s Motorhead Molly may have had the game of her life against the Skids on Saturday night, the tenacious and fiery Renny Rumble gets the nod here for her consistent performance in the pack all weekend. For Montreal, it’s equally hard to judge with Chasing Amy emerging as an on-track leader and Honey Badger successfully coming all the way back from injury, but Surgical Strike continues to find new levels of excellence to achieve. Bleeding Heartland is full of skaters who have been forced to step up their play, and this weekend blockers Mauls Dolls (who also fearlessly took the star on occasion) and the powerful Uh Huh Hurricane led the way. And finally, with the retirement of two key skaters, Ohio’s Ava Tarr (who already had a big role on the team) has been pushed into the spotlight, and especially after an incredible performance on Sunday against Toronto, she seems more than ready to be an on-track leader of the team.

From Bleeding Heartland, the recently graduated junior skater Mersadist did not look out of place (emotionally or physically) all weekend and will undoubtedly become an important piece to build around. Montreal’s Miracle Whips, herself a recent graduate from the B-team Sexpos seems to be the team’s emerging top jammer (loaded with talent and potentially, with a just a little more track experience, she could eventually become that team’s premier jammer). Ohio’s Ena Flash (who previously played for the London Rollergirls and Glass City) has immediately been given first-line minutes this weekend for the rebuilding OHRG All Stars, and didn’t shrink under the expectations at all. And for the hosts: Candy Crossbones. You may wonder how a 7-season veteran and travel-team original can be a breakout player. Well, it happens when six years into your jamming career (having slipped a bit on your team’s jammer depth chart), you completely rebuild your game and within a year or so end up becoming an every-other-jam blocker/pivot who can be relied upon in any given situation while playing on a team inching its way into the highest levels of competitive play.

Congratulations to Toronto Roller Derby and all the participating teams for another excellent Quad City Chaos.

**All the games were boutcast in HD by the ToRD.TV crew (and guests). Click here for the full archive.