Gores become first Toronto team to win the Beast of the East at Montreal’s seventh edition of the popular tournament. 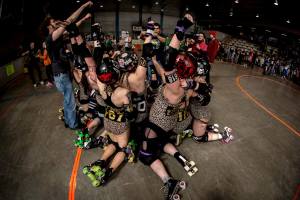 The Gore-Gore Rollergirls moments after the final whistle in the championship game. It was the first Beast win for a ToRD team. (Photography by Joe Mac)

It has become quite a tradition that every spring, roller derby nerds in eastern Canada dutifully fill out their Beast of the East brackets. Some will even work out a few different versions based on hunches, hot teams, or un-hittable skaters.

Every year, without fail, by the end of the tournament, it becomes obvious that filling out this bracket is an exercise in futility.

2014 was no different, indeed it was the most unbracketable Beast in a long line of unbracketable Beasts, a testament to the format—beginning with a sixteen team double elimination round featuring 20 minute games—and the participants—house league teams with little inter-city experience and little data on which to base these matchups. It’s also just one of the myriad reasons why people have fallen in love with Montreal Roller Derby’s annual Beast of the East tournament, and why that affection grows year after year.

Very few prognosticators had picked Toronto’s Gore-Gore Rollergirls to win it all, a team that had failed to live up to high expectations in the past, and fewer still (IE: NOT ONE) saw their opponent in the final, Roller Derby Quebec’s Casse-Gueules, doing anything but providing great warm-up games for the true contenders in the early going. Power house teams were eliminated early (Les Contrabanditas), pre-tournament favourites fell in the quarterfinals (Death Track Dolls) and heart rates went through the roof as game after game after game came down to final jams, or even overtime when final jams just weren’t enough.

Forest City’s Luscious Lunch Ladies provided one of the biggest surprises of the tournament: it took a Riot Squad overtime jam to finally knock them off.

The tournament kicked off with what everyone at the time thought was a pretty major upset, a last-gasp Casse-Gueules win over ToRD’s Smoke City Betties (54-49). It turns out that game was just an omen for what was to come: tight games and unexpected results.

There were a few blowouts, but even those turned heads (La Racaille’s 117-32 against a Riot Squad team that was playing its first games with a newly built roster), but for the most part, the games were close. The Smoke City Betties, Durham Region’s Motor City Madames (to their leagumates the Atom Smashers), Forest City’s Thames Fatales and Guelph’s Killer Queens all went two-and-done; meanwhile, led by ToRD’s Gore-Gore Rollergirls and Death Track Dolls, the surprising Casse-Gueules and Lunch Ladies (neither team having ever won a game in this tournament previously) won their first two games to book a spot directly in the quarterfinals.

The “must-win” elimination games that closed out day one just hinted at the thrilling action that would come. The surprising Atom Smashers (after a head-turning matchup against Les Filles du Roi and a 100-point performance in their second game) stuck around for half the game against La Racaile, before the veteran Montreal skaters pulled away in the end, ending the tournament for one of the “dark horse” picks of the tournament; the Riot Squad finally started to get it together by nearly doubling up FDR, while their two Rideau Valley leaguemates had to square off with the Prime Sinisters (led by their incredible one-two punch of Margaret Choke and Brennan) knocking out the defending champion (but totally rebuilt) Slaughter Daughters. Finally Quebec’s Rouge et Gore played strong late, shocking hosts Les Contrabanditas with a last jam comeback to move on to the quarter finals for the second year in a row.

The first three quarterfinal games provided one of the most exciting runs in Beast of the East history, beginning with the Casse-Gueules overcoming a bad late-game decision (when they called it off early) to hold off a surging Prime Sinisters, 50-46. In the second game, the Luscious Lunch Ladies, led by Team France jammer Pepe Le Punch, mounted a final jam 20-point comeback to force overtime (the first in BOE history), but had little left in the extra jam as the Riot Squad locked down the defense and won by 9. The Death Track Dolls never seemed to get into their game against a hungry La Racaille, and while their talent kept it close for the most part, they fell by 25 (86-61) in the end.

Finally, in an all-Gores matchup, Toronto’s Gores managed to hold on long enough despite a desperate push from the tireless Rouge et Gore out of Quebec (they skated with eight players for much of the tournament and stuck with a two jammer [!!] rotation of Nana Bistouri and Minnie Small for all four games). The Rouge et Gore’s Bistouri made three passes in the final 40 seconds, but Gore’s jammer Beaver made the one scoring pass necessary to book her team’s first spot in the final four since 2011 (64-61).

The semifinals picked up right where the previous round left off. Casse-Gueules showed once again that their performance in the tournament had little to do with luck and a lot to with preparation, and held off a Riot Squad team that visibly got stronger as the weekend went on, while the Rideau Valley team mounted a late-game push, they seemingly mistakenly called the final jam off with no-time left on the game clock (and about 50 seconds left on the jam clock) and down 75-68. The other semifinal was yet another last-jam nail biter, with the Gore-Gore Rollergirls coming back from nearly 20 down in the final two jams (they were down by 32 at one point) to shock the tournament’s most successful team historically, La Racaille, 68-67.

In the six playoff games leading up to the medal matchups, the combined point differential at the end of the regulation time was a paltry 40 points (more than half of that coming from one game). It was an extraordinary show of parity.

The Gore-Gore Rollergirls and the Casse-Gueules provided and intense, back-and-forth final.

The final games (now played with two 20-minute halves) did not disappoint. La Racaille picked up its fifth medal in seven tournaments with a 148-131 win, and they were led by long-time skater K Dawg (who has been a member of La Racaille since the first BOE in 2008) and captain Russion Cruelette in the pack, with Legs//Cite and Falcon Punch leading the way with the star. Riot Squad (being rebuilt around a core of former Slaughter Daughter skaters including Sister Disaster, Hannah Murphy and Amanda Pummeler), really came together as the games went on (as did the other two Rideau Valley teams for that matter).

The final between the upstart Casse and the relentless Gores was also thrilling, tied 71 at half time, the Casse led for much of the game only to see the Gores roar back time and time again. The Casse were led in the pack by Feline Dion, Lady Mariane, and So Viet, with Beat’on The Quads, La Trappeuse and Booty Allen providing the jamming. Gores captain Santa Muerte fouled out 16 minutes into the first half, but instead of collapsing, the Gores thrived under the adversity, getting clutch jamming from a deep rotation (LumberJack Flash, Beaver Mansbridge, R.I. Pink, Guardian Paingel, and Taranasaurus Rex), and phenomenal on-track leadership from veteran Chronic and first-year transfer skater Machu Beatchu. All weekend long, the Gores showed an overwhelming, sometimes frantic, hunger that kept them in tight games late; they saved their most-calm performance of the weekend for late in the championship game, holding on for the 129-114 victory. 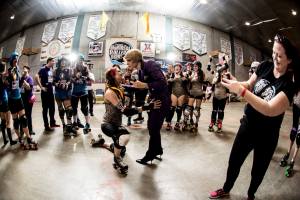 Playing in her first Beast, the Halifax-trained skater turned heads with her wonderful skating and incredibly aggressive blocking. Named Gores MVP as well, Machu is a young player with a bright future. Her play in the pack (not to mention as a capable relief jammer) intensified as the tournament progressed, and she was flat-out dominant in the final game.

A phenomenal jammer, with surprising lower body strength, Beat’on The Quads was the captain of the most impressive (and consistent) team in the tournament. As a jammer, she was tireless, capable of pulling off back-to-backs and holding it together in clutch situations: nursing a slim lead, she actually mistakenly called off what could have been the final jam with time left on the clock in a must-win against the Sinisters, but, unfazed, went right back out, nabbed lead and calmly tapped her hips. It was a defining moment for a team that came of age this weekend. 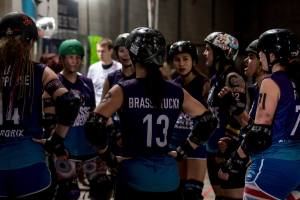 No one outside of Quebec City saw the Casse-Gueules making it all the way to the final; the most surprising team in a tournament of surprises.

What’s left to say about a team that came in so-far under the radar that they were barely mentioned and yet managed to win four games in a row to make it all the way to the final? Last year it was Casse’s leaguemates Rouge et Gore who took home this prize, and this year roller derby fans were once again reminded of the quality organization that is Roller Derby Quebec.

***This year’s Beast of the East was filmed by CUTV, who managed to come in on short notice, with no prior sports or derby experience, and did a fantastic job.