After a summer hiatus, Toronto Roller Derby returns with a semi-final showdown between the Gore-Gore Rollergirls and Chicks Ahoy! A matchup between ToRD’s D-VAS and South Simcoe will kick off the double header at the Bunker. 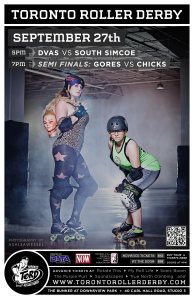 The Gore-Gore Rollergirls (2-1) and Chicks Ahoy! (1-2) share a long playoff history. They competed for back-to-back Boots in ToRD’s first two seasons and met in three-straight finals from 2010-2012. They share the record of three titles, accounting for six of the first seven ToRD championships. But on Saturday at the Bunker, they will write a new, as of yet unprecedented chapter in their significant history: for the first time ever, the Chicks and Gores will face off in the ToRD semi-final.

After reluctantly handing over the reigns of power to their leaguemates the Smoke City Betties and Death Track Dolls (who last year met in the final for the first time), one of either the Chicks or the Gores will have a chance to get back to the top of the ToRD pyramid. Coming into this season, the Chicks took the fall harder than the Gores did, dropping all the way to the bottom of the regular season standings and missing the playoffs for the first time ever in 2013.

2014 has seen both teams surge past the stumbling Betties to get back into the playoffs, but it was the Gores who took out the Chicks in the season opener way back in January with a 218-157 win. The win secured them second place in the regular season standings.

Read the recap of the Gores and Chicks regular season meeting. (Photo by Neil Gunner)

But it’s hard to tell how relevant those early results are as the league took a summer hiatus after its regular season concluded in early June, leaving the home teams dormant while the travel teams put in some time on the road (and returning to the Bunker a few weeks ago as well). As it were, the Gores surged as the season went on, while the Chicks held steady, eking out a win over the Betties in March before getting completely overwhelmed by the Dolls who managed to hold the Chicks to only 35 points—the team’s lowest point total ever.

However, both teams are also built around comparatively inexperienced players who had also been evolving as the season went on, with a handful from each roster playing for the Bay Street Bruisers as well; with that in mind, there is no telling how far they have come and what kind of impact on the game they could have.

The Chicks welcomed virtually a completely rebuilt jammer rotation in 2014. Second-year Chicks Chevy Chase-Her and Heavy Knitter provided as much of a veteran presence as possible, but experienced transfers Hyena Koffinkat and Sneaky Dee led the way in scoring with 71 and 147 points respectively. Actually, Sneaky Dee put together one of the best seasons in the league in 2014. Finishing 4th in scoring (but first in points per jam with 6.4), second in lead percentage (65%), she eventually tied for third overall with a 34 Jammer Quotient (JQ) Rating.

The Gores also welcomed new jammers in transfers Guardian Paingel and Lumberjack Flash. Flash had an immediate impact in the league and in her first year in ToRD finished third in the league in scoring with 153 points (on 3.3 PPJ), tied for third with a 61% lead percentage, and tied for third overall in total JQ. This picked up some of the slack for an injured Lexi Con. Lexi finished atop the JQ standings in 2013 and was well on her way to another dominant season before missing the final game with an injury. Nonetheless she managed 4.89 points per jam and a 56% lead percentage before her injury. Taranosaurus Rex, who joined Lexi and Flash by scoring over 100 points (112), finished with a 49% lead percentage.

Read about the stats and the ToRD standings here.

Both teams rely on more veteran presences in the pack. Marmighty, Hoff and Rebel Rock-It returned to the Chicks roster this season and along with Biggley Smallz, Robber Blind, Emraged, Rosemary’s Rabies and Tess D’Urb Evil have a solid core at the heart of the team. The Gores are similarly experienced in the pack, led by Santa Muerte, Chronic and Kandy Barr, we’ve seen the likes of Emma Dilemma, Full Deck and transfer Machu Beatchu step up into big roles this season. Double threats like Beaver Mansbridge also give the team options on offense.

The Double Header will kick off with a showdown between ToRD’s D-VAS and the South Simcoe Rebel Rollers. The D-VAS are 4-2 on the season, and this represents one of their final opportunities to leave a public impression before the 2015 house league entry draft.

Doors at the Bunker open at 4, with the opening whistle on the D-VAS game scheduled for 5:00 PM. The semi-final is schedule for 7:00 PM. Tickets will be available at the door, but are available online as well.