Alliston, Ontario, was the site of a fantastic night of women’s flat track roller derby where Team Canada continued to tune up as the World Cup nears, the host Misfit Militia picked up a big win, and some of Eastern Canada’s best junior skaters took to the track for an all-star exhibition scrimmage. 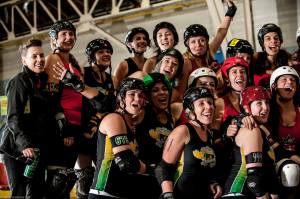 Members of Team Ontario and Team Canada celebrate after their game. (Photography by Joe Mac)

It’s going to be a bittersweet 2014 Blood & Thunder Roller Derby World Cup for fans of Canadian roller derby. The team looks strong in the lead up to what will be the largest global roller derby event in the history of the sport (in any of its various incarnations), and it shoulders expectations to repeat as silver medalists. Yet at the same time, it will represent the final skate for many of our nation’s early stars of the sport, some of whom were featured front and centre on Saturday night at the Alliston Memorial Arena. 2011 World Cup MVP Smack Daddy, her Montreal counterparts Georgia W. Tush and Lil’ Mama, along with Toronto’s (Dusty) Watson, all have announced their intentions to retire after the 2014 season and were key pieces on Saturday as Canada held off Team Ontario 195-99 in a thrilling game of roller derby.

Although Team Ontario regulars Watson and Dyna Hurtcha were maple-leaf clad on Saturday, it was still arguably the best Team Ontario roster we have seen take the track yet, and one that included Team Canada members Murphy, USS DentHerPrize (of the Detroit Derby Girls), and Soul Rekker. This stacked provincial roster caught Canada off guard, overwhelming the national team at the opening whistle with Tri-City’s Ova’Kill taking the first lead of the game behind the support of a terrifying Ontario power line of Murphy, Sofanda Beatin, Margaret Choke and Wylde Leigh Coyote. The opening five minutes were actually dead even with the teams trading power jams and Canada just able to slip ahead 14-10. However, over the next 10 minutes the national team woke up and went on a dominant 10-minute run, outscoring Ontario 56-6 to take a 70-16 lead midway through the opening half. 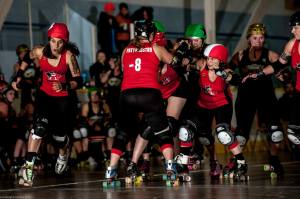 Kim Jana finds an open outside lane for Team Canada. She was part of a deep Canadian rotation. (Photo by Joe Mac)

Ova’Kill was joined on the jam line by Rideau Valley’s Soul Rekker and Toronto’s Motorhead Molly, with Rideau’s Austintatious getting in on the action as well. They faced off against a fearsome Team Canada rotation of Mel-e-Juana (Montreal), Kim Janna (Terminal City—she looked impressive coming back from a serious leg break), Watson (Toronto), and Calgary’s 2014 breakout star Kris Myass, who was virtually unstoppable in carving up the track for Team Canada and seems to be the anchor of the offense as we lead up to the World Cup.

After the flurry by Canada midway through the half, Ontario tightened things up once again. There were some incredible stand-outs in the Ontario pack led by Murphy (who formed great packs with RVRG teammates Bottema and Margaret Choke and Tri-City’s Wylde Leigh Coyote), but also featuring strong performances from across the board, including Sofanda Beatin, hometown skater Renny Rumble, and pivot Sister Disaster.

Stats were tight in the first half with the teams virtually even in leads and power jams (although Canada was much more successful in this regard and also more proficient on the power kill), and the final fifteen minutes of the half were a virtual stalemate with Canada barely outscoring Ontario 31-30 over that span to hold a 111-46 lead at half. 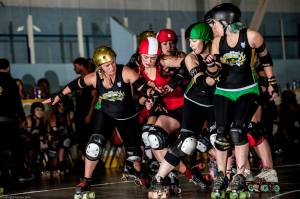 Following the World Cup rules that allow for substitutions from beyond the fourteen on the bench, Team Canada sat veterans Smack Daddy, Tush and Watson for the second half to bring in luludemon and the dynamic triple threat Dyna Hurtcha, who tore up the track at every role in the second half. While former Team Canada stars like Mackenzie, Jess Paternostro and Lil’ Mama remain key pieces, it feels as if there is a passing of the torch going on with Team Canada right now, and the new generation of skaters are stepping up to lead the way. Montreal’s Demanda Lashing and Hughes (Surgical Strike) along with Windy City’s KonichiWow, Terminal City’s Karlene Harvey (Buffy Sainte Fury), and Toronto’s Dyna Hurtcha were the dominant forces in this game and helped to maintain Canada’s lead, 145-61, at the midway point of the second.

Canada had a far greater lead jammer percentage in the second half (about 80% to 20% after being close to even in the first) allowing them to hold back an inspired Team Ontario and record the 195-99 win. 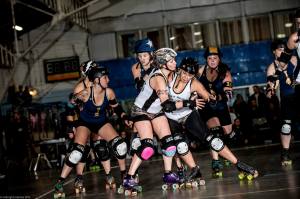 This was the third meeting between the Bruisers and the Misfit Militia in the last three years; they’d split the first two games. (Photo by Joe Mac)

The opening game of the double header featured the hometown Misfit Militia squaring off against their Toronto rivals, the Bay Street Bruisers (ToRD’s B-Travel Team). This was a rubber match of sorts as the teams split two decisions over two years leading up to this meeting. Things started tight with both teams trading early power jams and the Militia pulling ahead 10-9; the Bruisers would roar right back to take an 18-14 lead before the Militia stole the lead back 27-18, all before the 10-minute mark of the first period.

The turning point of the first half occurred near the 20-minute mark when Misfit Militia locked down the defense and jammer Smoka Cola managed four natural grand slams in a 23-point jam that gave the Militia the biggest lead of the game, 59-28, which they would maintain at half, leading 93-40 at that point (Smoka Cola had a remarkable 62 points at the break, while the Bruisers scoring was evenly spread out over its four jammers).

The home team went on an 18-6 run to start the second before the Bruisers began a sustained pushback, but the Toronto team was never quite able to overcome the gap. Remarkably, lead jammer status was nearly even throughout (with the Militia holding only a slight 20-19 advantage) as were power jams, but the stunning defense and stifling penalty kill of the Misfit Militia stole the show and kept the Bruisers at bay. In the end, Smoka Cola recorded a game high 87 points while Bellefast (skating for Toronto in her hometown) led the way for the visitors with 44 points (Sleeper Hold, who had a rough first half, bounced back big time in the second and ended up with 28 points). Although the Bruisers, who finish the season 7-5, slightly improved upon last year’s 90-point loss, with the 174-104 win, the Misfit Militia (7-1) proved once again that they are one of the (if not the) nation’s top non-WFTDA affiliated leagues.

Despite rumblings to the contrary on social media and in roller derby forums, the sport of roller derby has never ever been as healthy as it is today (not even close): more people are playing it in more countries than ever, and more people are watching it and exposed to it than ever before. I was never more aware of this than on Saturday while sitting at an old-school wooden-bleacher iceless hockey arena in a rural Ontario town that itself has two distinct roller derby leagues, where our national team was facing off against one of its provincial counterparts, all under the awe-filled gaze of a group of junior-aged players who were in town to try out for their own national team.

Just fourteen years ago—less than two decades!!—not only would no one have believed this possible, no one would have even thought to consider it.

Next stop on the road may be Nashville for the WFTDA Championship, but just over the horizon, Dallas looms.

*** Check out layer9.ca for trackside video coverage, and local viewers check local listings for Rogers TV rebroadcasts of the game.