Smoke City Betties jammer WackedHer attempts to power through a Death Track Dolls wall in the ToRD semifinal at The Bunker in Dowsnview Park on Saturday night. (Photo by Neil Gunner)

At the midway point of the opening half, it was still anyone’s game.

From the opening whistle, the Smoke City Betties had managed to keep one step ahead of the defending champion Death Track Dolls, but with a scoreline that read 66-40, they hadn’t been able to distance themselves. It was still anyone’s game.

And then, suddenly, it wasn’t: A methodical fourteen-minute, 50-0 run (in which they managed to nab eight out of nine lead jammers) extended the Bettie’s lead to 76 points. The Dolls would never get closer again, and after a second-place regular season and two-straight ToRD championships, they fell short in their attempt to make it three in a row in the 200-123 loss.

On Saturday night the Betties (who finished third in the regular season) delivered a complete game effort from a determined, focused and unified team that seems to have saved its best efforts for the most important time of the season, and after dominant quarterfinal and semifinal wins looks poised to challenge the three-time champion Gore-Gore Rollergirls in Toronto Roller Derby’s ninth Battle for the Boot.

The Betties played such a complete game that it is actually difficult to pull out standout performances. Part of the key to the success that the team has displayed in this year’s playoff run seems to be that everyone is buying into her role on the track. In a post-game interview, blocker/pivot SewWhat? attributed this partially to an off-season turnover in leadership that required everyone to step up and take responsibility—something that the team obviously did not shy away from. And from emerging leaders like SewWhat?, Honey Boom Boom and LowblowPalooza, to first-year transfers like Anne Bulance and Brickhouse Bardot, to the veteran core of Tushy Galore and titmouse, the Betties have built the depth to compete against anyone in the league.

As they have all season, the Betties used a deep, consistent jammer rotation led by the unflappable duo of WhackedHer (43 points and an 83% lead percentage at half, that translated to 51, 73% for the game) and Wolverina (who was the game’s leading scorer with 69 on a 77%) to terrorize the Death Track Dolls, who didn’t have the defensive depth to match the consistent turnover of diverse jammers. Overall the Betties had a 65% lead percentage at halftime (and an even more impressive 73% over the second half of the opening period, ) accounting in large part for the considerable 118-54 lead at the break.

Playing desperation derby, the Dolls actually had a better second half (eventually outscored 82-69 in the period) that was a little deceiving as their most sustained push (a 30-7 run) came over the last five minutes when the Betties had taken their skates off the gas and the game was out of reach. 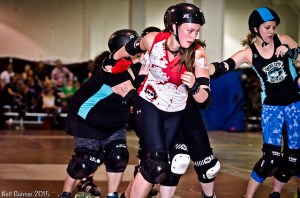 The Dolls got a monumental effort from Sleeper Hold, who donned the star for a remarkable 22 jams on the night. (Photo by Neil Gunner)

Part of the change could be attributed to a momentous effort from second-year jammer Sleeper Hold who appeared in twelve jams in the second half alone (and finished the game with 66 points and a 41% lead percentage on 22 jams). The lack of depth in the position was the result of the bad luck that seemed to follow the Dolls this season. With rookie of the year candidate PrEditor unavailable for the remainder of the season (along with Scarcasm being unavailable for this game) and Devochka having just returned from injury (she got stronger as the game went on, and was excellent as pivot—receiving some key passes and managing 15 points on 60% in limited action with the star), the Dolls were left with Sleeper, rookie Common Dominator (who only had 18 jams worth of experience under her belt coming into the game), and D-VAS call up Battering Ma’am (who didn’t look out of place at all, recording 20 on 42%) to try to match the Betties offensive depth. The Betties rotation was rounded out by CN Power jammer Smoka Kola (54, 69%) and six-year veteran titmouse, whose numbers seem to pale compared to her counterparts (18, 27%). But upon closer inspection, the crafty veteran found ways to deliver and had the Nerd’s “stat of the night”: an incredible 7 stolen points, including 4 in the second half.

Similarly, the Dolls’ pack was lacking some key pieces as well, as both Dawson and Bloc Quebecois were not yet ready to return (Slam Wow and Junkie Jenny were already gone for the season). Another D-VAS call up (and former Doll) Lucid Lou was excellent given the circumstances, and Robotomy, Getcha Kicks, Hannibelle and Stringer Belle continue to provide a consistent core to the pack, but it simply wasn’t enough against a Betties team that was firing on all cylinders.

In the end, the 77-point victory allows the Betties to return to battle for the boot for the third time in history. The showdown with the Gores marks a rematch of the 2009 Battle for the Boot, and is the first appearance for the Betties since a 2013 loss to the Dolls.

* The game was broadcast on Rogers TV. Stay tuned for rebroadcasts. Also, the thrilling preliminary game between the D-VAS and Royal City’s Our Ladies of Pain was also broadcast. Definitely find the time to tune in to this thrilling game. (You can also watch track-side footage of both games on layer9.ca)

These two teams will be meeting again in Guelph on June 13th. If this game was any indication, it might be a road trip worth making for Toronto fans!

*Battle for the Boot 9 is on June 6th at the Bunker. Tickets are on sale now.