Although lacking in the size and scope of its senior counterparts, the inaugural Junior Roller Derby World Cup, set to go in Kent, Washington, over the next two days, could in the long run prove to the be the most important of the global roller derby events. Only four years removed from the first Blood & Thunder Roller Derby World Cup, it’s remarkable that this event is happening at all.

In the end, only three nations were able to track teams for the event, which was intelligently scheduled to coincide with the 2015 Junior Roller Derby Association Championships, but they represent three of the Big Four roller derby nations: USA, Canada, and Australia. USA itself will be split into East and West squads, rounding out a four-team tournament. On Wednesday, July 8th, the teams will play a six-game round robin (consisting of 30-minute games) to establish seeding. On Thursday, the seeded teams will then play a double-elimination tournament to determine the first junior world champion. Day 2 of the event will be live-streamed beginning at 9:00 AM Pacific (12:00 PM Eastern).

Canada opens the tournament facing off against USA East. While the two American squads remain, arguably, overwhelming favourites (as the united team did at the first senior World Cup), the fact that they are split and that junior roller derby has been longer established in Canada than in Australia actually gives Canada a shot (Australia’s roster has representatives from seven leagues, while Canada has representatives from fourteen), yet, in reality, the tournament is up in the air. 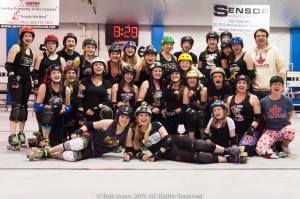 Thirty skaters were named to Team Canada’s practice roster, with twenty selected for the World Cup itself. While the majority of Canada’s skaters are products of Edmonton’s long-established Greater Edmonton Junior Roller Derby and its travel team, Wild Rose All Stars (nine of the full thirty), there are representatives from (nearly) clear across the nation: from Montreal to Alliston to Saskatoon to Powell River and Nanaimo, British Columbia (and pretty much everywhere in between) with Toronto, Vancouver and Montreal all adding three skaters each (four from Montreal if you count one junior graduate).

While the Edmonton core will undoubtedly lead the way, the final twenty skaters have two intriguing players to watch: Rideau Valley’s Jamie’s Got a Gun is actually a junior graduate who now plays in WFTDA Division 1 for the Rideau Valley Vixens; capable of playing all three positions on the track, Jamie could be huge for Canada. Another skater to watch is dynamic jammer,  Montreal’s El Skeletto. Already a four-year roller derby veteran at this early age, he is one of only two boys on the Canadian roster at this co-ed event.

Co-ed and inclusive, this first ever Junior Roller Derby World Cup will offer a glimpse into what the future of the sport has to offer. We got a sense of the level of play to expect at last year’s Blood & Thunder Roller Derby World Cup during the JRDA All-Star game featuring skaters from both Canada and USA’s rosters. It was a phenomenal display of talent, and if at it was at all a preview of this week’s tournament, then we’re in store for something special, and if you haven’t watched junior derby at this level, then some surprises as well.

**This article has been updated. The original said that only one boy was on the team, when there are actually two: El Skeletto and Marty McDie.