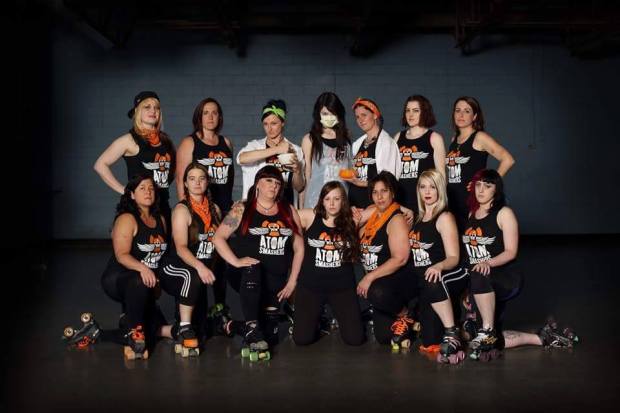 In the annual all-Durham Region showdown, the Atom Smashers won their fourth consecutive Gibson’s Cup over the Motor City Madames on Saturday night in recording-setting fashion, managing to set records for most points, fewest points against and largest margin of victory in the 312-75 win. Despite the lopsided nature of the score, it was a celebratory and entertaining evening featuring the best crowd of the season with Rogers TV on board for a full broadcast.

The Gibson’s Cup is named for a young fan who passed away in 2010 after an extended battle with cancer. Once again, Hearth Place was the charity partner for the event. (Photo by Joe Mac)

After forming in 2010, Durham Region Roller Derby put together its first full season in 2011, concluding with the inaugural Gibson’s Cup. That first season, the Smashers and the Madames were virtually even, with the Madames taking that initial showdown 145-114. It would mark the last time the Madames would notch a victory over their leaguemates.

The Smashers eventual dominance was not born overnight, but took time. In 2012, they won the event 257-152, and then in 2013, the Madames managed to make up some of the gap, losing by only 66 points; however, last year the gap widened, and this year the difference on the track was immense.

In a two-team house, league it’s truly impossible to find a single event or reason for a growing gap between teams, but differences in drafting, inconsistent retention rates, and simply individual skill are all factors that play into it. Also, nearly from the start, DRRD’s travel team, the Devils (on hiatus in 2015), was comprised of a majority number of Smashers. No doubt, the advanced training and competitive schedule also played into the growing chasm between the clubs.

The Madames entered the 2015 Gibson’s Cup on the heels of an up-and-down season. A final four appearance at Wellington Roller Derby’s Winter Wipeout (where they were eliminated by the Smashers) was followed by a one-sided loss to Royal City’s talented Killer Queens. This loss preceded a two-game winning streak over Lindsay and Niagara that brought the team into the Cup on a high note.

The Smashers are coming off of, arguably, their best season ever (they went undefeated in 2013, but given the nature of the competition and the amount of games, 2015 may still be better overall). They dominated the aforementioned Winter Wipeout tournament, taking home the trophy after defeating Orangeville in the final, and then made their second consecutive appearance at the Beast of the East, where they lost to Rideau Valley’s defending champion Prime Sinisters and then a heart-breaking one-point elimination game against Toronto’s Chicks Ahoy!. But the team followed that event with three straight wins (including handily taking the rematch with the Chicks) before a very narrow 136-122 loss to Wellington’s Feims ended the run.

Led by its longest serving core members Mozilla, Karma Screwya and Reject Barbie, the Madames entered the Cup with a 12-skater short bench, and the team got caught on its back wheels at the opening whistle, as the Smashers roared out to a 43-0 lead that extended to 84-10 only eight jams in; at the midway point of the opening period, a 37-point jam by Betty Fugetaboutit extended that already impressive lead to 125-19, essentially putting the game out of reach.

There wasn’t any one aspect of the game that Madames seemed lacking in when put up next to their counterparts, and the team has managed to build up a solid, albeit short handed, roster. Daisy TripHer, Astro Girl and Roller Mitch form a developing jammer rotation with a ton of potential, while the core blockers have built up a solid-multi-generational group around them, led by the excellent Pac-Ma’am.

But the Smashers have somehow managed to remain one skate ahead and keep building off of the already solid base. As a team, the Smashers are built a little differently, eschewing a set jammer rotation and instead passing around the star to a group of double threats, led by Piptonium and Fugetaboutit. This season, they’ve added Iggy PopHer, Code Blue, and Birdie, all similar, multi-position players who played big roles in this year’s Gibson Cup win: Not that they don’t have designated blockers (Amefyst, Psycho Magnet) and jammers (Scarlita), but they are a team with options.

With a commanding 187-39 lead at the break, the second half was all about managing the game. The Smashers used the big lead as an opportunity to give the star to some designated blockers including Natitude, Psycho Magnet and long-time veteran Goldie Lock N Load.

Word on the track is that there have been some discussions around DRRD about a possibly restructuring of the current league model, so the future of the Gibson’s Cup—at least in this form—remains in doubt. If so, this was a great sending off: celebratory, hard fought, and fun. On the track, the league remains healthy with a thriving farm team in the DRRD’y Farmers and a whole crop of 2015 rookies that seems destined to lead the league into the future.