ToRD’s 10th season kicked off with a rematch of last year’s championship game between the Smoke City Betties and the Gore-Gore Rollergirls. (Photo by Neil Gunner)

It was a packed house at the Bunker to kick off Toronto Roller Derby’s historic 10th season, and the fans in attendance (a number that included wide representation from nearby roller derby leagues) were treated to two solid games of flat track roller derby that showed a level of four-team parity not seen in ToRD for quite some time (both games had differentials under 30 points). Coming into the season, one of the worries was what kind of talent gaps may exist due to a large off-season turnover; however, a mix of talented transfers and emerging stars showed that the league is continuing to build depth.

That was just one of many stories told on this night that also included a potential change in power as 2015’s last-place team, the Chicks Ahoy!, seems to have completed a multi-year rebuild and looks ready for contention. On an individual note, Gore-Gore Rollergirls’ fourth-year jammer Lexi Con became just the fourth skater in league history to reach the 500-point plateau in the Gores’ victory over the defending champion Smoke City Betties. 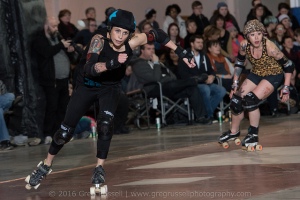 ToRD’s 10th kicked off with a rematch of last year’s Battle for the Boot, only this time the tables were turned as the Gores meted out some revenge with the 19-point victory over the team that defeated them in the championship game.

The Betties got off to a great start with Kingston transfer Caume-A-Kazi putting up 9 points with some help from internal (Chicks) transfer Emmy Kilmister (AKA: Morton). The lead was short-lived, however, as a Beaver Mansbridge 8-pointer followed by a Lexi Con 14-point jam gave the Gores a lead that would be threatened throughout but never lost. After such an explosive start, it seemed that Lexi Con would reach her milestone quickly, but she faced some tough Betties defence on her next few jams, stuck on 498, before finally breaking through and picking up the two she needed.

The core of the Gores pack remains relatively unchanged, led by veterans Jill Em All and Chronic and bolstered by strong performances from Stabbey Road and Viktory Lapp (among others), the most notable newcomer in the season opener was hard-hitting South Simcoe transfer Suzy Scalp-Her. This consistency in the pack allowed the Gores to get off to a strong start, pulling ahead 52-36 with ten minutes remaining in the half.

A penalty to Gores’ jammer Murdercat! gave the Betties a late power jam that they took advantage of with Kazi picking up 15 points to pull the Betties within 4, down 63-59 with four minutes left in the half. Kazi’s strong performance and apparently seamless transition to the Betties rotation is a huge boost for the defending champs who lost virtually their whole jammer rotation in the off season and aside from the Kingston transfer, were forced to look internally to fill the gaps. Long-time Bettie Genuine Risk played her first career game with the star and Honey Boom Boom was called into action as well, though her absence in the pack was noticed. Noodle Kaboodle, the lone jammer drafted by the Betties, looked comfortable on the track as well and will undoubtedly be a key component to the team as the season progresses. 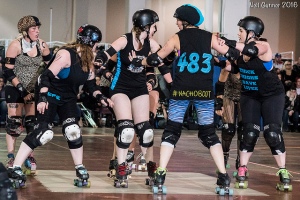 But it was Gores jammer Beaver Mansbridge who turned it on in the final moments of the half, completing a fantastic thirty minutes with the star to help the Gores rebuild their lead, up 83-59 at the half.

One of those former Betties jammers, WackedHer, was strong in her leopard-print debut and completes a strong rotation for the Gores that was clearly the difference in this one. And that’s because the Betties pack looks to be as strong—with a potentially higher ceiling—than even the pack that led the team to the Boot last year. Terminal City transfer Booty Quake was outstanding adding to a deep back that includes the aforementioned Emmy, and co-captains AnnBulance and LowblowPalooza (whose instinct for offense is exceptional).

Veteran transfer Boxcar (with the star in her hand) looks to get past a Dolls’ blocking trio.  (Photo by Neil Gunner)

The second game of the evening was every bit as entertaining (not to mention close) as the first. Although it didn’t seem as if it was going to be that way by the end of first half as the Chicks pulled away significantly (up by 55 points) at the break. But a determined Dolls team that got stronger as the game went on chipped away but couldn’t get closer than the 25-point deficit in the second half.

In the three seasons since the Chicks’ last Boot victory in 2012, they have finished last twice and second last once in the regular season standings, but after opening night of the 2016 season, the team finds itself back atop the ToRD standings.

The game started off tight, with Thunder Bay transfer (and long-time roller derby vet) Boxcar making her ToRD debut and taking the first jam with the star against another veteran Getcha Kicks (who was making her return to the regular jammer rotation in place of the injured rookie Holly Rocket). An early power jam allowed the Chicks to take a 10-6 lead, but the Dolls would respond immediately and took the lead after a Kicks 10-point pick up gave them a 16-12 advantage. The lead would be short lived, however, as the Chicks retook the lead 22-20 moments later. The score would remain tight after the teams traded a few scoring passes. It wasn’t until the midway point of the half that the Chicks (on the strength of a power jam) would begin to pull away taking an, at that time, game-high 15-point lead.

The Dolls’ Will Wrecker, Dawson, and Babushkill look to force Monster Muffin out of bounds. (Photo by Greg Russell)

The Dolls’ former jammer and ToRD’s 2015 leading scorer Sleeper Hold transferred to the Chicks in the off season, but also transferred to the pack and was dominant with the pivot stripe all night. Instead, the offense was paced by Boxcar, second-year Chick Monster Muffin and rookie Banshee. The Chicks actually have a deep, multi-talented bench that also includes double threats R2 Smack U and Wheels of Misfortune. Along with Getcha Kicks, the Dolls saw Devochka return with the star and welcomed long-serving D-VAS skater Bat Ma’am to the fold (Ma’am actually made her Dolls’ debut last season as an injury call up). But it was the Chicks’ offense that was firing on all cylinders to close out the half, building up that commanding 88-33 lead, while the team’s defense held the Dolls off the board for the final 12 minutes of the first.

However, the story of this game was not the offense, but the defense. Both packs looked much tighter than those in the opening game, with each team employing strong VRDL-style cube defenses that led to some long, grinding jams. The Dolls pack remains similar to last year’s with one side of the pack being led by Tri-City transfer Commander Will Wrecker, 8-year Doll Dawson and co-captain Robotomy, and the other anchored by co-captain Dasilva (formerly Hannibelle), veteran Betty Bomber (who returns to the track after a one-year hiatus) and Block Quebecois, who looked like she hadn’t missed a step after being out with injury for nearly a year. The strong Dolls “D” allowed them to slowly, but consistently chip away at the Chicks’ lead. They were down 111-67 at the midway point of the second half, but seemed to slowly be taking back the momentum.

But the Chicks are led by a core of experienced blockers in the pack who ensured that the game never got that far from them. Along with Sleeper Hold, Biggley Smallz, co-captain Joss Wheelin and Rosemary’s Rabies were key in maintaining the Chicks’ lead, and big, timely hits from Vag Lightning and noticeably improved play from Slamureye kept the team in the game.

Overall, it was evident that the Dolls were getting stronger as the game went on, outscoring the Chicks 42-23 over the final 15 minutes (and 76-46 overall in the second half), but the hole was too deep to dig out of and the Chicks were able to skate away with the 25-point win.

*For some track side film of the game check out layer9.ca. Next regular season double header is on February 6th with the Dolls facing the Gores and the Chicks squaring off against the Betties.