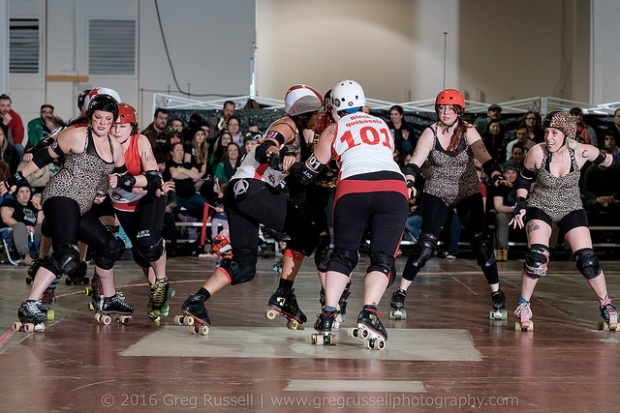 The Dolls and Gores kicked off ToRD’s second double header of the season. (Photo by Greg Russell)

Chicks Ahoy! and the Gore-Gore Rollergirls both pulled to 2-0 on the season to sit atop the Toronto Roller Derby standings and set up a season-closing showdown that will determine the top seed heading into the March quarterfinals. It’s the first 2-0 start to the year for the Chicks since their undefeated championship season in 2012. Meanwhile, the Smoke City Betties and the Death Track Dolls—the teams that account for ToRD’s last three championships—are battling for the basement right now, but will play each other to close out the regular season guaranteeing that one of them will notch a victory before the year is done.

The Dolls, who had a strong second half in defeat against the Chicks two weeks ago, picked up where they left off and got off to a strong start against a Gores team that looked scattered from the opening whistle. Tight defense and timely offense saw the Dolls take a quick 12-0 lead before the first power jam went in their favour. Rookie jammer Ellen Rage managed 5 against a scrambling Gores pack; a subsequent 4-point pick up gave the Dolls a substantial 21-0 lead five minutes in to the opener. It was a strong start characterized by tight Dolls packs and simple offense lead early on by Dasilva.

Only moments before game time, the team discovered that they would be without leading scorer Devochka (43 points in the season opener) and looked to first-year Dolls Rage, Bat Ma’am and Holly Rocket (who nabbed her first lead and first points during that five minute opening run) to pick up some of the slack and support Getcha Kicks (who also had 43 points in the opener).

The poor start by the Gores was due in large part to a number of pack penalties leaving them short handed. The bench took an early time out to calm jitters and it paid immediate dividends. Jammer Beaver Mansbridge, who had a 79% lead percentage in the season opener, began what would end up being a big night directly after the time out, putting up 24 points against a suddenly scrambling Dolls. The teams would trade leads over the next few jams with the Gores inching ahead 42-36 with thirteen minutes remaining in the half.

Moose Knuckles began a strong game with some nice offense and ratcheted up the defense with a big hit on Ellen Rage on a key jam that saw the Gores pull ahead 55-40 to take their biggest lead of the game. The lead extended to 20 shortly thereafter and a late power jam could have made it worse if not for some strong defense from Will Wrecker and Dawson to limit the damage. Nonetheless, the Gores took an 80-60 lead into the break.

The Gores became a completely different team after that shaky opening five minutes and made sure that they did not start the second half as they did they first. They earned an early power jam when veteran Jill ‘Em All drew a cut on an unsuspecting Ellen Rage who was left puzzled on her way to the box. The advantage allowed the Gores to take a 27-point lead (97-70) five minutes in, the biggest of the game at that point.

The Gores got another strong performance from Beaver Mansbridge. (Photo by Greg Russell)

Although the pack tightened up, the Gores offense is coming to life as well. Lexi Con had another solid game after a strong season opener (where she scored 48 points on a 71% lead percentage) and the agile and speedy Murdercat! is rounding into form and is looking increasingly strong dancing the lines. In the pack, Viktory Lapp picked up where she left off in the season opener with another strong performance, and was a big part of a 15-point jam midway through the half that helped increase their lead to 133-99.

Despite some excellent moments, the Dolls never seemed to come together in the second half and didn’t threaten the Gores’ lead. The packs looked loose on defense at times and weren’t always timing transitions well. However, the game provided a great opportunity for their new jammer rotation to get some big minutes, which should pay off later in the season.

The 45-point difference at the end of the game represented the largest lead of the game as the Gores closed things out comfortably. 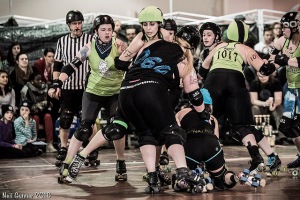 The game got off to a tight start with both packs locking down the defense. (Photo by Neil Gunner)

The second game of the night got off to a fantastic start with both packs playing excellent defense to hold pack the league’s two leading scorers, Betties’ Caume A Kazi (63 points in the season opener) and Chicks’ Monster Muffin (53 points). Mia Culprit, titmouse, Brickhouse Bardot and Jenny Spector held off the jukey Muffin, while Rosemary’s Rabies, Biggley Smallz, Joss Wheelin and Boxcar worked Kazi, eventually drawing a cut. The packs never advanced beyond Turn 3 in this two-minute opener as the Chicks got out to a quick 9-0 start.

The defending champion Betties have been forced to rebuild their jammer rotation this season and have been looking within to fill the gaps. Honey Boom Boom had the star the first game, and in this one Jammerhead Shark got a shot. Boom was immediately noticeable in pack, playing on a strong line wit Emmy Kilmister, LowblowPalooza and AnneBulance.

Two former D-VAS teammates were the story offensively, however, with Chicks’ Banshee continuing a strong start to her ToRD house league career (she had 5.2 points per jam and an 80% lead percentage after the season opener—both league leads) and the Betties’ Noodle Kaboodle had a breakout game highlighted by a game-long battle with Chicks’ blocker Biggley Smallz, who, working with Vag Lightning, got the early advantage locking her up and knocking her down early on.

Last year’s league leading scorer Sleeper Hold spent the first game in the pack, but donned the star in this one (swapping with Boxcar) and helped the Chicks get out to an early lead that had built up to 69-39 with 10 to go in the opening frame. A Noodle Kaboodle 14-point pick up brought the Betties right back in it, pulling within 10. However, with Genuine Risk wrapped up by a Chicks pack lead by Biggley, Joss Wheelin and Gorsasch and Monster Muffin able to navigate the defense on her own, the Chicks laid down an 18-0 jam to extend the lead to a game high 101-73, that would hold up at 102-77 at the break. 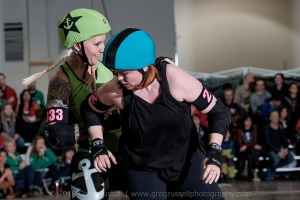 10-year vet Mia Culprit, who returned to houseleague play for the Betties in this one, holds up Monster Muffin. (Photo by Greg Russell)

The Betties tried to mix things up in the second giving Boom the star and evening jamming vet titmouse, but the team could not sustain an offensive push. An 18-pooint jam (that included a power jam) by Sleeper pulled the Chicks ahead 156-91 nearing the midway point of the second half.

Although without an injured Booty Quake, the Betties’ packs definitely had strong moments. The excellent play of the returning Mia Culprit and a solid performance from the team’s other Kingston transfer Red Delicious (who transferred with Kazi) gave the team something to look forward to as they try to work out the offense.

Noodle Kaboodle and Biggley Smallz continued their battle late into the game, but the increasingly excellent play from the Betties’ rookie was not enough as the Chicks rolled through the second half becoming the first team in the ToRD season to crack 200 points in the commanding 63-point win.

*Check out layer9.ca for track-side video. ToRD’s regular season comes to a close with a double header on February 20 featuring a first-place showdown between the undefeated Gores and the Chicks.