This was the fourth semi-final meeting between the Chicks and the Dolls, but the first since 2011. The Chicks have won all four games. (Photo by Greg Russell)

After a regular season matchup that saw these two teams separated by only 25 points, expectations were high for Toronto Roller Derby’s semi-final showdown between three-time ToRD champs Chicks Ahoy! and two-time champs the Death Track Dolls; they were only heightened when the Chicks—tops in the league during the regular season—lost their page playoff quarterfinal to the Gore-Gore Rollergirls, while the Dolls easily toppled the Smoke City Betties in theirs. However, when the final whistle blew, it concluded the most complete 60-minute game that the Chicks have put together this season, one that resulted in a statement making 238-74 win, a victory that set up a historic, and perhaps fitting, showdown against the Gores, their long-time rivals, in the Battle for the Boot X. 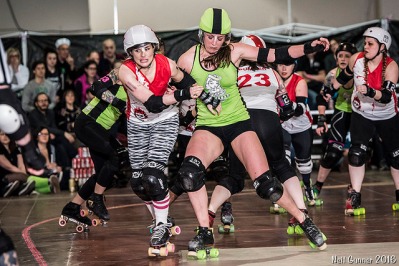 Breakout rookie jammer Holly Rocket got the Dolls off to a quick start with lead jammer status and 4 quick points on the opening jam, but it would be a misleading start as the Chicks would roar back with five straight lead jammers to take a 32-7 lead and prompt the Dolls to take their first time out (one of two in the half). Early on, the game was fast paced and wide open, leading to relatively spread out packs; it was a style of play far removed from the slow, defense-heavy style that had given the Dolls some success this season, but the Chicks seemed to thrive, winning one-on-one battles in the pack and transitioning nicely between offense and defense.

While the Dolls’ time out was followed by back-to-back leads (the only time they’d pull this off in the half), it didn’t lead to anything sustainable and was followed by remarkable stretch of seven straight lead jammers for the Chicks, a dominant run that saw them outscore the Dolls 51-0—concluded by a 28-point power jam skated by Boxcar—and all but put the game away. Boxcar was actually one of the big storylines in this playoff game. The first-year transfer had no luck in the regular season game against the Dolls managing only 1.8 points per jam and a 27% lead percentage; however, in the first half alone, the veteran scored 63 points (10.5 PPJ) on the strength of a perfect 100% lead percentage (leading to full game totals of 101 and 92%). She was not alone in having success either, as of the fours Chicks jammers only rookie Banshee was held to less than double-digit totals in the opening period: Monster Muffin had 51 points and Pink Slamminade notched 28.

Betty Bomber and Robotomy attempt to contain Boxcar who torched the Dolls for 101 points. (Photo by Greg Russell)

While the Chicks began to tighten up the packs late in the first half, seemingly playing into the Dolls’ hands, the Chicks also played a relatively cleaner first half overall and the pack advantages lead to clear defensive advantages as well. Despite continuing to play well as a duo with Commander Will Wrecker, veteran Doll Dawson had an uncharacteristic five penalties in the opening half, and Stringer Belle eventually fouled out with an unusual eight penalties, an indicator of how out of sorts the Dolls were. Of the 21 first half penalties the team accumulated, four of them were to jammers, and the Chicks took advantage of those power jam opportunities to extend their considerable lead to 148-34 at the break.

If the result was not already a foregone conclusion at half, the Chicks made sure to dispel any notions of a Dolls’ comeback with a thoroughly crushing opening 10 minutes of the second period: over the opening nine jams of the frame, the Chicks nabbed all lead jammer statuses and put the game definitively out of reach with a 39-1 run; a run that increased their lead to 187-35. 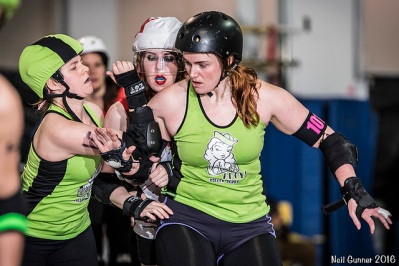 Biggley Smallz continues to be the linchpin of the Chicks’ pack providing reliable one-on-one last-line of defense blocking at the front of the pack; heavy hitter Vag Lightning also played one of her best all-around games of the season, continuing to deliver devastating hits (including one late shoulder-to-sternum blow to relief jammer Ellen Rage that left the Doll slow to get up on the inside of the track), Vag also delivered timely offense and played a—comparatively—clean game. But there truly were strong performances and stand out moments through the Chicks’ lineup and their pack was bolstered by the return of pivot/jammer Sleeper Hold, who was excellent with the stripe; the 2015 ToRD leading scorer was never needed in the jammer rotation on this night. 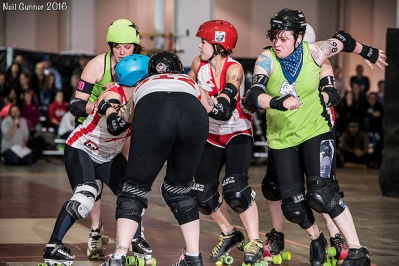 Midway through the second, with the game out of reach, the Dolls did go on their most spirited run of the bout. Nabbing five leads in a row (and six of seven) culminating in a 26-4 run that inspired the bench, but didn’t put too much of a dent in the deficit. While the ToRD season is a wrap for the Dolls now, the future does look potentially bright. Dasilva continues to develop into a on-track defensive force and Wheatabitch has steadily improved all season, both benefiting from playing with vet Betty Bomber this season (who, in addition to linemate Robotomy, announced that she will be moving at the conclusion of the season); the most optimistic aspect of the team is the jammer rotation where Bat Ma’am (29 points, 33%) and Holly Rocket (28, 43%) have shown that they can lead an offense and Ellen Rage is developing into a viable double threat.

However, that mid-period run was short-lived and the Chicks recovered to close out strong, wrapping up the 164-point playoff victory with relative ease and extending their season.

The Dolls are not done for the year, however, as they will travel to Montreal for the Beast of the East in a few weeks with the Betties and the Gores, while the Chicks now have nearly two months to prepare for their sixth Battle for Boot against long-time foes the Gores on June 11. The two teams have each won three previous championships.

*ToRD’s farm team, the D-VAS, also kicked off its 2016 season on Saturday, falling to Hamilton’s Hammer City Rollergirls 218-109. Both games will be archived on layer9.ca. Also, Rogers TV broadcast the games; keep an eye out for intermittent replays in the coming weeks. 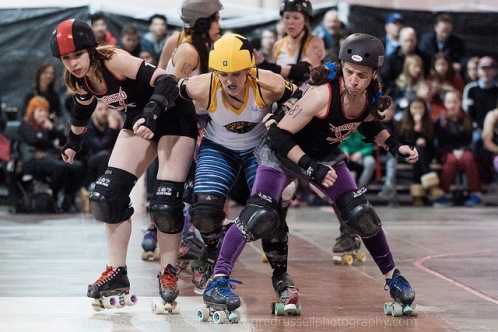 The D-VAS and Hammer City gave fans a glimpse of the future of the respective leagues. (Photo by Greg Russell)