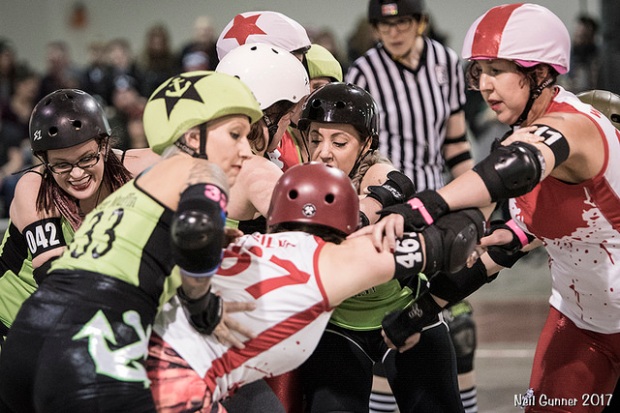 The Dolls’ 141-140 victory over the Chicks Ahoy! was the narrowest in ToRD history. (Photo by Neil Gunner)

The scheduling just happened to align: the matchups featured two undefeated teams looking to take an early lead in the standings and two winless teams searching for that all-important first win. On paper, it looked as if there were going to be two incredible games, and while reality doesn’t always meet expectations, on this Saturday night early in Toronto Roller Derby’s 2017 season, it’s possible that those lofty expectations were actually passed. Perhaps sensing this potential, there was yet another vocal crowd at the Bunker and those in attendance were treated to what may end up going down as one of the most exciting double headers in Toronto Roller Derby history, and certainly in recent memory. When the track was cleared, the Death Track Dolls’ razor-thin win over defending champs Chicks Ahoy! saw the Dolls atop the standings for the first time since 2014, while the Smoke City Bandits’ upset over the Gore-Gore Rollergirls marked their first league victory since winning the 2015 Battle for the Boot.

October 17, 2009. That’s how far back you have to look to find a Toronto Roller Derby house league game that came close to featuring the kind of ending we witnessed at the Bunker this past Saturday night. In October 2009, it was the Death Track Dolls who found themselves mounting a frantic late-game comeback against the Chicks Ahoy!: a 21-1 run over the final two jams saw the Dolls’ comeback end just short, falling 92-90. Seven years later, it was the Chicks whose 29-4 run over the final five jams came up short allowing the Dolls to hold on for the one-point victory. 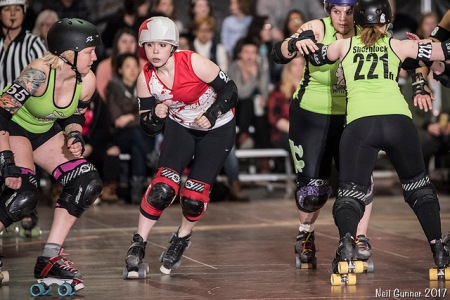 Dolls’ jammer Ellen Rage prepares for contact from Joss Wheelin’, who was making her season debut after injury. (Photo by Neil Gunner)

With both teams coming off of dominant performances to kick off the season, this game was seen as an early test of league superiority, and it’s safe to say that nothing was settled. It was back and forth from the outset with the Chicks getting out to an early lead 18-8 before a 19-0 score jammed by emerging double threat Ellen Rage blew the game wide open and gave the Dolls their first lead. It was, however, short lived. The Chicks responded with a 13-0 pick up by second-year standout Banshee. It was a lead that held up for precisely two jams. While another eventual 9-point pickup for Ellen Rage gave the Dolls a game-high 20-point lead, the Chicks barely flinched and patiently chipped away until a late 17-point power jam tied up the score at 64. The Dolls managed to pull ahead by three on the final jam of the half to hold a precarious 67-64 lead at the break.

The second half opened with a gruelling stretch of superb defence from both sides with points suddenly extremely hard to come by. The grinding tight-pack work that has propelled these teams to the top of the standings was on full display as each team managed only three scoring jams over the first ten jams of the half, with the Dolls scoring 10 to the Chicks’ 9 to retain a narrow 77-73 lead.

Lock-down defence from both packs made points hard to come by early in the second half. (Photo by Neil Gunner)

Up to this point in the game, the large leaps in scoring were generated mostly by the inordinate amount of power jams (another testament to the excellent pack work). In the first half, the disciplined opponents had only eleven total pack penalties, compared with nine jammer penalties. When the jammer penalties stopped, so did the scoring. In the end, it was a very clean game by both teams (and well called by the ref crew) with the Chicks picking up twenty-five penalties to the Dolls’ twenty-two.

Although the Dolls never did give up the lead the rest of the way, they never led by more than 26 points either. They pulled ahead by that amount with about five minutes left in the game and that’s when the Chicks went on their run, culminating in a frantic final jam that saw the Dolls’ jammer Scrappy pick up two penalties allowing Banshee to score 14 points. There was a brief moment of confusion when it appeared as if the Chicks had made up the 11-point gap that remained, until, that is, Scrappy’s 4 box points were added, giving the Dolls the 1 extra they needed to hold on for the win.

In the pack, the Dolls’ duos of Dawson and first-year Madison transfer Kate Silver and Rainbow Fight and Montreal transfer Candy Crunch continue to build into a solid defensive pairings, while Dasilva had another central roll in a hard-hitting game aided by the added muscle of Brickhouse Bardot (playing her first league game with the Dolls after a transfer from the Bandits). Another former Bandit Babushkill had arguably her strongest game with the Dolls yet.

Banshee led the game in scoring including an exhausting 14 points on the final jam to pull the Chicks within 1. (Photo by Neil Gunner)

It was announced this game that the Chicks will have to move forward without blocker Kimmie Somore who will be relocating, but they balanced out that loss by welcoming back Joss Wheelin to the pack—who looked as if she’d barely missed a step. The dynamic Rosemary’s Rabies, team captain Francesca Fiure, and double threat Boxcar continued their strong seasons, and the team also welcomed back recent transfer Noodle Kaboodle, who finally debuted for the Chicks after a long recovery from injury. After a hesitant start, she improved as the game wore on, and provides the team with yet another double threat to further deepen their lineup.

Banshee had an excellent game with the star, particularly in the second half where she scored 41 of her 59 points in the game and led the Chicks with a 64% lead percentage overall. Sleeper Hold scored 26 points in the first half finishing with 39 (on 42% lead percentage). The potentially game changing Monster Muffin was mostly held in check (29, 31%) and it was a similar story for the Dolls’ Rainbow Fight who despite notching a 67% lead percentage managed only 8 points over six second-half jams. Holly Rocket (32, 67%), Bat Ma’am (30, 36%) and Scrappy (33, 33%) chipped in similar amounts, while Ellen Rage continued to put up incredible offensive numbers in a limited roll, scoring 28 points over four first-half jams.

The Smoke City Bandits entered the game on a five-game losing streak. Since winning the Battle for the Boot in 2015, the Bandits had gone a year and a half without a ToRD victory. It wasn’t a great stretch, but still nothing like the record stretch of futility the team then known as the Betties went through from 2009-2012: after a massive off-season roster change post-2009, the team went on a nearly three-year long winless run that saw them lose ten games in a row, often by then league-record margins. There are only two skaters remaining on the Bandits who experienced the totality of that losing streak and both were on the track on Saturday night as the Bandits once again found themselves attempting to end a streak. Interestingly enough, just as they were in 2012, it was the Gore-Gore Rollergirls who were their opponents when they ended it.

In her second game back in the jammer rotation, titmouse had another strong performance with 51 points and a 60% lead percentage. (Photo by Neil Gunner)

Genuine Risk and titmouse are those two remaining skaters and both now find themselves part of a revamped jammer rotation. After two years in the pack, titmouse returned to jamming this year at the urging of her team, she admitted in a post-game interview, and has been excellent scoring 51 points on a 60% lead percentage in this game.

As with the Bandits’ season opener, this game was a tale of two halves, with the team unable to muster much offence over the opening thirty minutes, putting up only 34 points at the break. The Gores, however—certainly feeling the absence of team leading scorer Beaver Mansbridge—couldn’t put the Bandits away. Although they led for virtually the entire half (it was tied after the third jam) and picked up thirteen lead-jammer statuses to the Bandits’ nine (including seven in a row at one point), they gave up four power jams putting in monumental efforts on the power kills that eventually took their toll.

Despite strong individual efforts and dominating lead jammer stats, the Gores couldn’t put away the Bandits in the first half. (Photo by Neil Gunner)

The Gores offence in the first half was paced by rookie jammer Mina Von Tease, who put up a game-high 30 points to that point. The Bandits took notice and after the break Von Tease was matched up jam for jam for the entire half against titmouse and was held to only 8 points.

The Bandits essentially dominated the second half, completely turning the game around on the Gores who couldn’t seem to make the necessary adjustments. Over the first eight jams of the half, the Bandits picked up lead for five of them, outscoring the Gores 48-5 to take the lead. Once they began to take advantage of the power jams that the Gores continued to give up (eleven total jammer penalties in the game), they began to pull away.

In the end, the Bandits outscored the Gores 114-41 in the half on the way to the 49-point victory.

Bandits rookie jammer Killa HurtZ led the team in scoring for the second straight game with 61 points, most coming in the second half. (Photo by Neil Gunner)

The Gores relied heavily on their core blockers of Santa Meurte, Will Wrecker, Viktory Lapp and Stabbey Road (and welcomed back Moose Knuckles after a long recovery) but penalty trouble and that amount of time on power kills eventually took their toll, with the Bandits able to split the packs and draw the Gores into one-on-one battles. Mina Von Tease led the Gores with 38 points while Thighlight of Your Life made use of an 88% lead percentage to score 21 points. Murdercat! (20 points) and rookie Flapjack Tango (17) rounded out the scoring.

The one noticeable improvement on the Bandits is how evenly distributed their pack seems to be: the deepest it’s been since the championship run two years ago. Morton and Anne Bulance went toe-to-toe against a Gores team that has the potential to push teams around, while the lively play of players like Lowblow Palooza, Jam’herhead Shark, Juggernaut J and Jessica Rabid can, and did, frustrate.

*The regular season comes to a close on March 4th when, once again, all four teams will be in action. Come watch the Dolls play the Bandits and the Gores take on the Chicks to determine final playoff seeding.

*All stats are unofficial