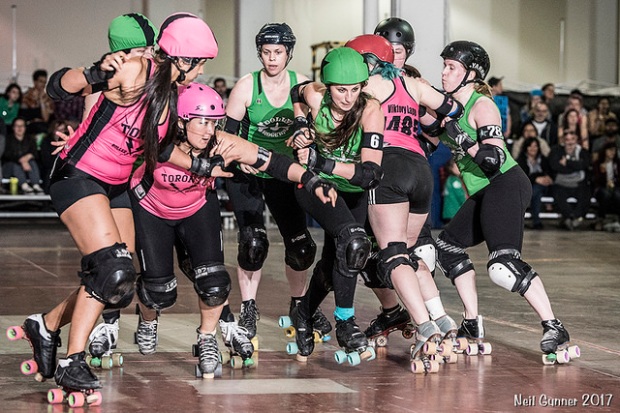 The tightly played, highly disciplined game between Toronto and Capital City lived up to expectations (Photo by Neil Gunner).

It was a highly anticipated matchup at the Bunker on Saturday night as two WFTDA Division 2 teams on the rise squared off in a critical matchup. Coming in ranked 81st, the visitors, Ottawa’s Capital City Dolly Rogers, sported a 3-0 record in 2017 that included sanctioned wins over Muddy River (101st) and Quebec (82nd) and that saw them leap an incredible 34 spots in the WFTDA rankings. Toronto was also off to a blazing start with a 380 -138 stomping of Roc City helping to propel them 10 spots up the rankings to 89th. The first-ever meeting between these two teams lived up to the high expectations: it was a tight, disciplined, very well played game of flat track roller derby that saw Toronto clamber back from a slow start (and a slim half-time deficit) to pick up the 144-129 win. 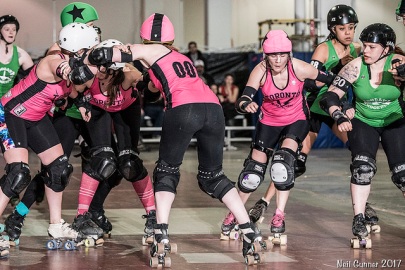 Capital City came out flying with the first three lead jammer statuses (including the game’s first power jam) and an 8-1 lead, before All Stars vet titmouse nabbed the first lead for the hosts and proceeded to rack up 17 points on three natural grand slams as a Boxcar- and Jessica Rabid-led pack shut down the Capital City jammer. However, a successful Capital City official review saw titmouse boxed for a skating out of bounds penalty and the second early-game power jam saw the Dolly Rogers maintain control, picking up 6. A second consecutive power jam (and third of the game) saw them retake control. With the offense being led by RebelLion and Buffy Slay’her, Dolly Rogers’ eventual leading scorer Tank laid down 15 points to help bring Ottawa’s lead to 40-18 ten minutes into the opening half.

Toronto responded with four of the next five leads to put together a 24-13 run to inch back into it, and they closed out the first half with their most dominant stretch of the game picking up six of the last seven leads that saw them briefly take a 4-point lead before Tank once again picked up crucial points in the final jam to give Capital City a narrow 83-82 lead at the break. 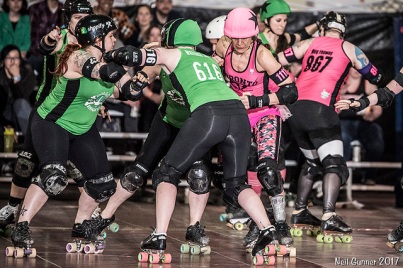 Capital City’s RebelLion (left) and Watcher Ash (616) led a smothering first half defence that helped the Dolly Rogers take the lead at the break. (Photo by Neil Gunner)

Tank was actually the team’s leading scoring jammer at the half with 35 points, though Kaio-kensi was not far behind with 21. titmouse led the way for Toronto with 40 first-half points (on the strength of a game-high 17 pointer); Banshee was right behind with 26 points. The first half (and indeed the whole game) was played very cleanly with Capital City picking up fifteen penalties to Toronto’s twelve (Toronto would end up with twenty-three to Capital City’s twenty-seven).

After a surging close-out to the first half, Toronto picked up right where they left off to open the second: a five-point pick up in the opening jam saw Toronto retake the lead, and it would be one that they would not relent the rest of the way. Defense would be the name of the game in the tightly played and low-scoring second half and Toronto’s balanced packs led the way. For example, The All Stars shut out jammer Kaio-kensi in the second half over six jams, with half of the defensive packs led by one line that included Gore-Gore Rollergirls teammates Santa Muerte, Will Wrecker and Viktory Lapp (balanced out by the hard-hitting Morton) and the other led by the Chicks Ahoy! dominated line of Boxcar, Meg Fenway and Annguard, though led on this night by their Smoke City Bandit linemate Jessica Rabid. 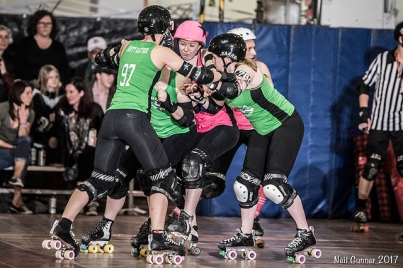 Jessica Rabid had a breakout game for Toronto–the recipient of key star passes and putting in a few jams with the star in the second half. (Photo by Neil Gunner)

Jessica Rabid was actually all over the track for Toronto; originally a skater with Ottawa’s Rideau Valley Roller Derby, Rabid seemed especially fired up for this matchup against her former cross-city rivals and was dominant on defense, took a critical star pass in the first half and even took to the start line with the star on a few occasions in the second half (picking up two leads and 9 points).

Toronto picked up six of the first nine leads of the second half to extend their lead to fifteen (112-97) ten minutes in, but Capital City refused to go down quietly.

Looking to spark their offense, the Dolly Rogers expanded their jammer rotation in the second half, giving the powerful RebelLion the star at times, and at one point Tank acting as pivot led a lock down pack on titmouse that allowed Alhurta Beef to pick up 12 points for Capital City to narrow the gap to 128-115 with ten minutes to go (the damage was limited by a titmouse star pass to Boxcar and a crucial drag back from Meg Fenway that stemmed the points flow and forced the call off). 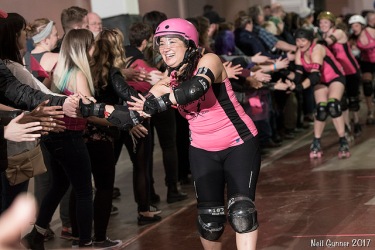 Toronto improves to 2-0 on the season with the win. (Photo by Neil Gunner)

That was, however, as close as Capital City would get.

With the Dolly Rogers held to only 46 points in the second half, it was a strong defensive performance from a Toronto team that looked a little loose defensively in their season-opening win against Roc City and, similarly, it was a very strong performance from an excellent Capital City team in the loss. The core of this team includes members of the 2014 Fresh and Furious winning team (blocker Edmonton and the aforementioned Kaio-kensi were stars of that team and are crucial components of the Dolly Rogers now) and that continuity is evident. Tank led the way in scoring for the visitors with 52 points on a 55% lead percentage, while Watcher Ash had a huge game in the pack.

Toronto was led offensively by titmouse’s 59 points (on a 54% lead percentage), while Banshee used an impressive 64% lead percentage to pick up 49 points; Wolverina rounded out the primary scoring for Toronto with 23. 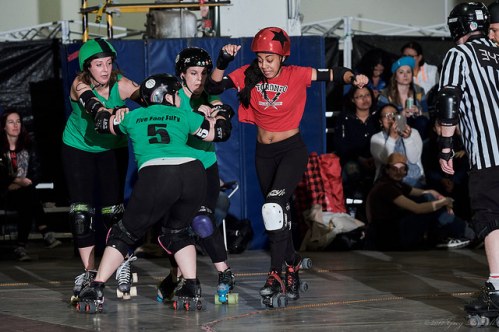 The Vipers’ Skate of Emergency looks to sneak through on the inside past a trio of Cannon Dolls. (Photo by Greg Russell)

*The Toronto Vipers also hosted Capital City on Saturday night and picked up their first win of the season against the Cannon Dolls. The 217-148 victory balances out their record after a season-opening loss to Belleville.