It was a busy weekend for Canada’s WFTDA teams, with most of Canada’s top teams spread out across the continent for important regular season matchups.

Montreal had to have hit the West Coast with high expectations, especially after Vancouver’s Terminal City was able to knock off one of their opponents, the Oly Rollers, last weekend. Unfortunately, it was not meant to be. Canada’s top team went 0-3 against incredibly tough competition in Rat, Rose and Oly. The losses will affect their WFTDA rankings (although they lost only 3.6 points on Flattrackstats on the weekend), but the loss to lesser ranked Rat and Oly, especially, shows that they still have a lot of work to do before season’s end to finally attain that goal of making Champs.

Toronto entered the weekend on a massive 8-game slide, and were looking for some positives heading into a busy summer. Things started off rough on Saturday against a tough Jacksonville team whose incredibly fast and agile jammers ran roughshod over the team. However, Toronto found their form against lesser opponents as the weekend went on, handling a strong Jet City with ease before crushing Cincinnati to close out Spring Roll (it’s hard to believe this Cinci. team beat Toronto a year ago). They were confidence-boosting wins that the team needed as it looks to shore up a favourable playoff spot.

The Thunder headed to Spring Roll hoping to improve their tenuous hold on a Division 1 playoff spot; unfortunately, things didn’t necessarily go as planned. Given a favourable draw for the weekend, Tri-City did go 2-2 for the tournament, but the results were not quite as expected. The wins came against a D-2 non-playoff team (Big Easy) and a D-3 team (Glasgow, though due to lack of high-level competition, Glasgow’s ranking is probably far too low), but both wins were within 40 points. The loss to Jet City, despite being ranked below the Everett-based team, was a missed opportunity to knock of a low-ranked D-1 team, and the upset loss to a determined Chicago Outfit team just trying to qualify for the D-2 playoffs had to have hurt.

The Rideau Valley Vixens headed to the East Coast to take on Maine’s Port Authorities in a very important D-2 showdown between two teams who have made significant jumps early in 2014, and the Vixens came away with the win: another step in securing a D-2 playoff spot.

Closer to home, the GTA Rollergirls G-sTARs hosted Alliston’s Renegade Derby Dames Striking Vikings in WFTDA action. This was the second sanctioned bout for the G-sTARs after a loss to London’s Timber Rollers to kick off the season. It was the first ever sanctioned game for the Striking Vikings. It was an incredibly tight game, especially in the first half (the Vikings had a 12-point lead at the break). Some excellent half-time adjustments for the G-sTARs saw the hosts take a lead early in the second that they were able to hold onto for the remainder of the game. Neither team has yet to be ranked (they must play three sanctioned games for an initial ranking), but both will be looking to make inroads into D-3 before the season is over. 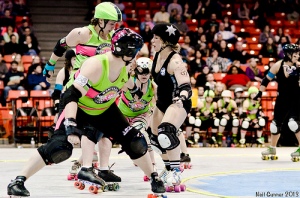 Montreal’s New Skids on the Block (currently ranked 17th in the WFTDA) travelled to Chicago this weekend to take on Chi-Town’s two WFTDA teams: the Windy City Rollers (6th) and the Chicago Outfit (34th). It had been two years since Windy and the Skids faced off (Windy City took that matchup 130-105), and it seems that not much has changed since then. In another tight, exciting game between two teams that have high hopes for the WFTDA playoffs this year, the Windy City Rollers skated away with a 249-211 victory in what was a fast paced, high scoring game.

On the undercard for the evening, Toronto’s CN Power took on Windy City’s Second Wind and beat the B-Team 231-179. It was the first regulation (IE: non-sanctioned) bout of the year for Toronto and coming after an up-and-down Quad City Chaos, it provided a much needed confidence boost (the 52 point victory exceeded statistical expectations).

Montreal closed out the weekend with a closed, sanctioned bout against the Chicago Outfit on Sunday. The Skids avenged their Saturday night loss with a massive victory over the Outfit, 339-88, an impressive victory over another First Division team, and one that made the playoffs last year as well. The Skids improved their record to 4-1 on the season and look phenomenal early on in 2013. The one question that remains is can they maintain it? It has seemed in the past that the early-season-bout-heavy Skids have peaked too early in the year, only to run out of steam come playoffs.  They’ve got games this month against River City (the 14th) and Toronto (26th).

FOREST CITY ON THE VERGE OF FULL WFTDA STATUS

Forest City’s WFTDA Apprentice Timber Rollers hosted Toronto Roller Derby houseleague team The Death Track Dolls in their second (of two) mock sanctioned bouts as a requirement of their apprenticeship. For the first time, Forest City has separated its travel team roster from its home teams to improve competitive play, and it has seemed to pay off so far in 2013. Entering the game on the heels of victories over Tri-City’s B-team and Royal City’s Brute-Leggers, they faced off against the Dolls in their new venue, the Agriplex, to a near capacity crowd.

The Rollers flew off the jam line to start things off, amassing a 33-0 lead before the Dolls were able to get their first lead jammer status and their first points (courtesy of Audry Hellborn, who had a strong opening half with the star). It only stemmed the flow, as they increased their lead to 68-9 (Audrey would score the first 13 points for the Dolls) at the midway point of the half. Comparatively, the Rollers penalty box was quiet during the first half, while the Dolls ran into early penalty trouble and gave up three power jams in the period. The Rollers were up 102-37 at the half.

The Rollers have built the team around a strong core of veteran blockers led by Sufferjet, Dollface Massacre, Back Alley Sally, Freez’er Burn and Anya Face, but also a new generation of on-track leaders like Andi Slamberg and Glamarchist. While double threats Slamberg and Pixie Kix provided solid offense with the star, Bloodlust Barbie is the breakout jammer of the 2013 Timber Rollers and gave the Dolls a hard time all night.

In her second game with the Dolls, Rainbow Fight looks increasingly comfortable in her new league. (Photo by Joe Mac)

The Dolls entered the game with a far different lineup from the one that defeated the Chicks Ahoy a few weeks ago, and with some rookies and less experienced (or just newer skaters) getting a lot of track time, it took a while for the team to get going (they scored 28 of their 37 first half points in the final 12 minutes). The Dolls came out much stronger in the second, earning the first four lead jammer statuses. But while it was a much more even half (the Dolls would eventually outscore the hosts 62-58 in the half), the Rollers managed to keep pace and not relinquish the lead they’d so carefully built early in the game. A strong line of Dollface, Sufferjet, Freez’er and Pixie finally were able to shut down the suddenly hot Dolls early in the second, a confidence boosting jam that got the Rollers back on track.

The second half was actually an exciting half of derby marked by momentum shifts and scoring runs from each team, with the final score being 160-99. Dolls co-captain Scarcasm and Sinead O-Clobber were both strong on defence, while Getcha Kicks provided some strong relief jamming in the second half, and recent transfer Rainbow Fight was able to play her second game with her new squad and looked increasingly impressive in the pack, but especially on the jam line. Most importantly for the Dolls, second year skater UpHer Cut and rookie Chicken Sluggets (in her roller derby debut) gained a ton of track time, which could come in handy later this season as they continue their quest to finally reach the ToRD championship.

In the opening game of the night, a new-look Thames Fatales led by veteran blocker Jemicide, double threat Mirambo and rookie jammer phenom Kindree Surprise, took out their co-houseleague team the Luscious Lunch Ladies 186-82. The Ladies were led by Killary Tough, the mulit-talented and surprisingly agile Anne Tastic, and power jammer Torque E. Mada. One of this country’s oldest leagues, Forest City seems to have taken a turn toward a more competitive focus in 2013 and look to be well on their way. 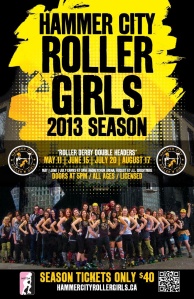 Hammer City fell to 0-2 on the year, but nonetheless, seem to have turned a corner.

Just over a month after ToRD’s CN Power and Bay Street Bruisers traveled south to take on the Fort Wayne Derby Girls, Hammer City and Royal City did the same this past weekend. In the opening game, the rapidly rebuilding Brute-Leggers took on The SWAT Team in a high scoring contest that saw the hosts hold on for the 218-168 victory. In the main event, the Hammer City Eh! Team took on Fort Wayne in a WFTDA sanctioned bout. Hammer City and Fort Wayne have a history that dates all the way back to 2007, but the last time these guys squared off in a WFTDA bout was in 2010 (a 119-44 Fort Wayne win). Hammer City, who have had a rough go of it for the past few years (including enduring the WFTDA’s longest losing streak), seem to finally be turning things around, and lost narrowly 199-177 on the weekend (falling to 0-2 on the season).

And finally, just in case you missed it, the first ever Canadian Power Rankings were released on the Nerd yesterday. Read about the first rankings here.