The Gore-Gore Rollergirls were the model franchise of ToRD’s first half decade.  In the first five seasons they appeared in every championship game and compiled an impressive 17-3 overall record (13-1 regular season, 4-2 playoffs) that included a 12 bout ToRD winning streak that stretched from 2009 to last season’s Battle for the Boot. As last season began, there was little indication that this would change. They stormed out of the gates in 2011 defeating the Death Track Dolls to kick off the season (the Dolls, by the way, are the only team to ever defeat the Gores in a regular season game). They would continue their winning streak, posting their third straight undefeated regular season, but they would also have success outside of ToRD as well. 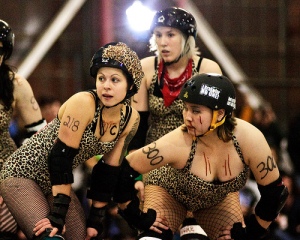 The Gores have been the most succesful team in ToRD's early history. (Photo by Kevin Konnyu)

Entering the Beast of the East as slight favourites, they lost in the early going in a final-jam nail-biter (to the Vicious Dishes), but persevered to book their ticket to the final where for the second time in the tournament they fell in dramatic fashion to some final-jam heroics (this time to RVRG‘s Slaughter Daughters). Nonetheless, it was their first appearance in the tournament final and topped a successful Beast for ToRD teams (who finished second, third and fourth).

But in the Battle for the Boot they were brushed aside by a Chicks Ahoy! team that had been on the rise all year, and exposed some possible depth issues with the Gores. Never able to fully replace Lunchbox, the Gores relied too much on a two-jammer rotation, and their once dominant pack did not have the bench depth to compete against the Chicks. The margin of defeat, 111-46, was the greatest the team had ever suffered in ToRD play. 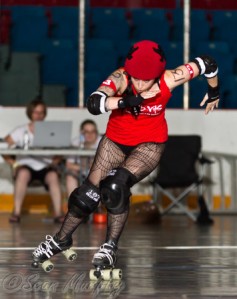 hellbat showed no fear of jamming in her time with the D-VAS. (Photo by Sean Murphy)

There isn’t much change to the Gores’ roster in 2012. Motley Cruella and Lulu Cthulu (a promising rookie in 2011) are gone from the lineup, but to this day, it is obvious that the Gores are still feeling the 2010 retirement of jamming great, Lunchbox. Despite attempts last year to incorporate Brim Stone into the jammer rotation, her value in the pack was simply too great to give her a regular spot. But the answer may have finally come in the Gores’ sole draft pick this year, hellbat. A two-season D-VAS veteran, hellbat seems custom made for the Gores. A confident swagger, a fearless attitude, and perhaps more importantly, a hunger for the star make her the ideal Gores draft choice.

But with very little change in the roster, it will be of vital importance to develop from within, and some second and third year skaters will have to be called upon to step up their games if the Gores hope to compete for the Boot once again this season. 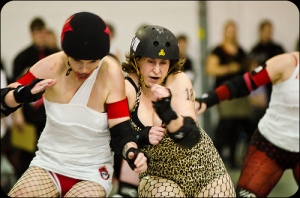 The Gores generally rely on veterans like Molly Boom to pivot. (Photo by Kevin Konnyu)

His Unholiness the Reverend Ramirez returns for an unprecedented sixth season behind the Gores bench and his calculating calmness has become an essential element of the Gores bench. With so little change in the lineup he’s got a veteran crew to work with.

Pivot:  Last year Molly Boom was the dominant pivot for the Gores, with veterans Brim Stone, Lady Gagya, Kandy Barr and Foxy Sinatra rounding out an experienced core. Another long-time Gore Junkie Jenny has also been known to don the stripe, and don’t be surprised to see some second and third year skaters (like Chronic, for example) get some opportunities to lead the pack.

Blocker: Over the past two seasons the pack has revolved around a core group of Hurlin’ Wall, Aston Martini, Santa Muerta, Chronic and Gamma Rei. With no new additions to the pack, there will be a great opportunity for third year skater Miss Kitty La Peur (who spent most of last year on injury reserve) and second year skaters Emma Dilemma, Mace O’Kissed, Wheely Nasty and Draculaura (formerly known as Pinky Violence) to step into more crucial roles in the pack. 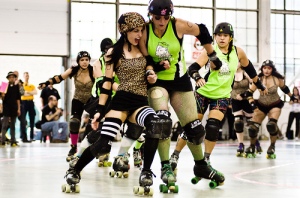 Bambi has recorded the highest JQ rating in 4 of ToRD's first 5 seasons. (Photo by Kevin Konnyu)

Jammer: In Bambi and Dust Bunny, the Gores have two of the most dominant jammers in ToRD’s early history (Bambi has recorded the highest JQ rating in four of the league’s five seasons, with Dust Bunny in 2007 the only skater to ever rate higher). But after that, it trails off. 2011 Triple Threat Brim Stone is more than capable, but will undoubtedly be needed in the pack; Santa Muerte could be called upon to take up some of the slack while rookie hellbat evolves into a regular role on the rotation as the season progresses. 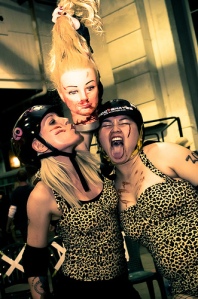 Dust Bunny and Gamma Rei after a 2011 regular season win over the Chicks Ahoy! (Photo by Kevin Konnyu)

The Gores will need to develop from within to compete with the Chicks’ this season. Arguably, they have an advantage in that they retained most of their roster from last season, but as it stands, still look incapable of competing with the Chicks over the long term. While they will be pushed by the Death Track Dolls (and maybe even the Smoke City Betties, who surprised them them in last year’s season finale), they have the offensive depth (fantastic jammer-blocker communication and comfort) to be competitive. Look for the Gores to start slow and build as the season wears on and some gaps are slowly filled by developing skaters. When the playoffs roll around, don’t be surprised to see the Gores in their sixth straight Battle for the Boot.

***The Chicks and Gores meet in the 2012 season opener at The Bunker in Downsview Park. Tickets are on sale now! The Bout will also feature a showdown between this year’s D-VAS in a D-VAS Black vs. D-Vas Red bout. Doors for this double header open at 5:00 PM.

As I’m in the middle of writing the preview for the playoff bout between the Death Track Dolls and Chicks Ahoy! (they face off in the 2011 ToRD playoff semifinals on June 11), I thought in lieu of a traditional preview for this final regular season bout of 2011, it would be interesting to take a look at the head-to-head history between these two teams. And of course, because of the fantastic work of layer9, so much of it has been caught on video for your viewing pleasure.

The first ever meeting between these two teams was, not surprisingly, another classic, but this time a shoot out that unfortunately was a closed  bout and therefore played to only a small audience. Also not surprisingly, given the high score, two jammers picked up MVP. The Dolls’ Mistress Nightmare (since retired) and her Chicks’ counterpart Candy Crossbones—who may be playing her best derby in 2011—were named top players. It was the Chicks second of three straight wins to kick off ToRD’s debut season. They would go on to lose the first ever Battle for the Boot to the Gore-Gore Rollergirls. The Dolls would finish fifth in the six-team league.

This sole meeting between these two squads had to be called after only one period due to injuries (ToRD bouts were still three periods at this point);consequently, the Chicks were awarded the victory by forfeit. It would be the Dolls’ only regular season loss in 2008 (a run that included the only regular season loss ever sustained by the Gore-Gore Rollergirls, albeit in a closed bout under controversial circumstances).

The Chicks Ahoy! Juggernaut could not be stopped in 2008 and they rolled over a short-benched Death Track Dolls in this post-season blowout. It was a bout full of controversy and one that would lead to the explosion of the Dolls’ roster and the beginning of the first rebuild in the team’s history. For the Chicks, this would represent a high point for the team, and they’d ride the victory all the way to the Battle for the Boot and their first (and thus far) only ToRD championship.

Immediately considered a ToRD classic, the Death Track Dolls gave the defending champs a far greater challenge in this late-season bout. Despite trailing for most of the bout (the Chicks led 54-33 at the half), the Dolls simply would not go away. Led by some amazing jamming from traditional blockers Betty Bomber and Aurdrey Hellborn (who both emerged as dangerous triple threats in 2009) the Dolls stayed with the Chicks until the end despite an injury to star jammer Land Shark early in the second half. In the most exciting finish in ToRD history, it was an extraordinary last jam effort by Audrey Hellborn that almost pulled the Dolls past the Chicks, but time ran out on what would have been an amazing comeback and the exhausted Chicks were just able to hold on for the victory. Do yourself a favour and watch this one.

Based on how the previous season ended, there was a lot of hype for this bout and it not only lived up to but surpassed expectations and was actually a much more entertaining bout (as a whole) than the previous season’s nail biter had been. Both teams traded leads for the first half before a perfectly executed 24 point power jam by Audrey Hellborn blew things open and gave the Dolls a 76-58 halftime lead. This hard-hitting bout looked like it would go down the wire, but a final-jam power jam allowed the Chicks to seal the win.

As expected it was a tight first half with leads traded back and forth early on, but some ill advised penalties that resulted in timely and well executed power jams had the Chicks staying one step ahead of the Dolls, and they cruised to their easiest victory in two years over their rivals.

Watch: First Half, Second Half

Exhibition (Montreal’s Beast of the East 2011)

Both teams began the tournament with victories, which meant that the winner of this bout would advance directly to the quarterfinals while the loser would need to be play one single elimination bout for a chance to advance. Things started off tight with leads traded before a big 10 point pick up by Candy Crossbones midway through the 20 minute mini bout to take a 16 point lead that they wouldn’t give up.

Read the Nerd’s Beast of the East Recap.

After both teams lost tough seminfinal bouts, they met in the third place matchup. The Chicks jumped out to a 12-4 lead 8 minutes in, but the Dolls just seemed to have more left in the tank after two days of ferocious action. The Dolls wrestled the lead away on a power jam and never looked back for a historic first-ever victory over their rivals. Regardless of the outcome, both teams had secured their best ever results in the tournament. In the end the Dolls took third place with this victory, while the Chicks happily settled for fourth.

Read the Nerd’s Beast of the East Recap

At one and one this year, consider this upcoming bout regular season tiebreaker. It will also be a warm up and preview for the upcoming must-win semi-final when a loss means the season is over.

This weekend’s bout will be boutcast live on Canuck Derby TV by the ToRD TV team.

Buy tickets online or at a number of vendors in the GTA.