The Nerd takes a moment for some shameless self promotion of book launches set for April 16 in Toronto and April 17 in Waterloo.

Writing as D.D. Miller, the Nerd’s first book of fiction will be launched on April 16 in Toronto and the next night in Waterloo. Those old blue roller skates on the cover play a significant role in the book.

As some of you may have known, the Derby Nerd doesn’t just write about roller derby; I also write fiction as D.D. Miller.

Next week, my first work of fiction, a short story collection called David Foster Wallace Ruined My Suicide and Other Stories, will be published by Wolsak & Wynn (through its new Buckrider Books imprint).

This book has been a long time coming and features a wide variety of stories all dealing in some way with the vagaries of life in the early 21st century. Of course, roller derby played a part in the writing of the book—as it does in most aspects of my life—but it has a particularly large role in the title story.

The title story is about a character who has a brief, but to him intense, relationship with a significantly younger girl with whom he has remained obsessed, to the point where he’s found a lookalike online cam girl replacement for her. The second obsession that he has is with replacing a David Foster Wallace book that he’d lent to her and never gotten back. Eventually, he discovers that she has become a roller girl and goes to see her play:

“The Toronto Roller Derby League played its games north of the city in the Hangar in Downsview Park. It was a massive space, with huge windows that spread the late-evening summer sunshine across the hard concrete floor and the round track in the middle. Metal bleachers lined the track and they were full of a strange mix of people: punks and jocks and grandmothers and children, hipsters, nerds, a whole posse of women on a stagette. Loud rock and roll blared from speakers sprinkled among the bleachers, and a mohawked man in a slim suit and skinny tie prowled the zone between the track and the seats, stepping over and around the people who sat on the floor lining the track. He yelled into the mic, his face beet red and eyes gleaming: I could barely make out what he said. The louder he got, the louder the crowd got.”

**You can listen to me read from this particular section of the book at the 14:25 mark of this interview I did recently on CIUT’s (89.5) Howl radio show.**

The Toronto launch is set for April 16 at the Gladstone.

For those derby people “in the know” there are a lot of “insider” references specifically for you in this story but there is also some “literary license” taken (for example, in this story, ToRD was playing in the Hangar in 2008—they didn’t actually move there until 2009).

While I will be making appearances across the country throughout the summer and fall (stay tuned!), there are a few specific launch dates set for Toronto and Tri-City (Waterloo specifically).

First up, for those in the GTA, I’ll be launching at the Gladstone Hotel on Wednesday, April 16, 2014, with doors opening at 7:00 PM. This is NOT going to be your typical stuffy literary affair: we’re hoping it will turn into a raucous celebratory party! For more information, check here.

The very next night, I’ll be in Waterloo at Words Worth Books. This will be a (slightly) quieter event, but refreshments will be served!. Check here for further details.

In both cases, I’d love to see roller derby take over these events! You guys have actually read more of my writing than anyone else (for which I am perpetually and eternally grateful), and would love to see some of you there! Thanks! And once again, apologies for the shameless self-promotion!

**For a further preview of the book, read this interview I did about writing and roller derby with Open Book Toronto.

**Also, for those in Toronto who can’t make the launch, I’ll also be reading on April 23rd at the Press Club as part of the Pivot Reading Series. 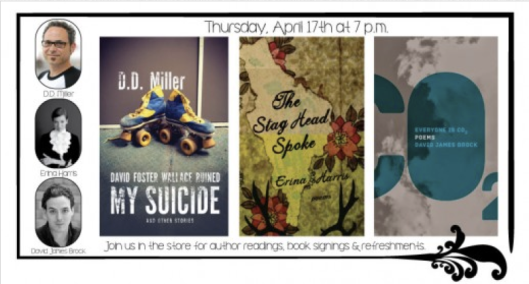 The book will launch at Words Worth Books in Waterloo on April 17th.

First off, if you’ve been a reader of the Nerd over the years, you’ve probably noticed that things look a little different around here. It’s a fresh new look for a fresh new year! But don’t worry, in terms of content and derby nerdiness, nothing will change. However, due to the change, you may notice some formatting inconsistencies, particularly when reading archived material. Feel free to let me know if anything looks truly messed up!

2013 was an incredible year for roller derby, and any way you look at it, 2014 is going to be an even bigger year. Internationally, this will truly be the year that roller derby goes global. The second women’s world cup is coming up, but first, the inaugural men’s world cup will take place in Birmingham, England, in March, making roller derby truly a global undertaking open to all. This global gender equality could very well be the first tentative step toward mainstream (IE: Olympic) international recognition.

A little closer to home, in 2013 Canada certainly announced itself as a power in competitive roller derby. After such a successful World Cup showing in 2011, it seemed only a matter of time before Canadian teams started to emerge as contenders in the WFTDA. This season, it all started with Montreal’s high playoff seeding and Tri-City’s impressive run in the D2 playoffs and was capped off with Vancouver and Toronto’s string of upsets in the D1 Divisionals.

This has set expectations for 2014 very high. Tri-City was recently awarded one of the WFTDA’s D2 playoff Divisional tournaments, which is a great achievement, but perhaps one year too late as all indications show Tri-City making a run at D1 this season. Similarly, while Montreal will be hard pressed to ascend to the ranking heights they hit in 2013, Toronto and Vancouver are poised to make noise and advance up the standings. Also, Rideau Valley (who just missed out on D2 playoffs last year) and Hammer City (who had one of the largest ranking jumps in the WFTDA last year) are both solid contenders in the second division. 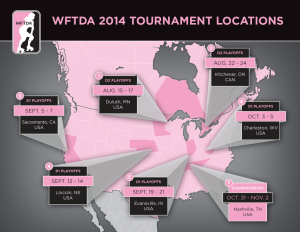 In 2013, Tri-City will become the first non-US league to host a WFTDA playoff tournament.

AND on top of that, we now welcome Forest City, Calgary, Border City and GTA Rollergirls into the WFTDA fold. Last year Calgary made massive competitive strides and could be a team to watch this year and could even be in the mix in the second division. Forest City should be able to build on an inconsistent 2013, while Border City (who are going through a big organizational change) and GTA probably lack the depth of organization to compete in 2014, but nonetheless will help bring more exposure to Canadian roller derby in general, and Ontario roller derby in particular (it’s amazing that there are seven [!] full WFTDA member leagues in Ontario alone).

All of this makes the Nerd very excited to cover 2014!

On this site, you can expect the same Toronto and Eastern Canadian roller derby coverage that you’ve had for years now, but there will also be a very specific global focus as I cover both the Canadian men’s and women’s teams as they prepare for their respective World Cups (expect profiles and interviews). As usual, I’ll be taking the odd road trip as well and reporting back. Actually, that begins this weekend, as I’ll be heading to Detroit to be a guest announcer for the Detroit Derby Girls 2014 house league opener.

Writing as D.D. Miller, the Nerd’s first book of fiction will be released in April. Roller Derby figures prominently in the title story.

Also, after an incredibly fun and informative first season of working on the Canadian Power Rankings with Captain Lou El Bammo, Dick Pounder and Jenny Fever, we’ll be back to track 2014 as well! Stay tuned for a separate Power Rankings Preview coming soon.

And finally, on a more personal note, this spring, I will be travelling around promoting a collection of short fiction written by my alter ego D.D. Miller. Not surprisingly, roller derby features prominently in the title story, “David Foster Wallace Ruined My Suicide.” As some of you know, I am also currently working on a book-length project about roller derby: so every league in Canada (and beyond!) be prepared to be hit up for interviews if I happen to pass through your town in 2014.

Thanks so much for the continued readership and support! Here’s to a phenomenal 2014!