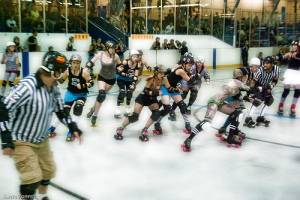 The Gores and Betties’ first playoff meeting was in the 2008 semifinals (won by the Gores 106-70). (Photo by Kevin Konnyu)

The Gore-Gore Rollergirls and Smoke City Betties have an interesting history. The Betties are one of the oldest teams not only in Toronto, but in Canadian roller derby in general. The hosts of the first ever Canadian interleague tournament (Betties D-Day in August 2006), the Betties literally spawned the Gore-Gore Rollergirls:  On the eve of Toronto Roller Derby’s inaugural 2007 season, the Betties split into two, forming the Gores. Although the two sister teams would not meet  during the 2007 season, the Gores asserted mastery over their sisters when they crushed the Betties 120-47 in the 2008 season opener. This dominance continued in subsequent  regular seasons, and spilled over into the playoffs as well, seeing the Gores eliminate the Betties in the 2008 and 2010 semifinals, not to mention the 2009 Battle for the Boot.  Coming in to the 2012 season, the Gores had an overwhelming 7-0 record against their counterparts. Of course, records and streaks are meant to be broken, and during the 2012 regular season, the tides finally turned. In the midst of a team-defining season—and taking advantage of a depleted Gores roster—the  Betties simply overwhelmed the Gores to close out the regular season. Now, for the first time ever, the Betties have to be considered the favourites as they head into this semi-final rematch. 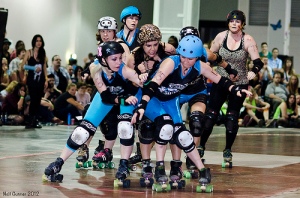 This season, the Betties defeated the Gores for the first time ever (142-50). (Photo by Neil Gunner)

It’s been a season of rebirth for the Smoke City Betties. Despite early season losses to the Death Track Dolls and Chicks Ahoy!, their performances were light years above and beyond those of the previous two seasons. In both games, brilliant beginnings gave way to missed opportunities: against the Dolls, the Betties led at half, while they jumped out to a 22-0 lead against the Chicks before being blown out in the end. But a strong, confidence-building quarterfinal appearance at the Beast of the East showed that this team was on the verge of something special, and it all came together in the regular season finale. It was a fast, even, well-paced game throughout much of the first half, while the Gores leapt out to a quick lead, the Betties always seemed a step ahead. With a killer-instinct not seen in years, the Betties eventually took advantage of an undermanned and battered Gores to run away with it in the end. 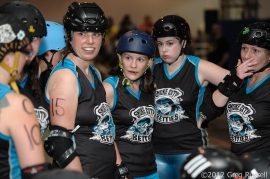 Even with star rookies, the Betties are still led by veterans like Lady Scorcher, titmouse and BruiseBerry Pie. (Photo by Greg Russell)

Consistency has been the trademark of this Betties team, a consistency built from a solid core. Seven skaters skated over 40% of the Betties jams this season, paced by veteran Mia Culprit who lead the league with a 60% track percentage and was the team’s dominant pivot. Sin D Drop-her, Lady Scorcher, BruiseBerry Pie, Platinum Bomb, and Misery Mae provided the leadership support in the pack, while titmouse, putting together the best season of her career (130 points, 50% lead percentage), led a jammer rotation that included BruiseBerry Pie (3.7 points per jam), Wolverina (am emerging double threat) and rookie-of-the year contender Slaptrick Swayze (57% lead percentage). Slaptrick’s greatest challenge for rookie of the year may actually come in the form of her teammate Renny Rumble. Renny looked like a veteran on the track, and was rewarded with ample track time, finishing with a 53% jam percentage and a plus/minus of +70.

A REBUILD IN  PROGRESS 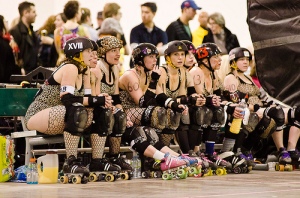 For the first time ever, the Gores did not finish atop the regular season standings. (Photo by Kevin Konnyu)

The Gore-Gore Rollergirls entered the 2012 season having not lost a ToRD regular season game in four years (their one and only loss); they stagger into the 2012 playoffs having lost two of three. After dominating the first five seasons of ToRD (winning three championships and appearing in all five finals), the Gores find themselves in the unusual position of having to face adversity.  Injuries to top jammers Dust Bunny and Bambi (and a lack of depth at the position) coupled with injuries to some key pack players (like Aston Martini) and the retirement of others (like Brim Stone) left the team exposed and vulnerable (and needing to call up D-VAS injury replacements, which they will also have to do for the semifinals), and the Betties took advantage in the final game of the season, serving the Gores their worst defeat in ToRD history (142 points). Their third place finish marks the first time ever that the Gore-Gore Rollergirls have not finished atop the Toronto Roller Derby regular season standings. 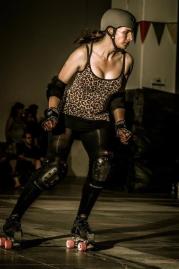 Transfer skater Getcha Kicks will make her ToRD debut with the Gores. (Photo by Joe Mac)

The Gores pack has taken a hit this season, but despite missing another key blocker Molly Boom for this game, they still have a solid core of Lady Gagya, Chronic, and Foxy Sinatra leading the way. Where they may run into trouble is with offense. Despite missing one full game (Bambi) or virtually one full game (Dust Bunny), the Gore-Gore Rollergirls top jammers still had remarkable seasons. Both Bambi and Dusty finished the season with over 100 points (120 and 111 respectively), equal 45% lead percentages, and solid jammer plus/minuses (+47 and +52). While Bambi will be available for the game, she has not skated in virtually two months and may not be her usual self. Unfortunately for the Gores, the jammer depth doesn’t extend far down the bench. This season efforts were made to advance both Draculaura and Santa Muerte into the roles, and while each had limited success, neither has the experience to anchor an offense. This is where it could get interesting for the D-VAS call ups. LowBlowPalooza gained considerable jamming experience with the D-VAS this season including a lot of track time at the recent Fresh and Furious Tournament, and recent transfer skater Getcha Kicks will make her ToRD debut (she was called up as an alternate in the last Gores’ game). The most experienced of the D-VAS skaters, Getcha has anchored an offense before, and she will be a key addition to the team and could make for an interesting story in the semifinal.

* The ToRD semifinal between the Gore-Gore Rollergirls and the Smoke City Betties will be the main event in a double header. Kicking off the evening will be a showdown between ToRD’s Death Track Dolls and the Queen City houseleague champs the Nickel City Knockouts (out of Buffalo). Doors open at 5:00 PM. The semi-final is scheduled to get underway at 8:00 PM. Tickets are available online or at a number of downtown vendors.