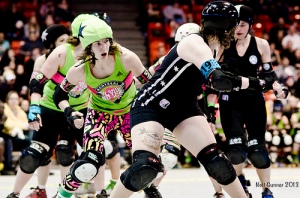 Montreal’s Iron Wench looks to get by Windy City’s Hoosier Mama in Montreal’s only loss of 2013. (Photo by Neil Gunner)

Two of Canada’s top three WFTDA teams are in action this weekend, but enter their games as underdogs, while the steadily rebuilding Thunder duel with an Eh! Team that is showing signs of finally turning the corner back into the competitive stream in a busy weekend of WFTDA action as teams tussle for position in the Division One and Two playoffs.

Coming off of a surprisingly hard-fought victory over regional rivals, CN Power, Montreal’s 17th ranked New Skids on the Block (currently 6-1 in 2013) are heading on their first California road trip to take on Bay Area and Santa Cruz this weekend. First up, the Skids are in tough against B.A.D.’s All Stars in Oakland. Currently ranked 4th in the WFTDA, Bay Area is 2-0 in 2013 including a hard fought, widely watched 29-point victory over Rose City (175-146). On Sunday Montreal will take on 62nd ranked Santa Cruz in what should be a significantly easier bout. Santa Cruz has been busy this season, compiling a 6-1 record in sanctioned play, but the highest ranked opponent they’ve defeated is the 29th ranked (and quickly tumbling) Arizona Roller Derby. 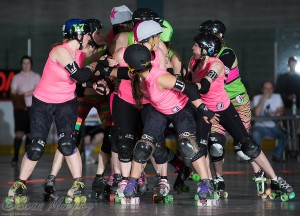 Toronto is coming off of its best game of the season (a loss to Montreal). (Photo by Sean Murphy)

49th ranked CN Power is on the road this weekend as well, heading to Ohio to take on 38th ranked Cincinnati in a critical showdown. Toronto’s CN Power, with a 3-5 record, has been somewhat inconsistent as of late (great victories or performances against Ohio Roller Girls, Queen City and Killamazoo are buffered by surprise losses to Rideau Valley and Grand Raggidy), but they are coming off of their best performance of the season against the New Skids on the Block in Montreal (a 210-121 loss) and will need the same sort of effort against Cincinnati this weekend. Cincinnati, who is holding on to one of the last Division One playoff spots) has burst put of the gates so far in 2013, compiling a 6-2 record, and they do have two common opponents with Toronto, the results of which point to a tight game this weekend: Cincinnati lost to Naptown by 147 points, while Toronto lost by 143; Cincinnati defeated Killamazoo by 109 points, while Toronto defeated Killamazoo by 94 points. It should be a great showdown, and will be streamed live online here.

Finally, the 133rd ranked Hammer City hosts 50th ranked Tri-City in a southern Ontario showdown that has the potential to shake things up considerably. The Eh! Team, once Canada’s top team, has been struggling to find its footing in the WFTDA. After starting the season 0-3, they recently picked up their first win of 2013, a 258-129 victory over Circle City. After surging up the WFTDA rankings over the past two season, the Thunder are also rebuilding in 2013 after some off-season transfers and retirements, and are 0-2 on the season suffering big losses to Montreal and Killamazoo.

WFTDA.TV has released its complete 2013 schedule and it begins this weekend with the Texas vs. Rocky Mountain showdown live from Denver. While some of the highlights include London’s game against Rose City in Portland (on June 5th as part of London’s West Coast roadtrip) and the East Coast Derby Extravaganza, WFTDA.TV has also announced that it will be covering both Division 2 playoff rounds.

While the majority of the broadcasts will be free (including the Division 2 playoffs), the same pay per view pay scale from 2012 will be in place for the Division 1 playoffs ($12 for the “regionals” and $20 for the championships or $50 for all five tournaments). There was some controversy around the pay per view model in 2013, but given the scope and quality of the broadcasts, it seems a small price to pay to watch the best roller derby the sport has to offer.

And finally, a slightly belated congratulations is in order for Moncton’s Muddy River Rollers and the Fog City Rollers out of Saint John who have officially begun their WFTDA apprenticeship.

The WFTDA recently released the names of its new batch of apprentice leagues and along with the Canadian and American teams named, the list also included teams from Argentina, Australia, England, Sweden, and Germany. Muddy River and Fog City have been leading the wave of Atlantic Canadian roller derby and finished 1-2 in last year’s RDAC Atlantic Championships. They both competed in the RDAC Championships in Edmonton this year as well.

** You can watch the Cincinnati vs. Toronto showdown here.