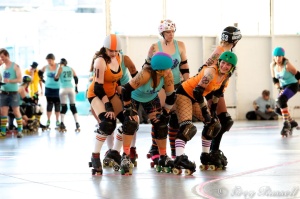 This was the third annual Clam Slam and featured skaters from 8 different leagues. (Photo by Greg Russell)

Toronto’s Pride festivities started this weekend, but before things could get underway downtown, ToRD’s 3rd annual Clam Slam kicked things off at the Hangar in Downsview Park on Thursday night. An all-queer all-star game featuring skaters from clear across North America, the bout did not disappoint, and while intricate strategies may have been too much to expect from two lineups thrown together for the event, the fans were treated to a fast-paced, hard hitting bout that often had the crowd out of their seats. In the end the ToRD-heavy lineup of the  Clam Diggers, perhaps because of the familiarity, was able to pull ahead for the 47 point win over Vagine Regime Canada.

A player very familiar to ToRD fans—former Death Track Doll standout Sista Fista—kicked things off jamming for the Diggers, taking lead jam and putting the first points on the board against ToRD rookie Snatch Bandit (AKA: Rug Burn of the Betties).  Other visiting skaters stepped it up as well, as the fleet-footed Lady Cuntessa (all the way from Yukon Roller Girls) led the push back by the Vagine Regime who kept things tight in the early going. Great individual pack work from ToRD’s BruiseBerry Pie and Tri-City’s Anita Martini along with smart pivoting from ToRD’s Rebel Rock-It allowed the Regime to keep pace, and a big pick up from Rose City’s (Portland, OR) excellent Mercy kept things tight, 30-28 at the midway point of the first half. 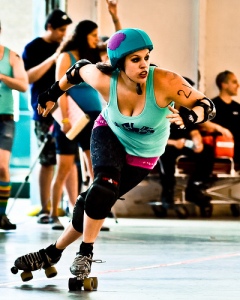 Dyna Hurtcha had a big night jamming for the Clam Diggers. (Photo by Kevin Konnyu)

Whenever the Vagine Regime threatened to take control though, the Clam Diggers stepped up. As the first half began to wane, it became clear that the Diggers’ blockers were gelling quickly and as the half wore on they began to assert their control. Strong on-track leadership from pivots Tara Part (ToRD) and Mirambo (Forest City), helped guide jammers Dyna Squirtcha and Brim Stone through the pack, and very quickly the Diggers reasserted themselves and stole back the momentum, pulling ahead 41-29. Looking to add a more physical element to the jam line, the Regime responded with BruiseBerry Pie, but there was only so much she could against the Diggers’ onslaught. Despite taking a consistent pounding from Tri-City’s Sofanda Beatin and ToRD’s Nasher the Smasher, BruiseBerry Pie managed to pick up 9 points on a late Regime power jam that kept things within reach with the Diggers up 68-47 at half.

Despite the all-star nature of the bout, the referees were calling an extremely tight game which unfortunately led to some strategic bench managing in the second half as a handful of skaters found themselves under threat of expulsion. Unfortunately, a lot of those skaters were on the Vagine Regime and this hampered their ability to make a game of it. While individuals such as the towering Mercy, the scrappy young skater Pandemic Pearl (from Tri-City’s new TKOs), and ToRD’s Brim Stone (who provided some crafting jamming) looked strong all bout, the Vagine Regime couldn’t handle the surprisingly dominant pack work of the Diggers, who threatened to pull away with it, up 87-47 only eight minutes into the half. 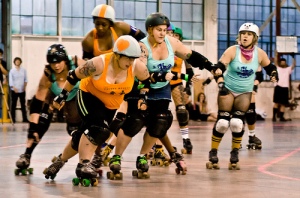 Star blocker Mega Bouche brought the fans to their feet as she jammed late in the bout. (Photo by Kevin Konnyu)

Fan favourite Mega Bouche brought the fans to their feet as she tried to respond with the star for the Regime, but a massive jammer takeout from GTAR’s blocker Newfie Bullet slowed the comeback, it nonetheless brought her team back into the bout and gave the bench some hope for a late-game comeback. A Snatch Bandit powerjam threatened even more of a comeback, only to have the devastating due of Sofanda Beatin’ and Nasher the Smasher neutralize the less-experienced jammer and force an eventual call after their penalized jammer (Slam-Her) returned to the track. With ten minutes remaining and continued dominating pack work by the likes of MTLRD’s Nameless Whorror, the Diggers had pulled ahead 121-71, and were in clear control when, eventually, the penalties caught up to the Regime, seeing both Mercy and BruiseBerry Pie (two of the more effective Vagine Regime skaters on the night) ejected for accumulation of penalties. That ended the comeback hopes for the Regime who found themselves short benched. Nonetheless, this did not dull the festive atmosphere of the event and the Regime played hard until the end, and finished on a high note with blocker Back Alley Sally jamming successfully on end-of-game powerjam to end things on a high note despite the 141-94 loss.

Despite great individual performances from the Regime, the Clam Diggers had the advantange in the packs. (Photo by Greg Russell)

Scores though, are mostly irrelevant in this event, with fun, entertaining roller derby the main goal, and in that way, this bout was, as usual for a Clam Slam, an extraordinary success. Whether it was experienced skaters from some of the top teams in WFTDA (Rose City’s Mercy, Montreal’s Nameless Whorror and Silicon Valley’s Stevie Knickers) or young skaters from home teams (ToRD’s Snatch Bandit, Fox Smoulder and Pandemic Pearl from Tri-City’s TKOs), the skaters provided top-level competition and fast-paced entertainment. And for the third year in a row, Pride was kicked off in grand style with yet another successful Clam Slam.