The Tri-City Roller Girls hosted teams from Montreal and Toronto on Saturday night in the finale of their hometeam season. It’s been a fantastic season for the skaters from Tri-City, with the Venus Fly Tramps rounding into a deep and well-rounded team, the TKOs emerging from fresh meat status to become a full-fledged competitive team and the Vicious Dishes proving that they belong near the top in the discussion of top Canadian hometeams. Of course, all of this has filtered down from the success of the Thunder, TCRG’s WFTDA travel team (who will continue their season with a bout against Killamazoo on October 15th). And in the most fitting of conclusions, both Tri-City teams were victorious in their bouts.

Tiny Dancer (TKOs) was the dominant jammer on the night, while triple threat Renny Rumble has proven to be the most game ready of the D-VAS.

Coming off of a big loss two weeks ago to Guelph’s All Stars, the D-VAS continued their all-important fall season. With ToRD’s hometeam entry draft only weeks away, this would be the last chance for these skaters to make a big impression. There were variations to the lineup for the D-VAS as Scarcasm and Babushkill made their on-track debuts. The TKOs were concluding a season of learning and development where they stood up to stiff competition at their first Beast of the East, scored a big victory over a Royal City team and played in a fantastically competitive bout against the Luscious Lunch Ladies, their fresh-team counterparts from Forest City. They were determined to come out hard in the final bout of the season and did so in front of a loud, supportive audience. 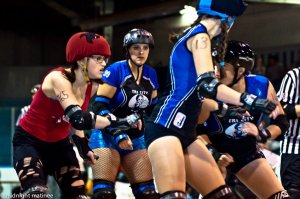 As it did in their last bout against Royal City, penalties proved debilitating for the D-VAS in the early going. Early jammer penalties to Roadside Bombshell and Laya Beaton allowed the TKOs to take advantage of power jams to pull ahead 25-5 only 7 minutes into the game. Booty Two Shoes, Ruby Shrew (who was also excellent in the pack) and Tiny Dancers paced the offense for the home team in the early going and took advantage of loose Toronto packs as well. With the score 38-5 nearing the halfway point of the opening frame, Ames to Kill (in her first action with the star) and Roadside Bombshell finally pulled off two lead jams in a row to begin a little bit of a push back for the Toronto team. Renny Rumble continued her excellent play leading up to the draft (adding jammer to her already impressive resume) and was the most effective D-VAS one-on-one. But physical play from TKOs’ Annaslaysia Killsemov  and Scorcheon kept things in check, allowing them to go into the half with a 68-26 lead.

Nonetheless, with Chicks Ahoy! bench manager Flyin’ Bryan Killman and Raunchy Hextall running the bench, it was a much more focused D-VAS team that took to the track on this night, with clearer strategies and much tighter pack work in play. But the difference in experience was evident in the later stages of the bout. Very quietly, Fox Smoulder continues to develop into a serious pack presence in Tri-City and it was only in the later stages of the game when things got looser and packs were stretched that her excellent pack work became more obvious, directing formations and frustrating D-VAS one-on-one. With penalties adding up  Laya Beaton took off the star and headed into the pack where she did some of her best work of the night, setting the tone early in the half with a sold jammer take out on Booty Two Shoes (though Laya would end up ejected late in the game). But Tiny Dancer, especially, led the jammer dominance for the TKOs on this night, often forcing calls when she didn’t get lead, and using a well-played power jam with ten minutes left in the bout to rack up 20 points and put the game away. The D-VAS stayed with it to the end and crossed the 40 point threshold on the final jam of the night when solid blocking from Mean Streak allowed Bombshell through the pack to put up the final points of the game and guaranteed that this would not be a triple-digit loss. 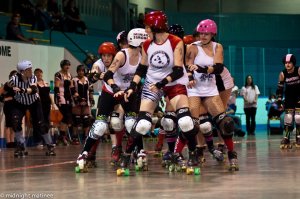 The lineup of Les Contrabanditas was barely recognizable from the one that won its first Montreal championship this past season, but with borrowed skaters from leaguemates La Racaille and a few last-minute imports from Hammer City, they were able to track a competitive roster that gave the talented Vicious Dishes a solid, competitive bout to end an impressive season that saw them play top eastern hometeams (their only full-bout loss came to Rideau Valley’s Slaughter Daughters), and have an impressive run at the Beast of the East. This victory actually gave them some measure of revenge over their Montreal opponents, who’d scored a victory over them at the aforementioned annual tournament. 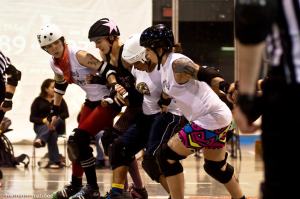 It took a while for the slap-dash Ditas to get things going and the Dishes certainly took advantage of their early organization problems. With Sexpos/La Racaille jammer Greta Bobo in the box, Team Canada’s Motorhead Molly tore up the track on the power jam to help the Dishes roar out of the gates, up 28-0 very quickly. With usual pivot Jill Standing off skates, solid blocker Stacie Jones took up extra shifts with the stripe and helped orchestrate the patented pack work of the Dishes. Actually, solid pack work from both sides was the story in the early going, as halfway through the opening period the score was a defensively sound 36-3. sin-e-star was a force once again dominating in the pack whether positionally or physically, while pivot/blocker Bareleigh Legal keeps making a case for herself as one of eastern Canada’s top one-on-one blockers. But it was a well-paced and consistent offense led by Motorhead Molly, Skate Pastor and Lippy Wrongstockings that was able to counteract a Ditas offense led by outstanding first-year skater Greta Bobo and Ti-Loup (fresh from an impressive performance for the New Skids on the Block at WFTDA’s Eastern Regional Championships last weekend). But with Hustle Rose, Mange-Moi El Cul and Beats Per Minute not dressed, the Montreal champs did not have the depth to compete offensively and found themselves staring up at an 85-14 disadvantage at the half.

Led by jammer Ti-Loup, the Ditas started to push back in the second half.

But Montreal skaters and teams are known for their resiliency and ability to bounce back , so it was never worth counting them out. There was a noticeable difference when all-Ditas lineups were out, and late in the bout the Dame of Doom – Bikini Skills – Ninja Simone trio proved up to any challenge that the Dishes threw their way. And when the Ditas started to come together late, they began to push back in a big way. Sofanda Beatin and Meg N’ Plead also donned the stripe to lead the packs for the Dishes who had to weather a storm that brewed slowly. With the score 91-41, two Dishes’ blockers in the box and the Ditas pressing, captain sin-e-star jammed in a pivotal defensive, time-wasting jam that sprung the penalized skaters and kept the Ditas at bay at an important moment in the bout. Suzy Slam had a smart game too, and the subtle forward-hip strikes from Anita Martini kept frustrating the Ditas blockers. The visitors from Montreal did end hard though, and narrowed the score considerably in the last five minutes, but when Ti-Loup lined up against Dishes’ popular blocker Stacie Jones (giving the assistant captain the opportunity to close out the game for her team), the outcome was sealed, and while the Montreal team made a big pick up to close out the game (and win the second half 66-33), it was another impressive home track victory for the Vicious Dishes to close out another impressive season.