A busy weekend in Canadian derby at all levels, from WFTDA sanctioned competition to B-team play to house league playoffs.

The final score also showing the 14-7 score of the frantic final jam (from the All Stars Facebook page; photo by Bob Ayers)

Terminal City All Stars 182 vs. Montreal’s New Skids on the Block 177

It’s been a long time coming. Forever, actually. At least in derby time.

On Saturday, May 2, 2015, Montreal Roller Derby’s New Skids on the Block lost a full-length WFTDA sanctioned game to a Canadian team for the first time in history when Vancouver’s Terminal City All Stars defeated them on a frantic last jam, 182-177, at The Big O in Eugene, Oregon.

It put an end to a streak of national dominance that I doubt we will ever see again. Although Terminal had defeated Montreal once before in a short, non-regulation game, beginning in July 2008, The Skids have been on a nearly eight-year, seventeen-game winning streak against the top teams that this country has to offer. During that time, they defeated Hammer City, Toronto, Rideau Valley, Tri-City, Oil City, Calgary and Terminal City; essentially, the cream of the crop of Canadian flat track.

Teams have been breathing down Montreal’s neck for two years now, most notably Toronto (who have 13- and 9-point losses to the Skids in that stretch) and Terminal City (who lost to them by 22 last year), and the Canadian Power Rankings crew had already shifted Terminal ahead of Montreal to kick off 2015’s rankings. But it’s one thing to do it on paper, and another to do it on the track.

Just last week in Montreal, Toronto had the Skids on the ropes for much of their game, including holding an 86-64 lead at halftime, but couldn’t hold off Montreal in the end. Similarly, Terminal City actually looked as if they were going to run away with it in the early going, amassing a lead that stretched to as much as 50 points before Montreal made it close at half, down 88-79.

A back-and-forth second half saw no team with a clear advantage and Montreal taking a two point lead into the final minute and jam. A Mel E Juana lead seemed to wrap things up, but with a scrappy Evada Peron on the track and time remaining, Mel was forced to engage and picked up a forearm penalty that allowed Terminal City to lock down the jam and outscore Montreal 14-7 for the 5-point win.

A closing 26-10 jam for Chicks Ahoy’s! Monster Muffin (aided by some monstrous pack work from the excellent line of Morton, Biggley Smallz, Rosemary’s Rabies, and Furious Georgia) concluded a strong end to what had threatened to be a slaughter in the early going.

Toronto Roller Derby’s ninth house league playoffs got underway this past weekend with three-time Battle for the Boot champs Chicks Ahoy! falling to two-time finalists the Smoke City Betties in a quarter final showdown at Ted Reeve Arena in Toronto’s east end. The Betties advance to play the defending champion Death Track Dolls in the semi final on May 23rd.

The Betties were missing key pieces this weekend—most notably in the jammer rotation—but it didn’t phase them as they continued the dominance they’d shown in the regular season meeting between these two teams. Veteran titmouse returned to the rotation on Saturday, a position she’d seemingly transitioned out of, and tore up the track for the Betties, with whom she’s skated for six seasons now, joining Smoka Cola and WhackedHer as a trio for which the Chicks had no answers (not to mention some late-gaming jamming from another long-time Betties blocker Genuine Risk). However, the difference was more in the depth of the pack, one led by another six-year vet Tushy Galore and emerging leader SewWhat?, but increasingly dependent upon the offense of LowBlowPalooza and the considerable depth bulking up the rest of the bench. 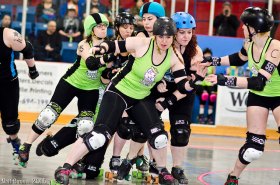 Despite the fourth straight ToRD loss of the season, strong performances across the bench indicate this Chick’s team is on the right track. (Photo by Neil Gunner)

The Betties got off to a thoroughly dominant start, and were in complete control at half, up 161-41.

The second half was a different story, however, a combination of the Betties taking their foot of the gas and the Chicks refusing to end their season without a fight. Led by retiring nine-year skater Furious Georgia (who was eventually named the team’s blocking MVP) and her aforementioned linemates, and a jamming rotation built around an increasingly confident trio of Monster Muffin, R2-Smack-U, and Wheels of Misfortune, the Chicks actually outscored the Betties in the second half 108-58.

The Betties vs. Dolls semi final will be back at The Bunker on May 23rd.

The Hammer City Eh! Team picked up its second straight win overall, but first sanctioned win, in 2015 with a thoroughly dominant 477-51 victory over their WFTDA D3 counterparts the Striking Vikings of Alliston’s Renegade Derby Dames. It was the second straight sanctioned loss to begin the season for the Vikings after a 219-104 loss to Windsor’s Border City Brawlers.

Hammer City has had an up-and-down few seasons to say the least. After challenging for a D2 playoff spot in 2013, Hammer City has been on a rough tumble since, beginning this season in 109th, outside of D2 altogether; it was a run that included nine-straight losses. But after defeating Ohio’s Gang Green 140-148 last week, the Eh! Team seems to have some swagger back: the 477 points is the most ever scored by the team in a regulation or sanctioned game.

Finally, back in Toronto, two of Canada’s top team’s B-teams faced off when the Bay Street Bruisers hosted Tri-City’s Plan B. It was the first meeting between the two and was reminiscent of some of the old Thunder-CN Power struggles.

The Bruisers got off to a hot start, but couldn’t stay much more than a step or two ahead of Plan B, leading 25-15 ten minutes into what ended up being a fast, hard-hitting and relatively low-scoring game.

Missing a few jammers allowed Murdercat! to have her busiest game with the Bruisers, teaming up with Lexi Con, Monster Muffin and titmouse (the last two doubling up after the Betties/Chicks game earlier in the evening). It was strong, full-team effort that allowed the Bruisers to control much of the play in the first half on the way to a narrow 69-65 lead.

Picking up where they left off in the first, Plan-B came out hard in the second half, led by a 19-0 jam for the jukey Crazy Squirrel who seems to have found a home in Tri-City. She was part of a diverse jammer rotation along with Aggrosaurus, Kristy Skelton and SlaughterHouse Streeter, a combination that forced constant defensive adjustments from the Bruisers. Tri City took the lead 6 minutes in and managed to hold it for nearly 15 minutes before the Bruisers retook it and held on to the end for the 166-144 lead in a thrilling first match up between these two quality B-teams.