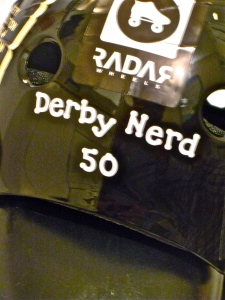 Nerd Meat: The Nerd Does Derby

I don’t have any way to back this up, but I have a feeling that this is the largest intake of fresh meat that any league in Canada has seen (just under 90), at least since those first heady days of the sport’s emergence in this country when whole leagues formed in a matter of weeks. It speaks to the cultural prevalence of the sport; the level of media saturation and pop culture awareness that exists. Even just two years ago I’d meet people all the time who had no idea roller derby was making a comeback. That’s not usually the case anymore here in Toronto. People may not have seen flat track roller derby, or know the specifics, but they usually know it’s here and happening.

The increased media prominence in Toronto is coming at a very opportune time. With ToRD on the verge of WFTDA status, the visibility of its travel team, CN Power, is only going to grow south of the border, and it seems that the Toronto media is finally catching on to the importance of CN Power in the larger world of roller derby. In the lead up to this weekend’s bout against Michigan’s Killamazoo Derby Darlins there has been front-page coverage on a major Toronto paper (The Toronto Sun) and prominent sports coverage on City TV’s evening news, all on top of the the usual media avenues. CN Power hasn’t yet drawn the sorts of crowds or inspired the sort of support that ToRD’s hometeams have, but all evidence points toward this weekend’s bout being the most successful and well attended CN Power bout ever—perhaps the travel team is finally starting to draw the sort of increased attention that it deserves.

Right along side this rise in media interest, has been the influx of interested partcipants. The reasons these women tell me they have for joining fresh meat are as varied as the body types and backgrounds. Some just thought it would be a unique “alternative” way to exercise (with the comfort of a large group of like-minded women—and a few guys); some caught a bout or two and were intrigued enough to take the next step, wanted to see if they had what it took to play; others have been watching the sport for much longer, have already skated and trained even, and know that at the end of the fresh meat the opportunity to be drafted to the D-VAS—or even directly onto one of ToRD’s hometeams—exists. These skaters gaze out at the Hangar during fresh meat sessions with a different look in their eyes. Now that they have seen the incredible crowd and felt the energy of ToRD’s season opener and are being swept up in the fervour surrounding this all star bout, they are getting even hungrier.

I won’t surprise anyone by saying that the first time I saw roller derby my life changed. I won’t surprise anyone because I wear my passion for this sport on my sleeve, but also because most people involved in flat track roller derby have had the same experience: The experience that I’ve most often heard described as “the moment.” A few skaters at Fresh Meat speak of having had this moment, and those ones—even if they can’t skate a lick right now—are hooked; it might take them a full year or even two to learn to skate, but they will; they may not be drafted for a draft or two, but they’ll persevere and end up on a roster. They may have undistinguished careers on the track, they may become superstars. But they’re in now, and they won’t get out. 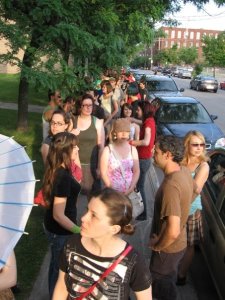 A crowd lines up outside of Arena St. Louis for a 2008 Montreal Roller Derby bout.

My moment came in Montreal on May 31st, 2008, just after Montreal Roller Derby had hosted the inaugural Beast of the East. A few friends (two women) had caught wind of the sport and had gone to check it out. Neither were athletic in the slightest, nor—as far as I knew—had any interest in sports whatsoever. I don’t think either of them even skated very much. But they’d fallen in love at first sight. We saw them at a bar and they couldn’t stop talking about it, raving about it, actually. They told us that the following weekend, two of Montreal’s home teams, Les Filles du Roi and La Racaille, were hosting B-teams from Boston, The B Party, and Charm City (Baltimore), Female Trouble. My partner and I were eventually convinced to check it out.

Montreal plays its home games in Arena St. Louis, a modest-sized arena tucked away in Montreal’s laid back Mile End neighbourhood. It’s right off of The Main—Montreal’s busiest strip—but if you weren’t looking for it, you’d never find it, probably never even know it was there. I won’t lie and claim to remember what I was expecting when I walked into the arena, but I do know that what I discovered was not what I was expecting. It was absolutely packed that night, and in those days the crowd was still predominantly women. There was cheap PBR (and Old Milwaukee when that ran out) and the spectators were quickly rowdy. I couldn’t figure out who all these people were. They didn’t look like sports fans, they looked like people you’d see at a gig at Sala Rossa down the street, not at a sporting event. But they were rabid about the game, and their affection for the women on track was extraordinarily obvious. I was so amazed by what I was seeing around me that it took me a long time to even look at what was happening on the track. 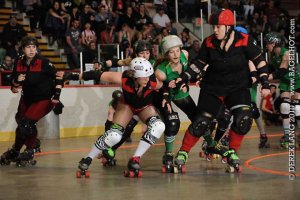 Of course, when I did turn my attention to the track, I had no idea what was going on. It was just absolute chaos to me. Up to ten women were flinging themselves around the track, seemingly haphazardly and with complete abandon. I could see the refs and hear the whistles but it was all meaningless. What I did know was that Montreal was getting beaten pretty badly in the opening bout. To my untrained eye, the teams on the track didn’t seem that different, but as much as I tried, I couldn’t figure what the American team was doing so differently. Every once in a while a particular skater would go onto the track for Montreal and the game would change, the crowd would shift expectantly. She was a small woman, wiry, but muscular. She was distinguished by the star on her helmet, and the awkward, hunched-over stride that brought her so low around the turns she could slap the floor if she wanted. It didn’t take me long to realize that whenever she was on the track Montreal’s score increased.  It gave me something to latch on to; I could match the cheers in the crowd with this skater’s ability to get through the pack, weave her way through the opposing blockers and take assists from her own. Gaining a centre point allowed me to see that within all the apparent chaos, there was a particular order to things. There were strategies, counter strategies. And no matter how out of hand the score got, we just waited for the skater with the distinctive gait to get back on the track so we could cheer. We were eventually able to read the number scrawled on her arm and checked her name in the program: Iron Wench.

The Iron Wench jams against CN Power at the 2010 Quad City Chaos.

Both Montreal teams got defeated that night, but it would mark the beginning of a journey that those skaters would take right to the highest levels of competition. The Iron Wench would become a respected star of the sport; Boston and Charm City would battle for National championships; Montreal would be the first non-US team to compete in the WFTDA playoffs: The three women I was with at that double header would all become skaters who continue to skate to this day.

I may not remember what my expectations were that night, and I certainly know that I didn’t learn that much about the sport, but I knew one thing right away, that my life had changed in a profound way.  Like so many of the people who I was skating with at fresh meat—and like so many others all over the world before them—roller derby had gotten to me: I’d had my moment.