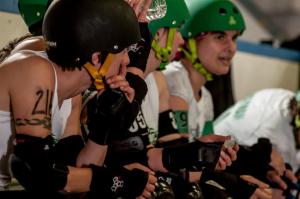 The Ohio Roller Girls came to Southern Ontario for their first ever Canadian road trip. (Photography by Joe Mac)

There has always been something incongruous about watching roller derby at the New Hamburg arena in New Hamburg , Ontario, one of the few venues used by the Tri-City Roller Girls. The town is a quaint, early 19th century community situated along the Nith River just outside of Kitchener/Waterloo. The streets are lined with old brick houses; there is a single-intersection “downtown.” The venue itself is a typical rural Canadian hockey rink of a certain era, with its wooden bleachers and creaky boards. On May 19, 2012, it also happened to be hosting a pretty intense roller derby showdown. The Ohio Roller Girls—who at 12-1 are somewhat of a “big green machine” in the WFTDA’s North Central Region this season—are playing in the first of two major WFTDA showdowns on this, their first road trip through southern Ontario. The Ohio All Stars and the Tri-City Thunder are tied at 20 about ten minutes into the first half. It’s a tense, chippy, hard-hitting and high-level bout that has only heightened the incongruity of the venue. In front of this typical (almost stereotypical) rural-Canadian backdrop there are two modern flat track roller derby teams playing the complicated game at an extremely high level, decked-out in sleek, sporty uniforms with the WFTDA logo attached prominently on the bottom right-hand corner of each team’s jerseys.

The Ohio All Stars are currently ranked 7th in the North Central region, a significant jump from 10th where they started the year. They’ve embarked on the kind of schedule (13 games so far) that will allow them to not only make the WFTDA Regional playoffs but also compete. It’s similar to the schedule they took on in 2011 just to make the Regionals (they played 16 games before the playoffs). Their opponents this weekend, Tri-City and ToRD, are comparative upstarts in the WFTDA attempting to do something that would be a rarity in the young sport: make the playoffs in only their first full year of highly competitive roller derby.

Virtually every jam of the A-team game began as a scrum start.

Ohio is an interesting model, and they have a history not unlike those of both Tri-City and ToRD. Formed in 2005, Ohio Roller Girls was originally a four-team houseleague that played a regular season, had playoffs and concluded with a championship bout. Starting in 2006 with the rise of inter-league play, the league began to shift its focus to the competitive travel team model. By 2009 they restructured the league to have “A” and “B” travel teams exclusively to allow a focus on WFTDA rankings. Both ToRD and Tri City began with the similar houseleague model. Only a year after its founding, Toronto, in 2007, embarked on an ambitious six-team houseleague that would stretch players in terms of resources and talent. Within two years, two of those first six teams were contracted from houseleague play leaving a four-team league in its stead. This was also the time when the league created CN Power, it’s eventual WFTDA travel team (following travel teams created in Montreal and Hamilton). Tri-City, which had a two-team houseleague (eventually increased to three), started the Thunder at a similar time.

Both models offer interesting contrasts. Ohio travelled this weekend with only 20 skaters to stretch over the four games they would play (two B-team and two A-team showdowns), an amazing show of endurance and game-preparedness. That togetherness is apparent against Tri-City. The Thunder are relentless in the first half, but Ohio is completely unfazed and they lead 79-48 at the break.

This is where a little disclosure is necessary: while I’m enthralled over the A-team matchup (CN Power will be facing off against this very team tomorrow in what will be its most important game of the season and perhaps in the team’s history), I’ve also become extremely nervous about the B-team showdown in Toronto. Earlier in the evening, Ohio’s B-team, Gang Green, with a roster filled out by members of the A-team, dismantled Tri-City’s Plan B (a newly formed B team playing in its second game). The final score was 248-49. The next day the team I coach, the Bay Street Bruisers, will be taking this team on in our first game ever. While the CN Power vs. Ohio showdown may be the important showdown in the present, looking forward, the development of a B team may prove to be the most important development in ToRD’s competitive future.

****Tomorrow: “Building for the Future: A Personal Reflection on Two Days of Derby (Party 2)”