Coming into Quad City Chaos 2016, three of the four teams were looking for early boosts on their way back to a WFTDA Division 1 playoff while the fourth was simply looking to make a strong impression and gauge where they stood against far more experienced opponents. Given these goals, the results were uneven.

Roller Derby Quebec’s Les Duchesses certainly left an impression, getting better as the weekend progressed: a fairly big loss to Toronto followed a narrower, more impressive, loss to Tri-City before they capped off the tournament with a win over Royal City’s Brute-Leggers. Tri-City and Toronto, meanwhile, show that they both still have some considerable work to do to return to the D1 playoffs. Given the results on the weekend, that is virtually out of reach for Toronto, who could find themselves in a battle for a D2 playoff spot come the end of the regular season.

Buffalo’s Queen City—long the little sister of the three—looks poised to return to the top division for the second year in a row and, arguably, looks better than they ever have in WFTDA play. 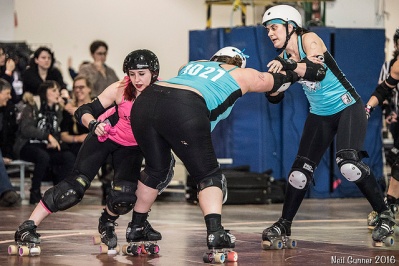 Queen City simply dominated QCC on Saturday. In the midst of a three-game losing streak to their Tri-City rivals (albeit by a combined score of 30 points), the Lake Effect Furies overwhelmed Thunder in the two teams’ opening game of the tournament. Tri-City managed to take a slim lead on the third jam of the game, before the Furies grabbed it back a jam later. By the break, they were up by 77 points. The second half saw them pull away even more and closed out strong, holding Thunder scoreless over the final eight jams on their way to the 209-71 win.

Queen City and Toronto provided a remarkably similar story. Although the Furies had ended a three-game losing streak to their Toronto rivals in last year’s playoffs (by only three points, mind you), it had been five years since their only other win against the ToRD All Stars. Also similar was the back-and-forth start: Toronto took an early lead that was quickly overcome. And once the Furies pulled ahead, they never looked back. Up by 93 points at the half, they kicked off the second with a 63-13 run on their way to a remarkable 257-96 victory, easily the largest gap between these two teams in their six-game, six-year competitive history (Toronto had won a 2012 showdown by 92 points, the previous largest gap).

Despite the loss to Queen City, rebuilding Tri-City Thunder has to feel good about the tournament. The loss to the Furies was followed by an at-times frustrating game against Quebec that they, nonetheless, managed to win by 54 points. And the team ended the tournament on the highest of notes, notching its first win against Toronto since 2010. It was the first time the teams had met since QCC 2012, with Toronto seemingly distancing itself from its southern Ontario rivals. Early in this game, it did look as if Toronto would hold Thunder off once again, but patience and persistence paid off and eventually Toronto ran into penalty trouble (a theme on the weekend), lost its leading scorer to injury (another theme) and were down 113-85 at the break. The hosts fought back early in the second, at one point pulling within three points (127-124) before Tri-City once again pulled away, controlling the game late on the way to the 49-point win and a 2-1 tournament record.

Toronto’s All Stars and Quebec’s Les Duchesses kicked off QCC 2016; the game was the best of the tournament for the hosts. (Photo by Neil Gunner)

Despite the losses to Toronto and Tri-City on Saturday, Quebec should also head home feeling very good about their tournament experience. Those two opponents represent two of the most experienced and high-ranked teams that they had ever faced (along with Montreal’s Skids last year). Then, on Sunday against Guelph’s Royal City, Les Duchesses managed to pick up its first WFTDA sanctioned win after an 0-4 start to the season. It was an impressive 189-133 win against a surprisingly undisciplined Brute-Leggers team that was hit with jammer penalty problems in particular.

Finally, for the rebuilding hosts (who lost two of their more experienced players to injuries at the last minute), it was an ultimately disappointing season-opening tournament. However, it was also an important first step in a year that could be a challenging one. The experience gained by the Toronto skaters, many of whom were playing at this level for the first time, cannot be overlooked as well (only three skaters remain on the charter roster from last year’s QCC). After this weekend, Division 1 seems like too high a hope, and the team may even be in a fight to hold on to a Division 2 playoff spot

Montreal’s smothering defense and explosive offense was far too much for the other B-teams in the tournament. Les Sexpos outscored Toronto and Queen City by a combined 590 points. (Photo by Greg Russell)

Montreal, Queen City and Toronto all squared off at the B-team level as well, with Les Sexpos, as expecting, dominating, although the level at which they dominated may have been surprising: a 272-point win over Toronto on Saturday was followed by a 318-point win over Queen City on Sunday. This is the first year for Queen City’s B-team, the Subzero Sirens, and they went winless, dropping their Sunday showdown against Toronto 244-98. Toronto’s reshaped travel-team structure has skaters doing double duty, and the bolstered B-team roster on Sunday perhaps represented the best performance by a Toronto team on the weekend (although penalties remained a noticeable issue, with five foul outs marring the team’s Saturday performance against Montreal).

There were, as to be expected a number of standout performances at QCC, including the eventual tournament MVPs. B-Team jammer MVP was the scrappy, seemingly tireless Banshee from Toronto, who is in the midst of a breakout rookie house league season as well while playing for the Chicks Ahoy!. Queen City’s Librawlian took home jammer MVP for the A-team portion of the event and deservedly so as she is emerging as one of the elite jammers in the game. Les Sexpos’ Magnum PEI was B-team blocker MVP; the powerful former New Skid was the anchor of a dominant Montreal pack. Tri-City’s AnneX was the A-Team blocker MVP: a multi-talented blocker and on-track leader who emerged as a skater to watch during last year’s playoffs was the key cog in Tri-City’s pack on the weekend.

Veteran skater Boxcar, who transferred to Toronto in the off season, was great both in the pack and with the star this weekend. (Photo by Neil Gunner)

There were, of course other stand outs as well. Quebec’s Beat’on the Quads continues to develop into a force with the jammer star. Tri-City’s Crazy Squirrel had a slow start to the tournament but by the Sunday final against Toronto was back in full flight. Before suffering an injury in the final game of the weekend, Toronto’s Beaver Mansbridge continued her 2016 emergence as a top-flight jammer. Queen City’s packs dominated all weekend and featured a number of strong performances, but Bricks Hit-house stood out in particular for her strength and persistence.

2016 is the tenth anniversary of flat track roller derby in Canada, and it’s worth noting some of the historical figures who also took part in the tournament. Remarkably, four skaters took part who can trace their careers back to that first year of Canadian derby. Montreal’s Lady J and Cheese Grater (who way back in ’06 was actually skating for Hammer City’s Steel Town Tank Girls) and Toronto’s Mia Culprit and Boxcar (who was skating for Montreal at the time) all took part in the historic Betties’ D-Day tournament in Toronto in August 2006. Boxcar, back to high-level competitive derby, was strong in the pack and eventually shifted to the jammer rotation where she had continued success.

*For complete results visit the QCC 2016 page at flattrackstats.com.

*The games were all broadcast live on Layer9.ca and simulcast on WFTDA.TV. They are all archived at layer9.ca.