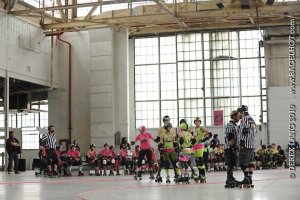 This year’s Quad City Chaos will have ramifications beyond just the excitement of the weekend’s events. With defending champion Montreal playing themselves into the discussion of the best teams in flat track roller derby, they represent the peak of a wave of Canadian teams on the verge of competing at WFTDA’s highest level: Three of those other teams will be in Toronto this weekend.

This is the second year that ToRD’s CN Power has hosted the Quad City Chaos, a four-team invitational tournament that will be played over two day’s at The Hangar, and while CN Power would like to improve on last year’s 2-1 performance, it’ll be considered a considerable victory if they manage to secure the same record. With last year’s participants Hammer City undergoing a reorganization and preparing for WFTDA play this spring, this year’s tournament will feature Eastern Canada’s other top four teams. Joining CN Power and Montreal’s New Skids on the Block will be Tri-City Thunder (who compete this season in WFTDA’s North Central Region), and the Rideau Valley Vixens who, like ToRD, are completing their apprenticeship in 2011.

Montreal was the talk of the sport entering last year’s QCC, riding a 4 bout WFTDA winning streak (their record had been 1-8 before that), including a nearly 200 point victory over their only Canadian WFTDA competition, the Hammer City Eh! Team. Predictably, they dominated the tournament with only Vancouver’s Terminal City All Stars managing to keep them under 200 points. The tournament was an eye-opener for Canada’a top teams as to what it was going to take to compete at the highest levels. Terminal City has since attained full status and will compete in WFTDA’s Western Region. While Tri-City is a member in the Eastern Region, apprentices ToRD and Rideau Valley are well on their way. 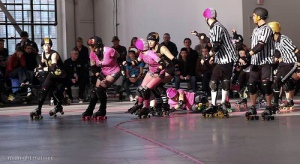 CN Power had a rough 2010. Last year’s early season successes (here at the QCC and in a rout of the newly formed Vixens) did not hold up over the course of the year, culminating in a surprisingly one-sided loss to cross-province rivals the Tri-City Thunder. Toronto Roller Derby, once a menacing force in eastern roller derby, looked disorganized and vulnerable. It was their third straight loss to teams that once would have been beatable. That loss dropped their record to 3-4 on the season.

Perhaps riding on the laurels of a popular and thriving home league, by the end of 2010, the travel team had become neglected. With an ever-changing roster that failed to gel as a singular entity, it was losing ground on the quickly evolving leagues around it. The loss in New Hamburg seemed to galvanize ToRD, and what resulted was a much more organized and considered approach to the formation and training of CN Power. With the first set roster in its history and a much more regimented and disciplined training schedule, the hopes were high to kick off 2011. Facing an unknown entity in their season debut—North Central Region’s Killamazoo Derby Darlins—CN Power came out calm, prepared and focused and played one of the best bouts of the team’s young history on their way to a 197-35 victory. 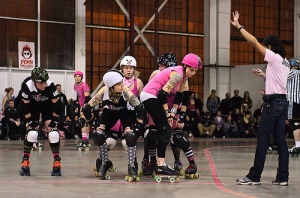 Cn Power kicked off 2011 with a 197-35 victory over the Killamazoo Derby Darlins. (photo by Kevin Konnyu)

More important even than the victory, was the way the team played. It was a nearly textbook bout; CN Power was simple and straightforward in its strategic play, and its best players played like its best players. All three of the lead jammers, Land Shark, Candy Crossbones and Dust Bunny look to be in mid-season form already and have played extremely well for their respective hometeams as well. The pack is  led by Brim Stone, Mega Bouche, Rebel Rock-It and Tara  Part, while Nasher the Smasher, Lady Gagya and Jubilee put up big numbers in the pack in CN Power’s season opener.

As it was last year, outside of the bouts involving Montreal, expect all of the matchups to result in hard-fought bouts that could go either way. That being said, Toronto is hoping for a victory against Rideau Valley to kick things off in preparation for the tough bout later in the day against Montreal (that will be Saturday night’s prime time bout, opening whistle at 7:00 p.m.). But the real focus will be on Sunday’s rematch with the Tri-City Thunder. With both teams entering WFTDA’s North Central, these teams are going to be rivals for a long time to come. CN Power is hoping to show that it can keep up with the hard-working all stars from Tri-City, and a victory here would go a long way in erasing the heart-breaking memories of last year’s late-season loss. 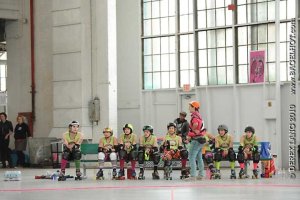 New Skids bench at QCC 2010, where they had an average margin of victory of 157 points over the three bouts. (photo by Derek Lang)

Seemingly, not much has changed from a year ago. Montreal is still the team everyone is talking about, and they are once again on an amazing 5-1 run  to start 2011 with the only loss coming in the third bout in three days on a west coast road trip with a less than full roster against the 2nd ranked team in the world. But as much as everything seems the same, a lot has actually changed. Last year Montreal was making waves at the back of the pack, eventually going on a seven bout winning streak to climb all the way to 6th in WFTDA’s Eastern Region (they would defeat their opponents by an average of just under 100 points each during the run). That run up the rankings would come to an end at the hands of arch rival Boston Derby Dames. Boston would also knock the Skids out of WFTDA’s Eastern Regionals in the quarterfinals (they were the first non-American team to qualify for the playoffs), putting an end to an amazing 2010 that saw the Skids compile an 11-5 record in WFTDA sanctioned bouts (13-5 overall). 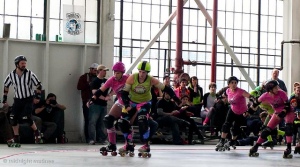 Less than a year later and Boston is just one of the teams that has been upset by the New Skids on the Block in 2011 as they reach for even higher levels. If wins over Rat City, Boston and Jet City weren’t enough to convince any remaining skeptics of Montreal’s potential to compete this season, their recent smackdown of New Hampshire (a game that saw Montreal become just the fourth team to lay down 400+ points in a sanctioned bout) should put to rest any questions of what, at its best, this team is capable of. With a relentless offense anchored by the seemingly inexhaustible Iron Wench (and complemented by Georgia W. Tush and Ewan Wotarmy), and a smothering defense led by pivot Jess Bandit, the Skids are realistically unbeatable by any team in Canada right now. This is an extremely deep squad, with triple threats (Cheese Grater and Smack Daddy), fantastic back-up jammers (Lil Mama, Lyn-Dah Kicks and Mange Moi El-cul), positional mavens (Lady J, No Holds Bard, Rae Volver), and big hitters (Nameless Whorror, Trash N Smash and Bone Machine), but the true strength of this team is the depth of its talent, and the unity of its pack work. 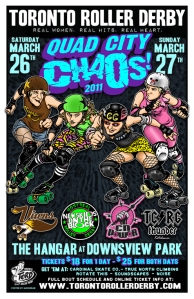 Quad City Chaos will be held on March 26th and 27th at ToRD's Hangar in Downsview Park.

Not only is Montreal extraordinarily talented, they have the most track time clocked in 2011 as well, and are riding a wave of momentum built on a series of tough victories against some of the best competition flat track roller derby has to offer (and they’ve scored a staggering 710 points in their last two games). Expect them to roll right through the QCC, as they did last year, on their way to the “Anarchy in the UK” tournament in London, England in April. The Skids have never faced either the Thunder or the Vixens, but Montreal’s B-team, the Sexpos, recorded victories over each in 2010. The last time the Skids faced CN Power was at QCC 2010, a one-sided victory to close out the tourney.

**Tickets are available online or at various ticket outlets in Toronto. Doors on both days open at 1:00pm. For a full schedule, check here.

**Tomorrow, the preview continues with Tri-City and Rideau Valley.