Nerd Meat: The Nerd Does Derby

It’s the opening bout of a key tournament and ToRD’s fresh meat team, the D-VAS, is lining up to play Queen City’s Baby Brawlers, the fresh meat team from this venerable Buffalo league; it is a big showdown between the youngest members of two very experienced flat track roller derby leagues. In deference to Queen City’s reputation and history, the D-VAS have tracked a comparatively “veteran” lineup of skaters from ToRD’s second-last fresh meat in-take. But in the midst of these skaters is one, #747 Ames to Kill, who is the freshest of fresh meat. She just completed her minimum skills test a few weeks before after completing the ten week fresh meat program. She looks focused playing in the pack, any fears—those nerves that have got to be there—are well-hidden. She looks like just another D-VAS. 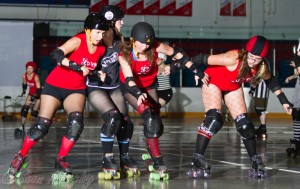 The 2 Fresh 2 Furious tournament (hosted by the GTA Rollergirls) is a showcase for new leagues and fresh meat teams of established leagues that has become an annual event in Toronto, and it fills a great need. With well over twenty leagues and counting, Ontario may be one of the fastest growing regions of flat track derby in the world right now. The growth of the sport in Ontario is reflected in the growth of the sport in Toronto, and ToRD is booming: right now the D-VAS have a roster of over 30, all at various stages of development, but all eligible for the 2011 draft that will be held at the end of the year (needless to say, they won’t all be drafted—ToRD has become too big and too competitive for that, but with the advent of the D-VAS, they will still get to play and hone their skills). Over the course of the 2 Fresh tournament, eight of the skaters with whom I’d graduated from the fresh meat program would play (Along with Ames, Slaptrick Swayze, Lexi Con,  BelleFast, General Patten, Smack Mia Round, Purple Pain and Zom-Boney would all get track time). The D-VAS would go on to finish second, losing in the final to the Gold Miners’ Daughters, a talented team from Timmins who came out of nowhere to record the victory.

It was hard for me not to become reflective during the course of the tournament. Along with the connection I felt for the D-VAS, my sister was also playing for Durham Region Roller Derby (Hitz Miller) who also had a successful tournament, and were the only team that beat the eventual champs (albeit early in the tournament in a non-elimination bout). But it was also hard not to see, out of this microcosm, the larger picture that it played into. This tournament, for instance, and other freshie bouts and tournaments around the world represent the ever-strengthening foundation of this sport’s revolution. Along with MMA, roller derby truly is the sport of the 21st century. In terms of participation, its growth far outstrips that of any other sport being played on the planet (in 2003 there were about five active flat track leagues in only one country, eight years later and there are well over 900 in about two dozen countries). And as much as the sport has grown, it has changed continuously as well: the tens of thousands of current participants in the sport are all active members in its evolution. Eight years ago the teams that were playing were all competing at a fairly similar level as well. Now, the game being played at 2 Fresh 2 Furious (as watchable and exciting as it is) is nowhere the level of game being played at the WFTDA Championships.

While evidence of the beginnings of track strategies and isolation plays could be seen during the tournament, the level of play was at a fairly basic level (for the most part, the most advanced teams strategically, were those that did the best). The Gold Miner’s Daughters won the tournament playing a very basic style of roller derby, what I’ve come to call the “hit and run” game that defined the fast-paced action of banked track roller derby and was the default mode for the early flat trackers as well. It relies on fantastic individual talent (especially the jammers), and strong endurance. While there aren’t really any exclusive hit and run teams left at the highest levels of competitive flat track roller derby, some, including the extraordinarily talented Oly Rollers, still play a fairly simplistic style of derby that is fast and hits hard. There are others too, like Chicago’s Windy City Rollers,  who still play the fast game. The obvious drawback to this strategy is that if you run into a team of players who are better skaters than you, you’re in trouble. This was most evident for me when Philly’s Liberty Belles, who can play the fast game when necessary, took on Oly in the semifinal at the 2010 WFTDA Champs. The fastest bout of the tournament, the score remained close early on as Philly did their best to keep up with the Rollers, but despite how close the score was at half,  52-34 Oly, the game seemed all but over by then: It was clear that in a fast-paced, hit and run bout, Oly wasn’t going to be caught. And they weren’t, with their lead barely changing throughout another fast second half. When Oly was finally taken out by Rocky Mountain in the final, it was by a smart, strategic team that understood the key to victory against Oly was not trying to outduel them in a race: the key was playing a diversified, multi-paced bout that would draw Oly away from its strengths.

ToRD TV caught up with Jerry Seltzer at the 2010 WFTDA Championships.

But this, along with many aspects of derby, is debatable: flat vs. banked; mainstream vs. underground; men vs. women vs. everyone. I believe that when all is said and done, there will be derby for everyone at every level, on whatever surface. But right now with the community—as large as it is—still so interwoven, there are a lot of developmental debates. Jerry Seltzer, one of the founding fathers of the sport (his father, Leo, created the sport in the 1930s), and Commissioner from 1959 to its original demise in 1973, is still a central figure in the debates. While Jerry openly and freely offers invaluable advice and support on his blog and his insights are often inspired (and inspiring), I believe he’s missing the mark on at least two major points: the importance of television in Derby’s perpetuation¹, and the fact that the banked game is better than the flat one.

Eight of the Nerd's fellow fresh meat graduates suited up for the D-VAS at the 2 Fresh tournament. (Photo by Sean Murphy)

I don’t like this valuing of the banked over the flat (or vice versa, for that matter), and I also think that it is a waste of time: they are no longer the same sport.  When historians look back upon flat track history, I believe they will mark the year of the true birth of flat track roller derby as 2009. This is when the players of the sport began to exploit the advantages of playing roller derby on a flat track as opposed to a banked one; this is when the sport of flat track roller derby was no longer interchangeable with its banked-track progenitor.² It’s no secret that I prefer flat track over banked track because of the democratization of it, because of the inherent strategy involved in manipulating the pace at which the game can be played. It is not a perfect sport yet (what sport is?), but WFTDA seems to be on the right track in developing it (currently, they are experimenting with eliminating minors, another necessary step in flat track’s evolution). While I do hope that banked track continues to be played (perhaps with the flat track elements that have crept into it removed), my heart is on the flat track, where it will stay.

Despite completing Fresh Meat, I’m not that interested in playing the sport at any competitive level and am content, right now, to chronicle the growth of the women’s version of it; for me, watching the newest D-VAS in the 2 Fresh tournament was as close as I’ll come to playing on a team. Having spent ten-weeks sweating and struggling on the track with them, from first skate to minimum skills test,  I’ve watched each of those skaters closely; I’ve seen them progress from early jitters and confusion over the game, to the confident skaters on the track they’ve become. On top of that, I also feel that now that I am writing about them playing in a game—having read their names on the backs of their uniforms, seen their focus and balance increase with each jam—I have truly come full circle in my own fresh meat journey; I’ve come through the other side full of the same desire to fulfill the same role I’ve always filled—chronicling the early days of this amazing sport. Now I am just armed with an even greater appreciation for not only  the game itself, but for the larger role it plays in the lives of its participants.

That, as simple an admission as it sounds, has been my greatest achievement in this whole process.