CN Power finished atop the standings at the third Quad City Chaos for the first time in the tournament’s brief history, and after two years of Montreal dominance (they had an average margin of victory of 250 points at last year’s tournament), things were much tighter this year: For the first time more than one team finished with a positive plus minus (only Montreal has done so in the past). Although the competitive level was closer, there was still an element of competitive separation between the clubs, with the Eh! Team falling to a -887 point differential (though comparatively, they had the least experienced lineup and as such, showed immense real-time progress all weekend).

The participants of the 2012 Quad City Chaos. (Photo by Joe Mac)

But this tournament has never fully been about the competition (although this year’s addition showed that the event is certainly moving that way), and instead has provided an opportunity for some of Canada’s top travel teams to get together early in the year to help push each other forward. This year, the Vixens seemed to be the team that gained the most, showing huge strides over last year’s showing (and almost pulling off a big upset over Tri-City). They showed that they are clearly a team that should be followed, and proved that they are not that far from the top. And while in the end the battle of Ontario predictably came down to the Thunder and CN Power  (with CN Power improving to 2-1 against them in the battle for provincial supremacy), it’s not hard to imagine a QCC in the not-too-distant future where all the teams are on the same competitive level. 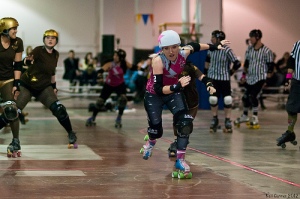 One thing that has paced CN Power ahead of the crowd is its explosive offense, anchored by the depth of its jammer rotation. With an impressive (and diverse) core rotation of Defecaitlin, Bambi and Candy Crossbones, CN Power was hard to keep off the board with any regularity; in the pack Tara Part and Nasher the Smasher continue to provide solid leadership and consistent play.  For the second place Thunder, Bareleigh Legal and sin-e-star continue to offer a frighteningly efficient and consistent blocking duo; they are intense competitors (Bareleigh sometimes lets that intensity get the best of her) with a ferocious desire to win that drives the Thunder. The offense remains anchored by Motorhead Molly who has been a pillar of stability as the Tri-City rotation has gone through some changes over the past year.

The Vixens Semi Precious was dominant as usual (laying a hit on the Thunder’s Konky). (Photo by Greg Russell)

The Vixens continue to be led on the track by the extraordinary Semi Precious; she is a smart player who plays a simple, no nonsense brand of flat track roller derby: strong positionally, accurate and efficient with hits, and a recycling machine, Semi Precious (a member of team Canada) remains one of this country’s premier players of the sport. The Vixens have faced many changes over the years, but having Soul Rekker and Dee Dee Tee wearing the star remains the same. Dee Dee Tee especially stepped it up this weekend, showing a tenacity and fight that only seems to grow with time. Finally, on an Eh! Team full of fresh faces, Bitchslap Barbie and Mean Little Mama remain at the centre of it all. Versatile players both, Mama leads on the track with her ferocity while Barbie, the team captain, remains the motivator, seemingly unfazed in the face of great deficits. 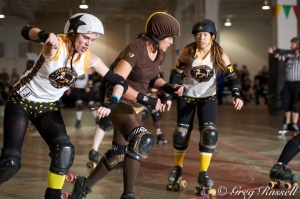 While it would be easy to say that the whole Vixens team stepped up its game, that charge is clearly being led by Margaret Choke. Always a reliable presence, Choke has elevated her game to a new level in 2012 playing with a confidence that is making her another on-track leader for this team. Offensively and defensively, her timely hits and strong positional play make her an all-around pack threat. The Eh! Team, so short on experience, is another teams full of skaters who have no choice but to step it up. But in terms of reliability and consistency, Lorazeslam  and Whacks Poetic, really stepped it up this weekend. Lorazeslam is a scrappy jammer who has that key jammer ability to just keep going and going (and brings that fire to blocking as well), while Whacks Poetic has become a calm and stabilizing pivot. They will both be vital to the redevelopment of this team.

Tri-City Thunder’s Sofanda Beatin’ has upped her game in a big way this year as well. A lack of pack depth (or drop off between lines) has been an issue with the Thunder in the past, but Sofanda has shown that these gaps can be filled from within. Always a strong hitter and threat on her line, her athleticism and track sense have both leapt to a new level this year and she was an intimidating presence on the track all weekend. Similarly, CN Power’s Aston Martini has always been a strong skater and solid blocker, but she brought her A-game to the QCC  and was a game changer in many ways. A quiet but consistent blocker (a big part of her effectiveness is drawn from her footwork),  Aston showed a certain fire and swagger this weekend that has been lacking from her game at this level, and that now awoken could make her a frightening new piece of the CN Power puzzle. 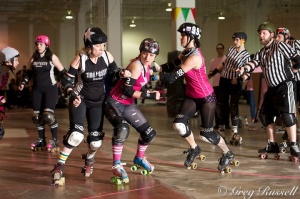 Thunder rookie Ova’Kill jammed like a veteran all weekend. (Photo by Greg Russell)

The biggest individual story of the weekend may have been the revelation of rookie Thunder jammer Ova’Kill. In her first half of play ever, she put 50 points on the board against the Eh! Team, and rode that confidence-building debut all the way through the tournament. With a couple key jammers having retired over the past year, she will undoubtedly become an essential piece of the Thunder offense (and seems ready for that role already). The Vixens had breakout players all over the track, but two that consistently stood out were Mudblood and Tarantulove. While Tarantulove is a newer skater who, like Ova’Kill, has immediately taken to jamming, Mudblood has been evolving into a triple threat with the Riot Squad for a while now. Starring with the Rideau Valley Vermin at last year’s CWRDA (now RDAC) Eastern Championship, Mudblood has brought her game up a notch with the Vixens.

The Eh! Team is full of potential, with a whole roster of exciting young skaters. Two players who really stepped up their games this weekend though were Zoe Disco and Oh Henry. Both have a year of experience under their belts now and have begun to mature into reliable players (though track awareness  takes time and experience). Although the Eh! Team had a rough weekend, competitively, they have a good, young stable of skaters around which to build this team. They all gained invaluable experience this weekend.

***All the WFTDA action was streamed live on Canuck Derby TV. Check the archives if you missed it. The non-sanctioned games will be available on Layer 9.

***Next up for the CN Power is an April 14th home date with Queen City’s Lake Effect Furies (Buffalo); the Vixens will be visiting New Hampshire Roller Derby on the same night; The Eh! Team will kick off its home season on May 12th against Roc City, while the Thunder will head to Grand Rapids on the same night.