The 6th Beast of the East happens to fall on the 10th anniversary of the first official flat track roller derby game.

In derby time, it’s been forever.

In derby time, it’s been eons since flat track roller derby first took shape. There have been massive, glacial shifts in the attitude of the sport, in the collective goals and aspirations of its participants. There have been evolutionary developments in the game itself, as flat track roller derby has gone from being a secondary offshoot of a dying sport to the dominant style of play in the fastest growing game in the world; its gone from being a DIY feminist-punk movement to a globally competitive sport.

On April 27th, 2003, the first official game of flat track roller derby was played. The roots of the sport, of course, run deep and date all the way back to the 1930s and even earlier, but on that Saturday in Austin, Texas, The Texas Rollergirls committed to the flat track and kicked off their inaugural season by blowing the opening whistle on the ruleset that would eventually form the basis of the WFTDA rules that we play under today.

It seems fitting somehow, that the opening day of the 6th annual Beast of the East falls on the historic 10th anniversary of this seminal event. Montreal Roller Derby’s Beast of the East is the original tournament in Canadian roller derby, and is the last major tournament in the sport that features house league teams exclusively. Its importance in the development of roller derby in this country, and in its continued celebration of both the spirit and the sport of the game, cannot be denied.

Forest City’s Thames Fatales (6th appearance) and Luscious Lunch Ladies (1st) will both be appearing at the Beast. (Photo by Derek Lang)

Two days, sixteen teams, twenty-eight games, eastern Canadian house league domination on the line. Of the participants, eight of the teams have participated in every single BOE tournament since 2008 (Forest City’s Thames Fatales join the four ToRD and three MTLRD teams as original participants), while the Derby Debutantes (GTAR), the defending champion Vicious Dishes (TCRG) and 2011 champs the Slaughter Daughters have been involved since 2009. After a year off, both RVRG’s the Riot Squad (third appearance) and TCRG’s Total Knock-Outs (second) return to the tournament representing house leagues whose other representatives have won the last two events.

Finally, three teams will be making their debuts, but all three play in leagues that have strong ties to the tournament. Roller Derby Quebec has been represented in the last two tournaments by Les Duchesses, which is now a travel team supported by two house teams, Les Casse-Gueules and Le Rouge et Gores, who will both be making their tournament debuts. The Luscious Lunch Ladies will also be debuting, representing London, Ontario’s, Forest City Derby Girls. This is actually the third London team to play in the Beast after the now defunct London Thrashers accompanied the Thames Fatales in 2008. 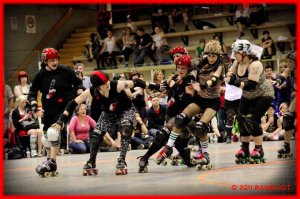 The Slaughter Daughters defeated the Gore-Gore Rollergirls in the 2011 final and are the favourites heading in to the tournament. (Photo by Derek Lang)

In the first three years of the tournament, Montreal Roller Derby dominated, placing all three of the league’s teams in the final four. Then, as the roster of Canada’s top team, the New Skids on the Block, left those teams, the field suddenly opened up. In 2011, while Rideau Valley’s Slaughter Daughters would win the wildest final in tournament history (watch the final jam here), this edition of the event was dominated by ToRD, whose teams finished in the second through fourth place spots. Last year there was true parity finally, as the final four teams would represent four different leagues with the defending champion Slaughter Daughters figuring prominently once again, falling in the final to the Vicious Dishes.  That Daughters team would follow MTLRD’s La Racaille as the only team to reach back-to-back finals. La Racaille actually qualified for the first three finals of the tournament’s history (2008-2010, winning in 2009), a feat that the Daughters could—and should—match in 2013.

However, the bigger story of the tournament could be the return of Montreal as a house league power. This is the third year of the house league’s rebuild and after the decimation of the 2011, they fared well last year with all three teams making it to the quarterfinals, and La Racaille finishing in the fourth spot.  With La Racaille winning MTLRD’s preseason round robin tournament, look for them to lead the charge, facing potential challenges along the route from Tri-City’s TKOs and ToRD’s Death Track Dolls. Montreal could easily send three teams back to the final four for the first time in two years.

La Racaille won MTLRD’s preseason round robin tournament and could lead a Montreal return to power at the Beast. (Recap photography by Sean Murphy)

ToRD could face the same drop off this season as Montreal did in 2011. With the majority of CN Power skaters now playing exclusively for that team, the ToRD house league teams are rebuilding. Chicks Ahoy! who’ve been power houses in the last two tournaments (4th and 3rd place finishes) were the most affected and could be done on day one (although a favourable draw and some strong play could seen them sneak into a Sunday matchup against the Daughters); the Gore-Gore Rollergirls also could be done early, the victims of a tough draw that will see them open against the Slaughter Daughters. Look for the Death Track Dolls and 2012 quarterfinalists the Smoke City Betties to carry the torch for Toronto and should both score final eight spots.

Speaking of change, last year’s champs the Vicious Dishes have gone through a massive roster change up and recently lost to the TKOs in an interleague showdown, showing that they may not be ready to defend their title, and that the TKOs could be the team to watch from Tri-City, and should make it to the quarterfinals. With the Quebec teams lacking experience, Thames Fatales and the Lunch Ladies rebuilding, the story of this tournament should once again be the Slaughter Daughters. Boasting a number of skaters from the travel team Vixens, the Daughters are poised to join the 2008-2010 La Racaille as the only teams to reach three straight finals (actually, don’t be surprised to see these teams face off against each other in the final)

On that historic night ten years ago in Austin, two of the sport’s first housleague teams, the Hotrod Honeys and Honky Tonk Heartbreakers took to the track for the initial game of flat track roller derby. Thousands of kilometres away and ten years after the fact, Rideau Valley’s Riot Squad and ToRD’s Chicks Ahoy! will kick off the Beast of the East and carry on a tradition that though still young, has come a long way in a short period of time.

* On Friday night, ToRD’s CN Power will take on MTLRD’s New Skids on the Block in a WFTDA showdown.

* Catch up on the history of the Beast of the East here.