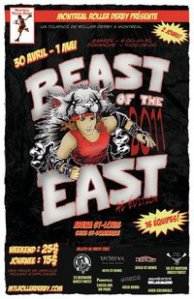 This is the fourth edition of the important tournament.

Although the role of the Beast of the East tournament has shifted over the years, its value, and its importance in the development of a stable, sustainable Canadian roller derby community is undeniable. More and more the shift in focus in roller derby in general is toward the travel teams: the teams striving to compete at WFTDA’s highest level. All over North America the growing trend is for more travel-team based tournaments as a way in which to get a handful of sanctioned bouts done in a short period of time (necessitated by the realities of travel expenses, scheduling and the other trivialities that get in the way of a rollergirl’s derby life). So to have a tournament devoted solely to hometeams is becoming an increasing rarity; it also casts an aura of levity around the event: it becomes as much about a celebration of the sport than anything else. But that’s not to imply that teams don’t want to win (they do), and certainly there is a particular expectation in the air this year, as the recalibration of the Montreal Roller Derby League means that its new-look hometeams will not be as formidable a juggernaut as they have been in the history of this tournament, and certainly were last year.

In the beginning the Beast was an opportunity to learn the sport, both on and off the track. On the Friday before the inaugural 2008 tournament, the participants gathered for a viewing of Hell on Wheels, the documentary that tracks roller derby’s revival at the turn of the millennium, and inadvertently the birth of the flat track version of the sport. By 2010, when all three of Montreal’s hometeams completely dominated the tournament, the Beast had become an opportunity for Montreal to introduce the ever-evolving strategies of the sport that they’d learned toiling at the front lines of roller derby’s highest competitive levels. There was a distinct culture shift last year: it became evident that to remain competitive at flat track roller derby, it was necessary to reach for a higher level of physical training and strategic consideration.

One year later, it will be fascinating to see how the teams have adapted; which teams accepted the formidable challenge and have stepped up their games.

Hammer City's absence will be felt (The Death Row Dames were quarterfinalists in 2010). (Photo by Derek Lang)

The noticeable absence this year is Hammer City. Three HCRG teams have played in the Beast of the East, with the Harlots winning the first BOE in 2008, and even last year they were a serious presence as the Death Row Dames went on a spirited run to the quarterfinals. The league has refocused, and reshaped with a clearer focus on travel teams (word on the track is that the historic Harlots will be retained as a B-Team). Nevertheless, 13 teams will be returning from last year including six of the eight teams from the quarterfinals (Vermont’s Green Mountain Derby Dames are the other absent quarterfinalists). Three new teams will be debuting including fresh league additions in GTA (The Chrome Mollys) and Tri-City (The Total Knock Outs), while the newly formed Les Duchesses de Quebec will be making their bouting debut. 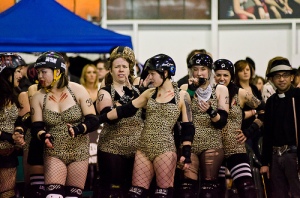 ToRD's Gore-Gore Rollergirls have been the top non-Montreal team for the last two years; this could be their opportunity. (Photo by Kevin Konnyu)

The biggest change in competition comes through Montreal’s realignment. All three of Montreal’s teams have qualified for the semifinals in every tournament (a run that has included all-Montreal finals in the last two tournaments, won by La Racaille and Les Filles du Roi respectively), but this year with the top fourteen players being lifted from their hometeams to play exclusively with the New Skids in the Block, there will obviously be some growing pains for the Montreal teams (only one team, La Racaille, has played with its new roster, scoring a 60 point victory over the GTA’s Derby Debutantes). This opens the window for a handful of teams who have the experience and depth to do very well in 2011 including ToRD’s Gore-Gore Rollergirls, Tri-City’s Vicious Dishes, and Rideau Valley’s Slaughter Daughters. While the Montreal teams remain largely mysterious, they have all retained an important core and shouldn’t be counted out; on paper anyway, Les Contrabanditas look to be most dangerous as they retain seven skaters from last season’s impressive team and picked up two more vets in the off season (Beats Per Minute from Les Filles du Roi, and Low Dive Jenny from La Racaille).

The timing and nature of this tournament make predicting what will happen tricky. A team could potentially play up to six bouts over the course of the weekend which means that energy conservation and roster juggling become important aspects of the game. Also, the 20 minute mini-bouts mean that often anything can happen: a good power-jam could be the difference, and teams that take longer to warm up could be at an obvious disadvantage. On top of this, there are also differences in the amount of track time these teams have had as well, with the ToRD teams potentially already rounding into mid-season form.

Only the opening match ups in the double elimination round are set, with paths getting complicated after that. While it doesn’t appear that there will be any major upsets, there are a few intriguing pairings. At the top of the list is the Gore-Gore Rollergirls vs. Vicious Dishes bout. Either of these teams are capable of winning this tournament, and if all goes as predicted may even cross paths again in the semi-finals (regardless of who wins this one). The Smoke City Betties and Thames Fatales game could also be an entertaining one, with both teams already having some bouts under their belts this year (and the Betties improving quickly). Finally the Death Track Dolls vs. Les Filles du Roi bout could be surprising. Les Filles (the defending champs) lost a lot of skaters to the Skids realignment and look like they will be tracking a very inexperienced team: because of that, there could be an upset up the Dolls’ sleeve. The harsh reality is, is that one win is not enough and half of the teams will be done by Saturday night. 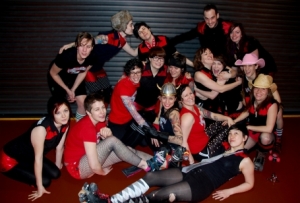 This could finally be the year Les Contrabanditas rise to the top in MTLRD.

While Montreal may not have the dominant squads they once did, I still think all three teams will make it through to the quarterfinals, joined by three ToRD teams (The Gores, Chicks Ahoy! and Death Track Dolls), the Vicious Dishes and the Slaughter Daughters. Unfortunately for the hosts, I think the round of 8 will mark the end of the road for two-time finalists and ’09 champs La Racaille and the defending champion Les Filles du Roi, with the final four being the Dishes, Gores, Ditas and Daughters. I honestly think anything could happen between these four teams, but it would be nice to see the Gores (or Dishes) and Daughters meet in the final to truly bring an end to Montreal’s dominance. In both 2009 and 2010, the Gores were clearly the top team outside of MTLRD, and this could finally be the opportunity they need. The Ditas, though, who always seemed a step behind one of their Montreal counterparts will be extremely motivated to finally break through and win this.

Whoever manages to prevail, to be capable of pulling it off nothing less than a monumental effort will be required.

be in Montreal on the weekend, no need to worry! For the second-year in a row, all of the action will be boutcast live on Canuck Derby TV beginning at 8:00 AM (eastern) and running straight through until a champion is crowned on Sunday.