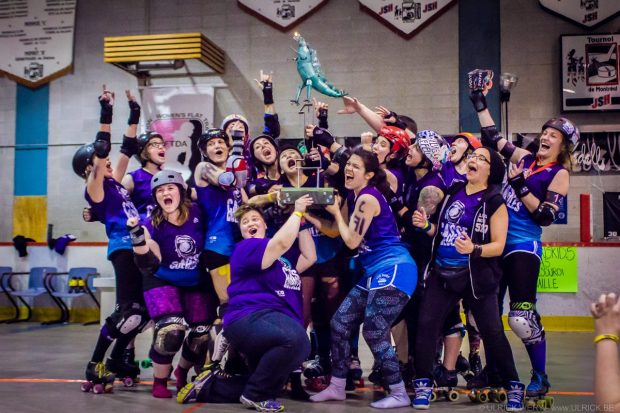 Only moments had passed since Les Filles du Roi’s unlikely last-jam comeback in the third place game of the 2015 Beast of the East and Arena St. Louis was still abuzz. The raw emotion generated by the sole remaining host team in the tournament coming back mightily against a former champion had threatened to blow the roof off the place. The roar of the partisan crowd lingered.

In the upper reaches of the stands, first-time attendee and Kingston Derby Girl announcer Dr. Sneaks was standing dumbfounded, glowing from the emotion, taking long sweeping glances to reel it all in. He had that look in his eye that only a first-timer truly has; it’s that look that people get when in they are wrapped up in the early throes of a new love.

After taking a moment to gather himself, he turned to me and said without hesitation, “I’m never missing another Beast of the East.”

It’s a moment that has happened countless times in the eight-year history of what, many argue, remains flat track roller derby’s greatest weekend of the year. There is just something about it: maybe it’s the downtownish venue, the raucous crowd, the cheap PBR, or maybe just the city of Montreal itself, but the Beast of the East is like the beating heart of the flat track roller derby in this country and every year offers something amazing.

While this year’s version of the tournament didn’t have the across-the-board parity of last year’s, what the 2015 Beast did have in abundance was engrossing narratives. It was a tournament of stories.

Storyline #1: The Rise of the Roller Derby Quebec

This is actually a story that has been playing out over the past three Beasts (and really, since 2011 when the league debuted), but this year the narrative reached its dramatic conclusion. It was the first time since 2010 that two teams from the same league faced off in the final (Montreal did it two years in a row from ‘09-10), and eventual champions Casse-Gueules joined La Racaille (2008-2010) and the Slaughter Daughters (2011-2013) as the only teams to reach consecutive finals.

Two years ago, the Rouge et Gore shocked the tournament, first by setting a scoring record (159 points—a record that was broken this weekend) and then by advancing to the quarterfinals. Not to be outdone, their leaguemates did one better last year by advancing all the way to the final, losing in a heartbreaker. But this year, both teams stole the show.

The Casse-Gueules started slowly (as they did last year), but eventually got rolling, including eliminating the team that had defeated them the year previously (the Gore-Gore Rollergirls) in a low-scoring, yet still fairly one–sided game (55-25) before putting together a truly dominant quarterfinal win and eventually holding off their surging sisters in the final. The Rouge et Gore also saved their best for the later stages of the tournament playing their most complete game in a dominant semifinal win over the Slaughter Daughters (84-10).

Their final was a thrilling one, with Casse pulling away early and holding on in the end for the 161-142 win (the Rouge et Gore outscored them in the second half 84-61).

How this all translates to Roller Derby Quebec’s travel-team season will be remarkable to watch.

It’s so predictable by now that no one should be surprised when a team comes from out of nowhere and goes on a spirited run. In its somewhat fractious history, Kingston Derby Girls have had to deal with division (there was a second Kingston league in the early going) and debates over direction, but they have remained a strong league in spite of it all. Their travel team Disloyalists have been up and down over the years, but if the strength of this Skateful Dead home team is any indication, things seems to be improving from the ground on up.

After a one-sided trouncing at the hands of Rouge et Gore in their opener, you’d be excused for thinking that the tournament would be short for the Dead. But then stunning back-to-back upsets of perennial powerhouses (ToRD’s Death Track Dolls followed by Montreal’s La Racaille) sent shockwaves through the tournament. Although their tournament ended in the quarterfinals, they acquitted themselves exceptionally well there, losing by 10 (88-78) to the Slaughter Daughters in the closest game of the round.

There are always so many breakout stories at the Beast that it’s hard to keep track. This year was no exception with Kingston’s Kazi anchoring the most surprising offense of the tournament, Rouge et Gore’s Minnie Small showing the depth of Quebec’s rotation, and the Slaughter Daughter’s Wreck Therapy emerging from Rideau Valley shadows, it was a weekend where new jammers stole the show.

But in one jam, Les Filles du Roi’s Le Grande Noirceur broke out in the biggest way. It was she who, despite an apparent upper-leg injury, flung herself viciously around the track on that final jam of the third-place game to win the beastly trophy for FDR. This is a story that close watchers of the eastern game have seen coming. First, at last year’s Clam Slam she surprised with her poise in the opening game, and then poured it on again at the Fresh and the Furious, playing for Quebec’s Les Bûches.

Actually, many of the breakout stories from this weekend can, not surprisingly, trace their tales back to last year’s Fresh and Furious. Kingston’s Kazi formed part of a strong—tournament winning—Capital City jammer rotation along with Labrosse and Kaio-kensi (both of whom also made their Beast debuts with their CCDD home team, the Beauty School Dropouts).

Story #4: The Return of the Slaughter Daughters

After completely rebuilding the roster two years ago, this Daughters team could have fallen into the “breakout team” category with their performance this year. Last season after a massive Rideau Valley re-rostering, the traditional powerhouses had slipped all the way to the bottom of the three-team league. But this team has rebuilt and rebuilt quickly. With two of (arguably) our nation’s top-ten jammers on the bench (Shania Pain and Melanie Austin[Tatious]), the Daughters stuck to their guns and kept those weapons in the pack (where they were awesome) and instead allowed their newer jammers to flourish; and flourish they did. Wreck Therapy, Angel Poison, and Knotty Knitter were solid all weekend (and got some great support from double threat Anderson). The pack was led by another new Vixen (and former junior skater) Jamie’s Got a Gun. The Daughter’s reemergence should make for a very interesting houseleague season in Ottawa in 2015.

In the end, it was another successful Beast, but then, that’s never truly in question. There’s been a power shift at the home team level with a Quebec taking over (it was the first time in five years a ToRD team did not make the Top 3) and fascinatingly, it’s not Montreal at the helm.

***As has become tradition, on Friday night Montreal’s New Skids on the Block hosted Toronto’s CN Power. It was another incredibly tight match-up between these two teams with The Skids eventually taking it by a measly 9 points (180-171) to maintain top spot in the country. Layer9 has posted his track-side footage; watch it here.