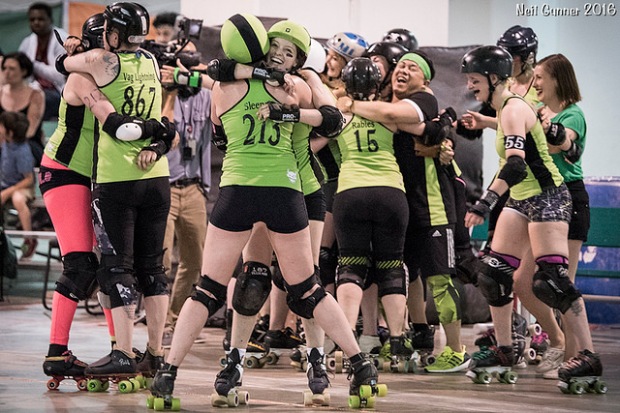 The moment of victory: 2016 ToRD champs Chicks Ahoy! celebrate the win moments after the final whistle. (Photo by Neil Gunner)

It should have been a disaster.

Over the opening 17 minutes or so of the 2016 Battle for the Boot, the Chicks Ahoy! looked like a team on the verge of a collapse. Over the course of those twelve jams the team had managed only four lead jammer statuses, two of which had been negated due to penalties, on top of that, the team had given up a nearly unbelievable eight power jams. One of their best blockers, Joss Wheelin, had picked up 6 penalties, and the 2016 ToRD regular season leading scorer Monster Muffin had already notched five trips to the box of her own. It should have been a disaster. 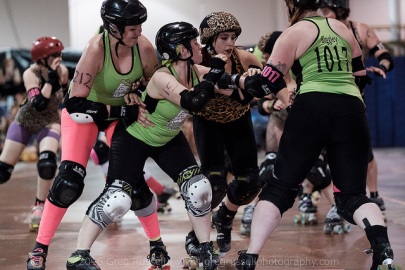 Gores’ Lexi Con scored 26 points in the first half, almost all within the opening 17 minutes. (Photo by Greg Russell)

And yet, with a 65% lead percentage and eight power jams, the Gore-Gore Rollergirls had managed to build only an 11-point lead, so when the seas finally settled, the game was the Chicks’ for the taking. And take it they did. The Chicks eventually righted the sails and took the lead three jams later. It was a lead that they would never relinquish, eventually cruising to a 164-88 victory to become the 2016 Toronto Roller Derby champions.

The historic 10th ToRD Championship was a fascinating game, fast-paced and low scoring, providing a fitting conclusion to what has been an excellent season that saw the re-emergence of the league’s two most successful teams. The Gores, who had upset the Chicks in the page-playoff quarterfinal, got off to the kind of start that they wanted. Although Monster Muffin had given the Chicks the lead with a 12-point opening jam (to the Gores’ 4), a Beaver Mansbridge 7-point power jam stole back the lead for the skaters in leopard print. The Chicks picked up jammer penalties on the opening two jams, then four jams later Muffin took back-to-back back blocking penalties followed by cuts to Boxcar and Pink Slamminade. The procession to the penalty box ended when Monster Muffin picked up a cut and then another back block on consecutive jams. 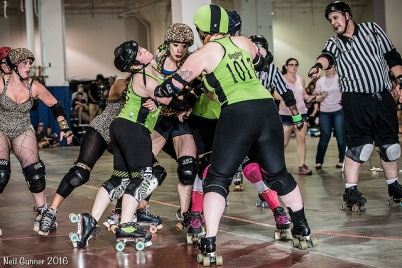 Rosemary’s Rabies, Biggley Smallz and Wheels of Misfortune wrap up Beaver Mansbridge; the Chicks defence was the difference maker in the game. (Photo by Neil Gunner)

However, the Chicks’ pack put in a monumental effort during the deluge and seemed to be one step ahead of their Gores’ counterparts all game. Both teams were riding short benches, but the Chicks core contingent of Biggley Smallz, Sleeper Hold, Rosemary’s Rabies and Joss Wheelin’ got extra playing time in the early going and were virtually impenetrable at times, frustrating the Gores’ jammers and constantly unsettling their packs. So when the penalty parade finally ended, the Chicks were poised to take control; and they did so in commanding fashion.

With their jammers on the track, the Chicks held the Gores scoreless for five-straight jams, a stretch that saw them retake the lead with a 16-0 run. The Gores were actually only able to score 10 points over the final half of the first period while the Chicks notched 36 over that stretch. The lead was narrow on the scoreboard at the break, with the Chicks leading 76-61, but the gap on the track was clearly widening. 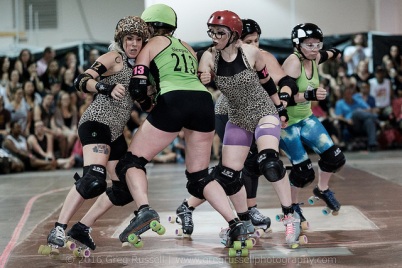 Viktory Lapp attempts to free Jill ‘Em All from Sleeper Hold after a Gores’ star pass. The Gores were forced into 10 star passes during the game. (Photo by Greg Russell)

The old sports cliché is that while offense might win games, defense wins championships, and that was never more evident than in this game. For example, Beaver Mansbridge was dominant this season: second in the league in scoring (197 points) and first overall in lead percentage (72%), but after going 4 for 4 out of the gate for 19 points in the championship game, she was shut down mercilessly by the Chicks’ defense; she went 1 for 7 the rest of the way and managed only 6 more points. Similarly, the team’s leading scorer in the game Lexi Con, scored 26 of her 38 points in the first half, mostly during that opening string of power jams. Indeed, the Gores were held to only 27 points in the entire second half—easily the team’s lowest-scoring half of the season—and 37 points over the game’s final forty minutes.

So sound was the Chicks’ packs that they were able to bench Monster Muffin for the entire second half (she picked up her sixth penalty as a blocker early on) relying on Boxcar (64 points on a 71% lead percentage), who didn’t even begin the season in the rotation, Pink Slamminade (44, 67%), who missed the whole regular season due to injury), and Banshee (38 points), who is playing with a poise that belies her rookie status. It was an impressive performance from the rotation, stepping up to carry the load that Muffin had propped up so formidably all season. And the team also got strong play across the bench, notably from a controlled Vag Lightning, Annguard (playing arguably her best game of the season) and Francesca Fiure, who returned from injury just in time for the Battle for the Boot. 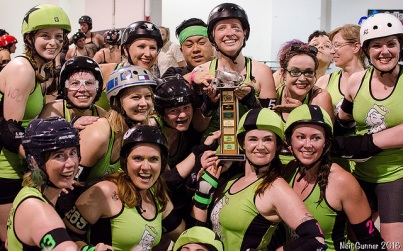 The Chicks Ahoy! hoist the Boot for a record-setting fourth time in ten years. (Photo by Neil Gunner)

In the game the Gores had three skaters on the track from the team’s last championship win back in 2010, and while Santa Muerte, Chronic and Jill Em’ All played their hearts out, Santa, who missed virtually the whole season, lacked her usual spark on the track, the lack of track time evident as she struggled in the second half, particularly as a relief jammer. The Gores, who battled through serious injuries and inconsistent rosters all season, looked much “looser” on the track than their Chicks Ahoy! counterparts, who did not face the same adversity this season and peaked at the right time, playing their best derby in the semifinals and then finals. Although it should be noted that they were without long-serving Robber Blind, who was trackside due to injury, but who collected her third Boot with the win as she was the sole remaining member of the Chicks’ 2011 championship team.

However, the Gores accomplishment cannot be overlooked. This season the Dynasty qualified for its ninth championship game in ten years, capping an unbelievable run of consistency. Yet the Boot still eludes them and instead, it’s their chief rivals (playing in their also impressive sixth champs), who sail away with the win and claim their record-setting fourth Battle for the Boot victory.

*The game was filmed by Rogers TV; stay tuned to local listings for replays. Also, make sure to check out Layer9.ca’s trackside footage.

*The ToRD houseleague season may be over, but there’s lots more derby left to be played in 2016! Next up, on June 30, is the annual Pride Affiliate event newly renamed Roll Out. The D-VAS will be in action at the Fresh and Furious on July 9th.